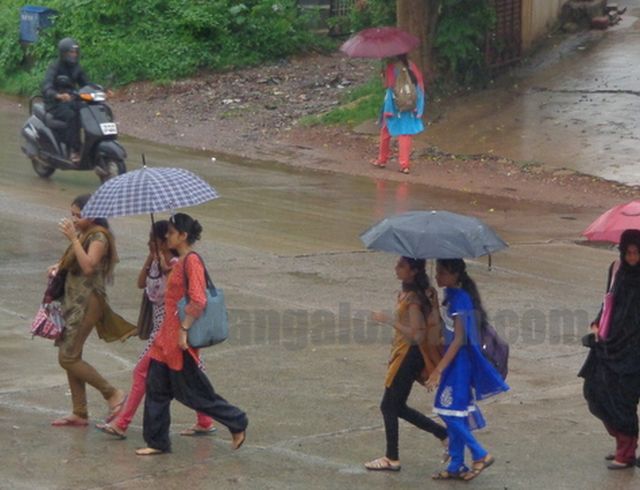 I have heard so from old people that Mangaluru does get a bit of rain just as a cool off in the month of April. But the Rain Gods really don’t seem to get the idea of April fool’s day. It’s celebrated only on the first of April and not dragged on for an entire month.

If I ask you to picture a person waiting for rain, chances are that you will imagine a farmer in his field looking up at the sky and praying for the rains. That is not the picture you will see in Mangaluru. Here you will see sweaty, unhappy people yet innovative enough. With the alarmingly low water levels at the dams, the MCC has decided to supply water on alternate days. As far as I have observed, we are quite innovative to squeeze even the last drop of water and make it last till the next supply comes.

MCC has flung into action and supplied water by hiring water tankers, drilled fresh bore wells, cleaned pipelines, and wells. Industries are barred from lifting water from the river Nethravati. But many feel that the MCC should have taken these measures well in advance. They should have reflected on the meteorological department reports and works should have commenced from January.

Of course, there are a few who do not think water as a vital resource. I have seen water tankers carrying water which spills on the roads due to leaks or faulty valves. This should not be an excuse. Have you ever seen a petrol or LPG tanker spilling fuel on the road? There are a few who in spite of the shortage of water, use water to settle the dust in front of their shops or wash their vehicles. Who is to be blamed? Should we rely on the authorities to stop them? Because I don’t think they have a good record of keeping vigil.

I read an article which revealed how the hotels have been serving food in paper plates to avoid wasting water on washing plates. When I went to a hotel I was served rice water (water left after boiling rice) instead of the traditional glass of water. I remember listening to ‘Mann Ki Baat’ last year, in which the Prime Minister had stressed on being selfless and caring about other animals as well. I have kept a pot of water in my compound for crows and other birds to come and have a drink.

Who is happy when there are no rains? I can think of a few. You remember the nursery rhyme ‘Rain rain go away. Come again another day. Little Johnny wants to play.’? There are a few ‘Little Johnnys’ who are still around playing cricket. It is summer vacation and they are quite lucky to get a dry field. And with the IPL going around, there are many cricket enthusiasts who wouldn’t be so kind on the Rain God for cancelling a decider match.

Meetings with the heavenly provider have been arranged by the leaders of all religions. Every year with a hope of pleasing him. This year Mangaluru saw prayers being offered at the Kadri temple, South Karnataka Salafi Movement offered a prayer service at the Nehru Maidan and all churches make a special mention seeking rain during Sunday service. When it comes to water, we have witnessed all religions coming in the same footing. This can be well treated as a sign from above.

The Yettinahole agitation has got a new face lift. Netravati Rakshana Samyukta Samiti (NRSS) has been formed, uniting all organizations. The parched region is a new weapon in their arsenal. NRSS says that with the implementation of Yettinahole project, the coastal region will dry up. If they are right, then we are heading to a huge pitfall. NRSS hopes to sensitize the people of this region with this vital idea of ‘What if?’

Today when I came out to my office I spotted a few clouds. Has the Rain God finally decided to cease the prank? What if it rains tonight? My weather app doesn’t say so. But what if it does? Rain rain go away, come again another day? Perhaps no, not this time. Little Johnny rather, not play.