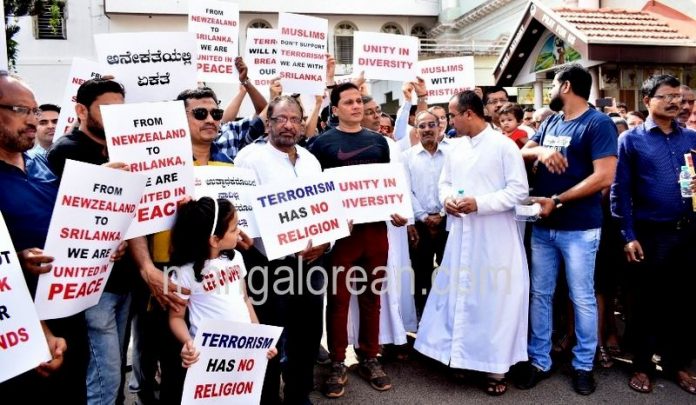 Mangaluru: In the view of serial blasts that took place in Sri Lanka, including Churches and hotels, City’s Muslim community members gathered at Milagres Church, Mangaluru this morning (Sunday 5 May), to show their solidarity with Christians (Roman Catholics) who had perished in the bomb blasts at two Catholic churches in Colombo and Negombo-Sri Lanka on Easter Sunday. On 28 April 2019, Team Mangalorean had published an article “https://www.mangalorean.com/not-all-muslims-are-jihadists-in-uae-a-mosque-is-renamed-as-mary-mother-of-jesus/”, which sent a clear message that the world should not blame the whole Muslim community for a attack on Christians undertaken by a section of Muslim community, who call themselves Jihadists or Muslim extremists. 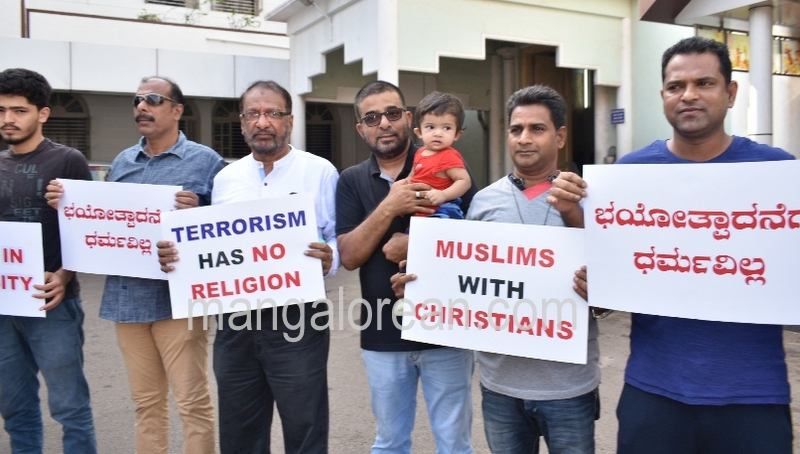 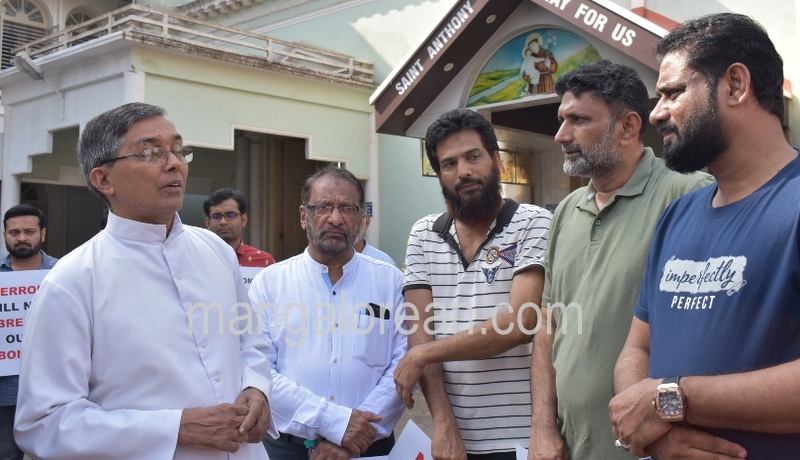 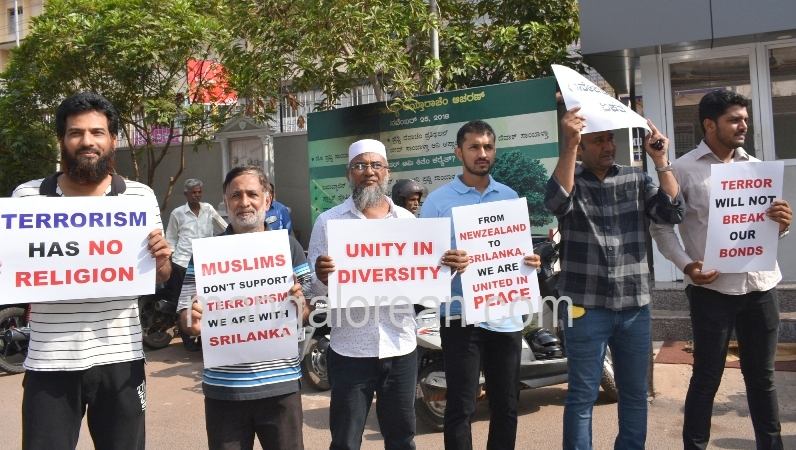 This morning, the gathering comprising mostly of members belonging to the Muslim community, held aloft placards pledging to stand united with the people of the island nation in grief and sorrow. To highlight a few placards, stated “Muslims Don’t support Terrorism”; We Are with Sri Lanka”; “Terrorism Has No religion “; “Muslims with Christians”; “”Terrorism will Not Break Our Bonds”; “From New Zealand to Sri Lanka, We Are United In Peace”; “Unity In diversity”, among many others. “We say yes to love and peace and no to terrorism,” stated a placard which was held a small Muslim girl. Representatives of the Muslim community had apparently taken inspiration from a similar expression by different communities after Muslims were gunned down in mosques in Christ church in New Zealand a few weeks ago. 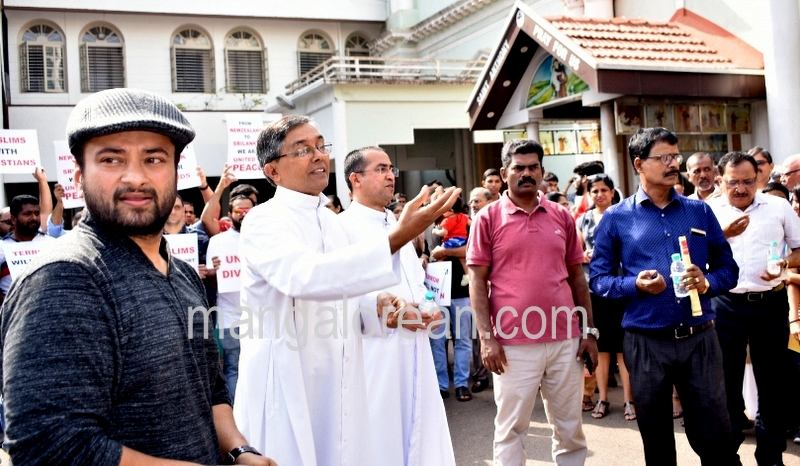 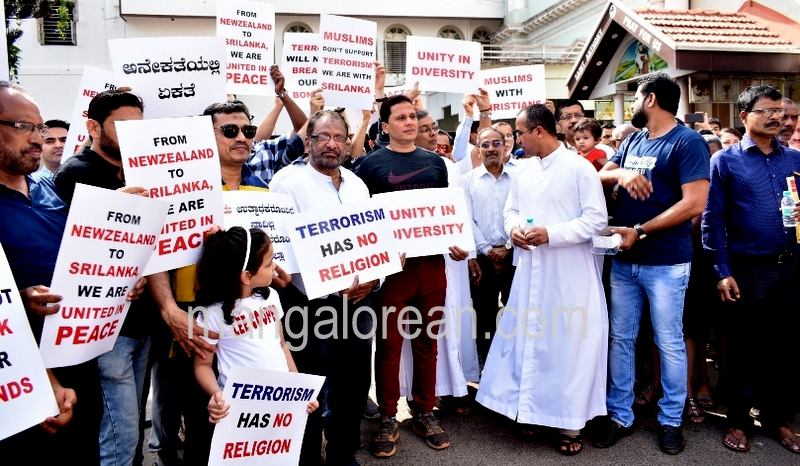 The main reason the local Muslims had gathered outside the Milagres church this morning to send out a message that they were against such inhuman acts, and also to send a message that it was only a small section of the Muslim community who had involved in this brutal attacks, and that the whole Muslim community should not be blamed for that cowardly act. It is not right that every time an attack is carried out by Muslim militants, people see collective blame rear its head after an act of terror committed by a member of the Islamic faith. “Most Muslims are peaceful, but until they recognize and destroy their growing jihadist cancer they must be held responsible. There’s nothing logical about condemning millions of people — who are spread across the globe and are unrelated to each other except by religious tradition — for the actions of a few. 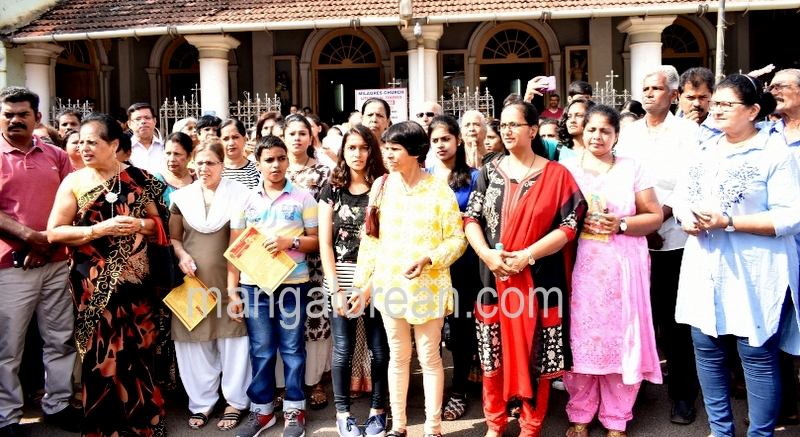 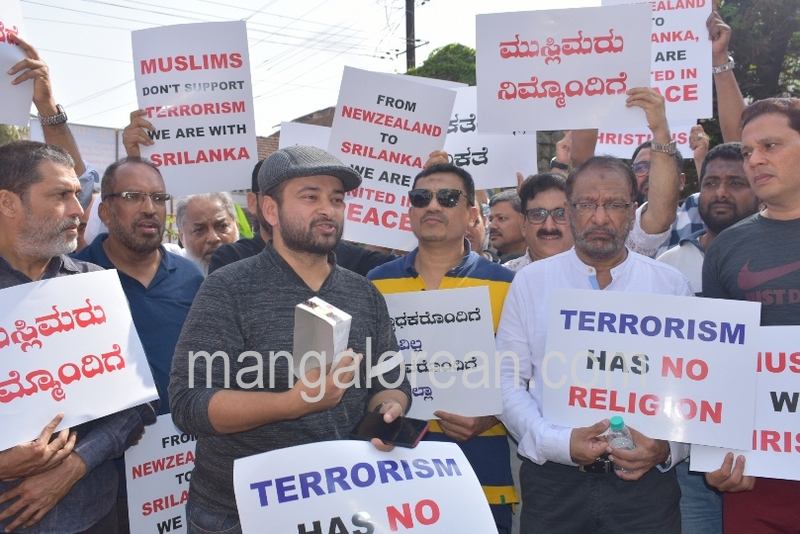 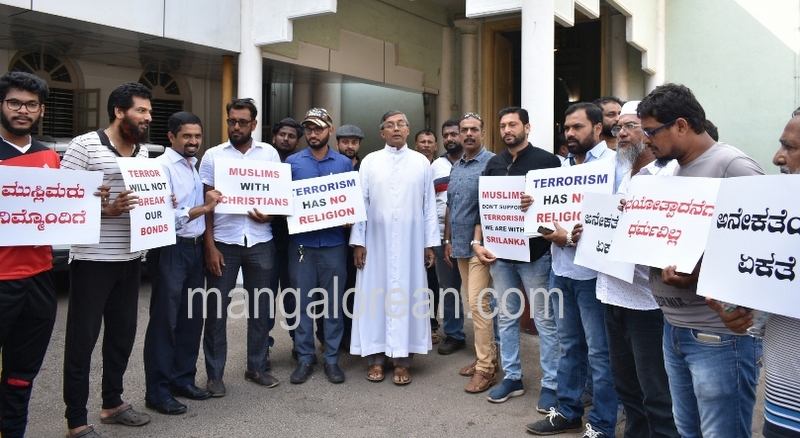 The gesture by the City’s Muslims was appreciated by Fr. Valerian D’souza- the Parish priest of Milagres Church, and Assistant Parish Priest Fr Edwin Monis. Addressing the faithful who had gathered in the Church premises after attending the Sunday 8.15 am Sunday mass, Fr Valerian D’souza said, “We as Catholics should not blame the entire Muslim community for brutal attacks undertaken by a Muslim extremists group. There are very good Muslims who are very supportive of the Catholic community in Mangaluru, and we should appreciate their contribution. This is indeed a kind gesture from the local Muslim community by organizing this peaceful gathering, in order to bring awareness about unity, peace and harmony that needs to be followed for a better living. We all definitely want peace and let us all stay united.”.

People who engage in collective blame of Muslims are more likely to agree with statements like, “We should ban the wearing of the Islamic veil,” and, “We should ban the opening of any new mosques in this country.” If you collectively blame an entire group for the actions of individuals, it makes it totally reasonable to exact your revenge from any person from that group. You get a cycle going on where each cycle is motivated to commit violence against totally innocent members of the other group. Again, the key to this exercise is that you can’t start by calling someone a hypocrite outright. You have to lead them to that thought. So people should think before criticizing a particular community, just because of a few perverts, hypocrites, and terrorists in that community.

Ever since the attacks in Sri Lanka by Muslim Islamists, many Muslim organizations, leaders from Muslim countries have condemned the act, and have assured full support to the Sri Lanka government and Sri Lankans. Even in Mysuru, a Muslim organization had a silent protest condemning the brutal attack in Sri Lanka. on Sunday, April 28, where hundreds of Muslims had gathered outside the iconic St Philomena’s Church, Mysuru as a mark of solidarity with Christians.

Today’s gathering at Milagres Church, by the members of the Muslim community hailing from the City aimed to impart a powerful message among the Citizens that ‘hate cannot divide unity’. Just like the recent attacks on Christians in Sri Lanka, a similar attack had happened at a mosque in New Zealand, and people from various communities stood with Muslims in solidarity. While around 350 people lost lives Sri Lanka’s bomb blasts, it may be recalled that fifty people were killed when a gunman fired at two mosques at Christ church in New Zealand during Friday prayers on 15 March 2019. So hate against religions of different faith happens, no matter what- and Sri Lanka attacks are one of them.

Speaking to Team Mangalorean, Qasim Ahmed-the Founder of NGO named ‘Hidayah Foundation’ said “We want to convey the message that Muslims share the pain of the Christians and we express full solidarity with them. And we want to live in unity and in harmony and peace in this City, without looking forward to any communal disharmony. We the Muslims and others in the City are with the Christian brothers and sisters,”. Abdul Hameed-President of Kanara Chamber of Commerce and Industry said, “It’s sad to note that suffered an appalling attack on Easter Sunday. Churches were attacked while their congregation was in worship. Many problems in the world stem from prejudices, presumptions and misconceptions about other religions or ethnic groups. The best way to remove all this is to learn from each other, and about other religions”.

Saif Sultan, of Hope Foundation, and a soft skill trainer said, “We want to convey the message that the Muslims and others are with the Christian brothers and sisters. We the Muslim community are thankful to the parish priest of Milagres Church in allowing us to spread the message of love and unity between Muslims and Catholics. Let us all live in peace and harmony, and let us not look forward to any untoward incidents that would break our bonds”. Dates and bottle of water were distributed to the Catholic faithful, as they walked out of the Sunday Mass.

While appreciating the kind gesture of the Muslim community in organizing this peace gathering, wouldn’t it be nice to “STOP” HATING, CRITICIZING & showing ANGER against Muslim Community just because of the disharmony, hatred and attacks created by a small group from that community? I hope that you all will agree with me on this subject!