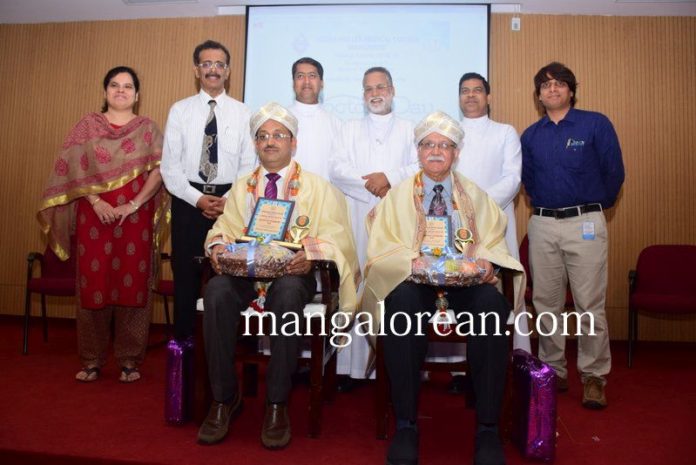 Mangaluru: Seems like it is “Doctor’s Day” every day at Father Muller Medical College and Hospital, for their dedication, commitment and Sacrificre- and as they say, ‘Better Late Than Never”, Doctor’s Day which is suppose to be celebrated on 1 July, was observed today, 8 July by Father Muller Medical College in its Clinical Society Meet of 2018-2019 and in association with the Department of Biochemistry. The venue of the meet was in the conference hall attended by all the Doctors serving the Institution. The Doctors were florally welcomed with a red carnation for it being the symbol of the doctors self-sacrifice. 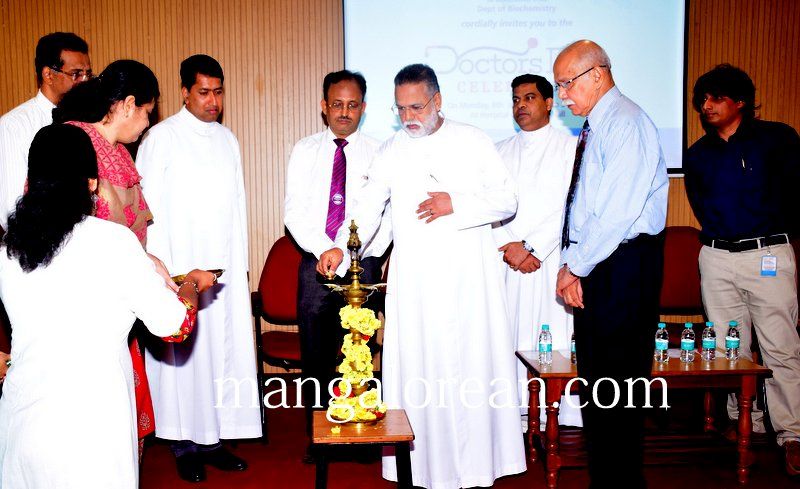 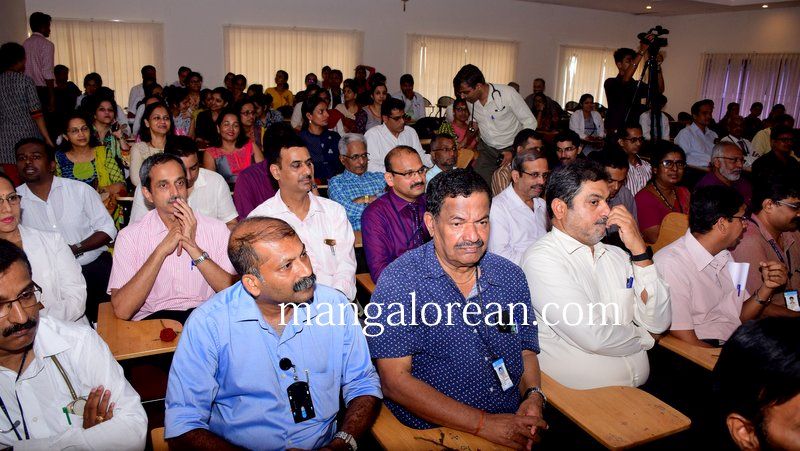 ‘National Doctor’s Day’-this day is observed every year on July 1 to raise awareness about the importance of doctors and medical professionals in our life, and the Day is observed to thank physicians and doctors for their dedicated services to patients. After all, they have looked after us in our worst times. National Doctor’s Day is an opportunity to the people to express their gratitude towards Doctors. This day is dedicated to all medical professionals who work and serve patients round the clock to save lives. Doctor’s Day 2019 is being celebrated for acknowledging services of doctors and their huge contribution to the medical advancement in India. 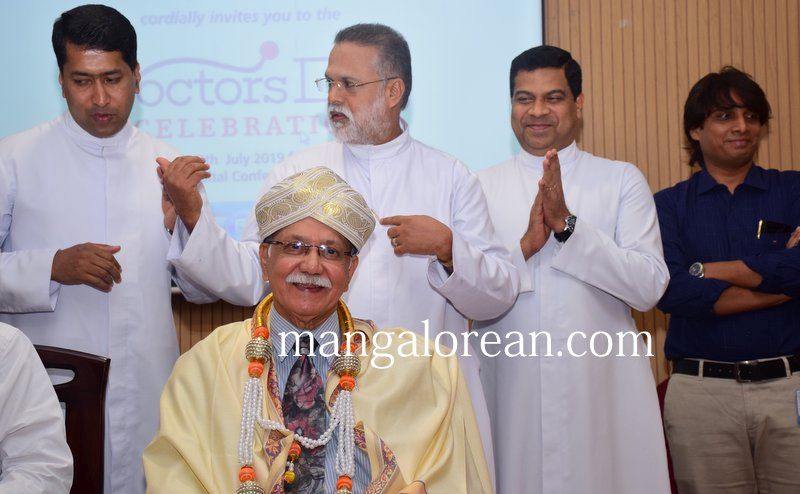 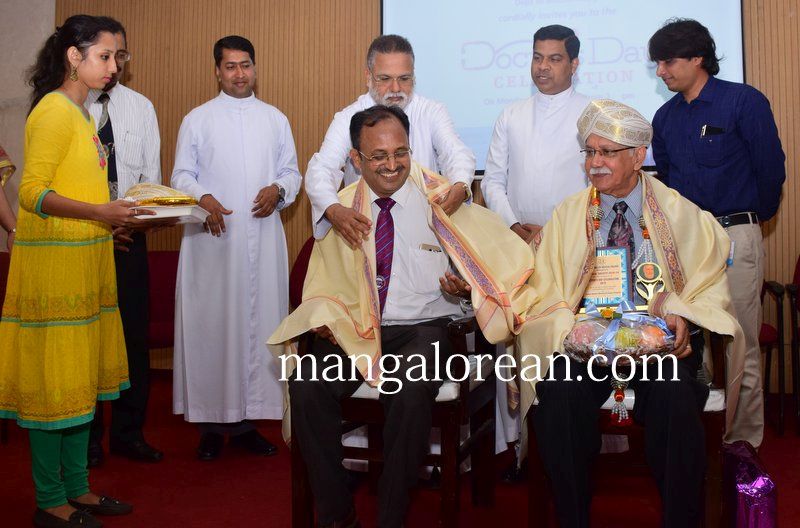 This year the Doctor’s Day 2019 Theme is “Zero Tolerance To Violence Against Doctors and Clinical Establishment”, and The theme will raise awareness about the violence happening with the doctors across India. Recently, violence against doctors in different parts of India was making headlines. Keeping in mind the safety and security of doctors during their working hours this theme was announced. In India the National Doctors’ Day is celebrated on July 1 all across India to honour the legendary physician and the second Chief Minister of West Bengal, Dr. Bidhan Chandra Roy. India has shown remarkable improvements in the medical field and July 1 pays a perfect tribute to all the doctors who have made relentless efforts towards achieving this goal irrespective of the odds. 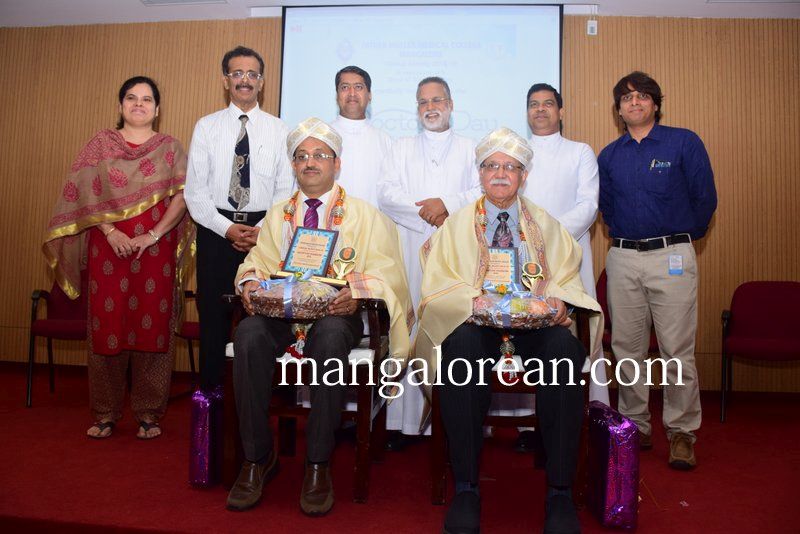 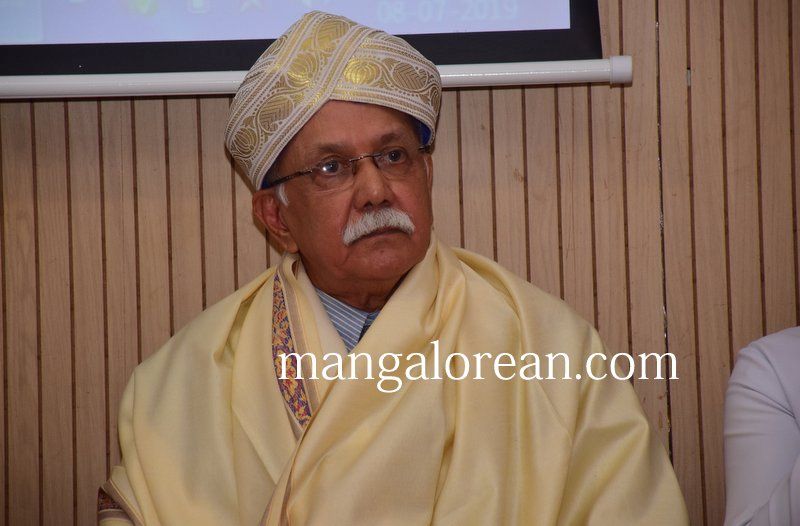 The programme began with a prayer to invoke God’s blessings, and the inauguration was done by lighting the lamp by the chief guest for the day Fr Richard A Coelho, Director, Father Muller Charitable Institutions along with the two guest of Honors, Dr Alfred Farias-Consultant cardiologist, FMMCH, and Dr Ramesh Bhat,-Professor in Dermatology-FMMCH and Director of ILDS; Administrator Rev Fr. Rudolph R D’Sa; Administrator Rev Fr Ajith Menezes, the Dean of the Medical College-Dr J P Alva; Dr. Malthi M, Professor and Head, Department of Biochemistry; and Dr. Avinash S S, Associate Professor and President of the Clinical Society. 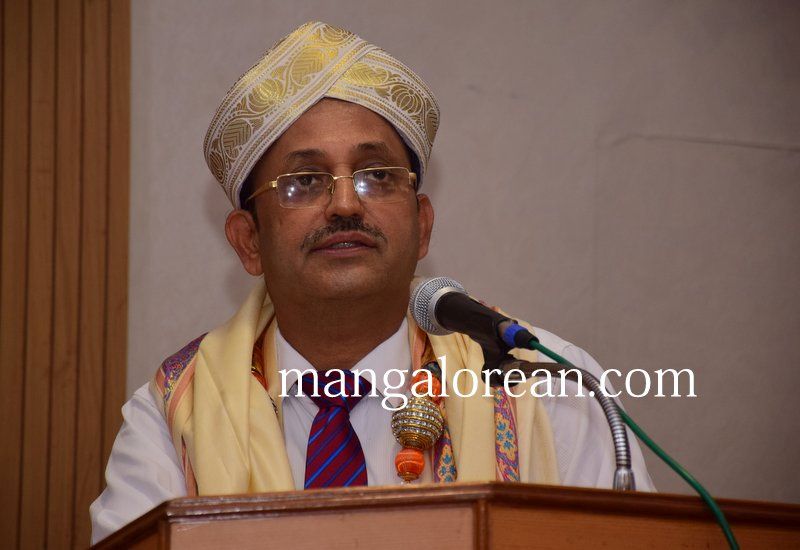 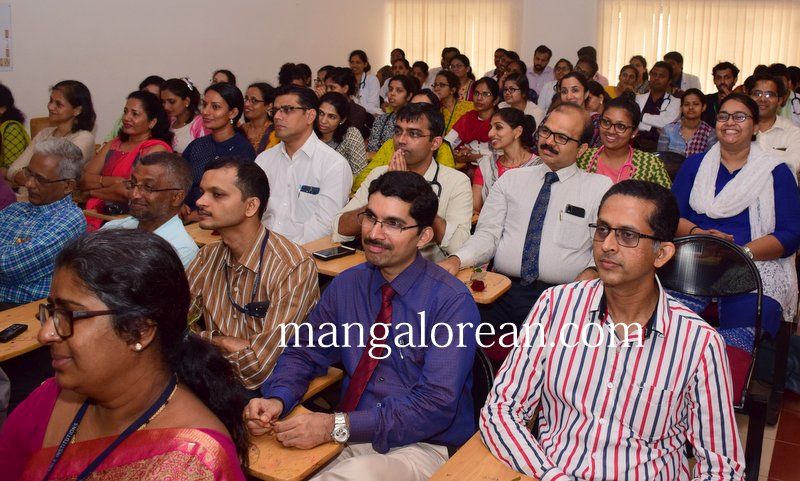 The welcome address was delivered by Dr. Avinash S S, and Dr. Malathi M, introduced the guest of honor Dr Alfred Farias; and Dr Jacintha Martis introduced to Dr Ramesh Bhat. Dr Alfred Farias, was introduced to be a humble, kind-hearted person with a humane touch. He is the Senior Consultant Cardiologist at Father Muller Medical College Hospital. Dr Alfred young at heart and a devotee to his work was an alumni of CMC, Vellore and after completing his post graduation in the year 1972, worked for five years at CMC and then joined at Father Muller Hospital in 1979 up to 1985. He had a brief stint thereafter in UAE and later joined back Father Muller Hospital still rendering his service. He is a compassionate doctor with great fondness for music and history. His humility has made him the choicest of his patients. 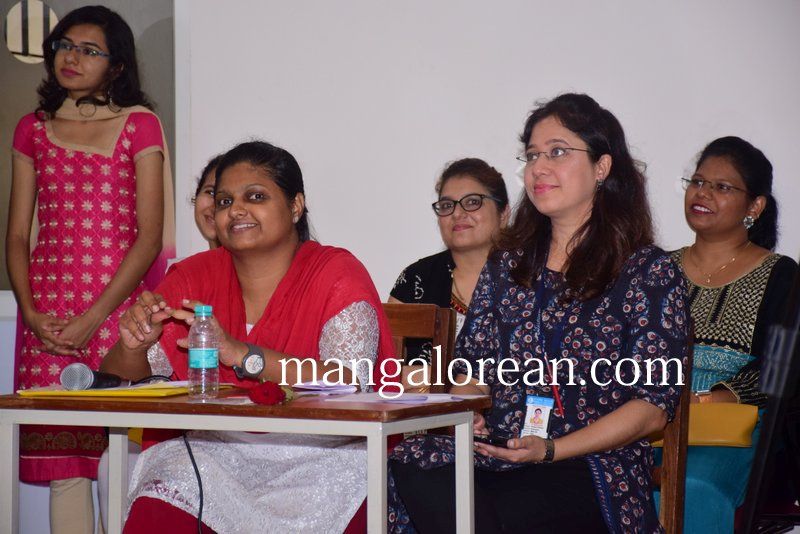 Dr Ramesh Bhat, had completed his MBBS from Bellary Medical College in 1987, DVD from KMC Mangalore, MD from BMC Bangalore and DNB from National Board, New Delhi in 1993. He joined Father Muller Medical College as an Assistant Professor and was Head of the department from 2009-2016 and still rendering his service to the institute. He has held the various post as the National President 2018, Indian Association of Dermatologist, Venereologists and Leprologists (IADVL), joint secretary IADVL in 2005, Honorable General Secretary 2010 of IADVL, President of Indian Association of Dermatologist, Venereologists and Leprologists, Karnataka Branch, and so forth. He has received many awards, to name a few, IADVL Fulford Oration 2007, Dr L N Sinha Memorial Award for outstanding young dermatologist, Dr Shivkumar Oration Award , ISD Fellowship 2009, Prague, Fellowship EADV 2011 Lisbon, Professor Ratan Singh National Award, B V Sathyanarayan Memorial Oration Award, Professor L K Bhutani Memorial Oration Award. He has been of late made the International Director of the International League of Dermatologists 2019 at Milan, being the only one from India in its history. He has contributed immensely in the academic arena with 119 publications of repute, reviewer to scientific Journals, resource persons to CME, conferences, member of various board of studies, author of 5 textbook chapters, an investigator in clinical research. Both the guests of honour were felicitated with the traditional style by the Director of Father Muller Charitable Institutions along with the dignitaries on the dais.

In his acceptance speech, Dr Alfred said that he felt overwhelmed with the honour and felt humbled to be done so by his colleagues in his own institution. He said that the perception of doctors in the general public was going down with manhandling and assaults on doctors taking place every single day. The medical profession is not being considered as the envied noble profession but as any other blue coloured profession, a thing which is not encouraging. He said that medicine nowadays has become impersonal, the very strong bond between doctor and patient is weakening, the trust and confidence that the patient had in their doctors is eroding with second and sometimes third opinions by the patient. This could be because of the lack of communication between the doctor and the patient, because the time spent in consultation has become less and there is no place for the patient to talk about his fears and problems. This has led to patients being abusive. To this he said that the doctor needs to take time to understand why the patients have come to him, reassure them and make them feel much wanted, show them more compassion and empathy and thereby gain their confidence, and in doing so we may get back to the very high pedestal to which the doctor was placed.

In his presidential address, Director, Fr Richard A Coelho, wished the doctors a happy day and thanked them for their service to this institution and mankind. He also thanked the guest of honours for their service and commitment towards the institution. He thanked Dr Alfred for being the most compassionate and committed doctor and to Dr Ramesh, being a great academician and helping the Father Muller name spread nationally and internationally. To the doctors he said, he on behalf all the administrators applaud the service and commitment that they put into their work with many years of service. He said that even after leaving the institution for various reasons many have sought to come back to its fold as they were treated here as a FAMILY. “The respect for each other is appreciated here. Further, the institution year by year has made a lot of stride and is a beacon of a resounding medical college example. The work of commitment and service should continue even though the doctor fraternity is blamed for the silliest of things” he added.

Fr Coelho recognized the efforts put in by doctors who leave family function, attend patients at the dead of night at the hospital. The human person is what the patients want to see. A good communicator is also required in a doctor and the senior doctor needs to be the torchbearers. The visit of the senior doctors makes a difference in a patients life. The poor patients in general wards become the ambassador of the doctor unlike the rich who say it is being paid for. Being a Catholic institution of the Mangalore Diocese we give importance to ethics, principles and commitment and expect the same from the doctors and allied staff.

He mentioned that during the Sunday Eucharistic mass and the evening prayers of the priests at their residence the doctors, nurses and technicians are prayed for, so that God may heal the patient through the instruments of the doctors and become the human instrument of God so that the power of God goes to the patients through the doctors and other health care fraternity.. He mentioned proudly that many doctors children are keen on studying at Father Muller and some of them will be pursuing their post-graduation here. Lastly, he praised the doctor for their service and compassion.

The vote of thanks was delivered by Dr Ramlinga Reddy, secretary of the clinical Society meet. All the doctors and senior faculty were present for the celebration.