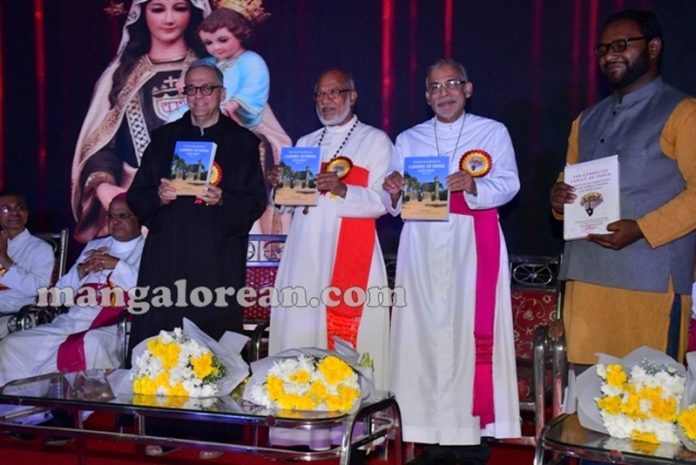 Old Goa: “We need to deepen our faith in Jesus and witness him through our humble, selfless and caring service to those who are underprivileged and those who are on the peripheries of our society.” said Archbishop Filipe Neri Ferrão while delivering a homily on the theme: “All is grace.” Archbishop Filipe Neri Ferrão presided over the Eucharistic celebration to mark 400 years of Discalced Carmelite presence in India. Bishop Emeritus of Mangalore Aloysius Paul D’souza, Bishop of Karwar, Most Rev. Derek Fernandes, Superior General Rev. Dr Saverio Cannistra, General Definitor for India Rev. Dr. Johannes Gorantla, Assistant Superior General Rev. Dr. Agusti Borrel, Superior General of the Carmelites of Mary Immaculate Rev Dr. Paul Anchandy, Provincial of Karnataka-Goa province Fr. Charles Serrao, Convenor of the Steering Committee formed for the Celebrations of 400 years of Carmelites presence in India Rev. Dr. Archibald Gonsalves and 208 priests concelebrated the Eucharist. Stating that God has blessed the entire church in India through the presence of Carmelites., asked the entire Carmelite family, asked them to continue their service to the Church.

Archbishop reflecting on Mother Mary’s Magnificat, he said that Mary expressed her faith through her faith in God, through her joyful and selfless attitude and through Magnificat which she sang in response to the praise of Elizabeth. “There is a loveliness at the same time dynamite in Magnificat, so our faith in Jesus should lead us to the radical transformation in world and in those around us. “ Archbishop opined further.

Assistant to the Parish Priest of Se Cathedral, Fr. Seby Vaz who led the liturgical singing during the Eucharist, express his words of gratitude on behalf of Parish Priest and the parishioners. Br. Jeswin Benoy of Karnataka-Goa province was the liturgical commentator while Fr. Sylvester D’souza and Fr. Joaquim Rodrigues animated the liturgy. Convenor of the steering committee Rev. Dr. Archibald Gonsalves spoke on the occasion

His Eminence George Cardinal Alencherry was the chief guest for the programme after the mass. Archbishop Filipe Neri Ferrao and Bishop Derek Fernandes and Bishop Emeritus were the Guests of honour. Cardinal Alencherry released the new book– The first foundation of Carmel in India authored by John Marshal. Coffee table book and a souvenir were released by Bishop Derek Fernandes and Rev. Fr. Paul Anchanady. Speaking on the occasion Cardinal Alencherry, recalled the contribution of the Carmelite in Kerala and appreciated their service to humanity. He expressed his gratitude to them. Bishop Derek gave brief history of the Carmelites in Sunkery (Karwar diocese). ” They struggled to preached the Good News of Jesus Christ,” he said

This was followed by light and sound programme solo Dios Basta (God alone suffices) by Dr. Allan Tavares sfx. depicting the history and mission of the Carmelites in India.

Carmelites in India not only survived but flourished in the last 400 years: Carmelite Seminar

Old Goa: Stating that every 300 years, religious life has changed into better or worse. Carmelites in India not only survived but flourished in the last 400 years.” Said Rev. Dr. Prasad Theruvathu of Manjummel Province of the Carmelites while presenting a paper on Challenges of Carmel in India today. The first 300 years were the era of missionaries and the last 100 years the period of native Carmelites.” He said recalling the past. According to him, religious life is at the crossroad globally.

Carmelites in India organised a seminar on the theme: “ 400 years of Carmelite footprints in India.” There were 7 papers presented dividing into three sessions. Presenting on the Carmelite contributions in the social apostolate of the Church in India, Rev Dr (Sr) Tresa CSST said that Carmelite in India has contributed in the field of education, health care, charitable works, publications, researched areas in secular and social science subjects.

Dr. Fatima Gracias, while presenting the historical background of the arrival of the Carmelites in Goa, focussed on the hardships faced from the Portuguese King by the Carmelites to begin their foundation in Goa. Mr. Fernando Velho, gave in a nutshell the Architecture of the Convent of Nossa Senhora do Carmo, Old Goa and Church and Convent of Nossa Senhora do Carmo, Chimbel by the Chimbel Carmelites.

The sessions were moderated by Mother General of the Congregation of the Sisters of St Teresa, Sr. Chris CSST, Superior General of the Carmelites of Mary Immaculate Fr. Paul Anchady CMI and Assistant General of the Sisters of Apostolic Carmel, Sr Mabilia A.C. Three books—From Darkness to light (translated) by Fr. Francis Chittuparambil, St. Teresa of Avila– Foundress and Mystic by Rev. Dr. Peter Chakiath and Upanisads and Edith Stein by Fr. Thomas Marottipparayil, were released during the seminar.

Bishop Emeritus Most Rev Dr. Aloysius Paul D’souza, speaking on the occasion, appreciated the selfless service of the Carmelites in India, diocese of Mangalore and Udupi. He recalled the historical aspects of the Carmelite in Mangalore. Fr. Noel D’cunha, compered the seminar.

Old Goa: “I am elated to see the number of young Carmelites in India showcasing their talents. Be exemplary to form the young and take responsibility form them by good and sound formation.” Said Superior General of the Discalced Carmelites Rev. Dr. Saverio Cannistra to the more than 800 members of the Carmelite family present for the seminar at Se Cathedral Compound. He asked the Carmelites to give the spiritual formation and tell them what it meant to be a Carmelite. “ Contemplation and Apostolic life are the two dimension of our life.” He said further. While focusing on the theme of the Carmelite Seminar—“ 400 years of Carmelite footprints in India” he said that the first Carmelites were guided by the Holy Spirit. As the disciples of Jesus, gave themselves to the Lord, he appealed the Carmelites gathered to respond to the Call of God not by doing activities but by giving themselves to the Lord.