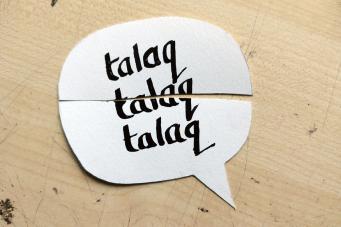 Woman gets triple talaq over phone from husband in Saudi

Kushinagar (Uttar Pradesh): The Kushinagar police have registered a case against a man who allegedly gave talaq to his wife over phone from Saudi Arabia.

This comes three days after the Triple Talaq Bill was passed by both the Houses of Parliament and got the President’s assent.

According to reports, the woman’s father submitted a written complaint to the police on Saturday following which an FIR was registered against the husband under Section 4 of the Muslim Women (Protection of Rights on Marriage) Act, 2019, at the Nibua Naurangiya police station of Kushinagar district.

The accused Abdul Raheem, son of Tarabuddin, a resident of Shobha Chapra village under the Nibua Naurangiya police station in Kushinagar, said talaq three times to his 25-year-old wife Fatima Khatoon over phone on Wednesday and ended the call.

Fatima, daughter of Ahmad Ali, had got married to Abdul in 2014. After four months of marriage, Abdul went to Saudi Arabia to work and came during vacations but his behaviour with Fatima was not good and even his family members harassed her.

“On Wednesday, my daughter was doing household work when her father-in-law Tarabuddin came and handed her his phone, telling her to talk to Abdul who said talaq three times and ended the call.

“Abdul’s father called a panchayat, took my daughter’s thumb print on a paper and handed her a cheque of Rs 1.5 lakh, saying the marriage was over,” said the victim’s father.

R.N. Misra, Superintendent of Police, Kushinagar, said, “Taking action on the complaint of the woman’s father, a case has been registered against the woman’s husband under Section 4 of the Muslim Women (Protection of Rights on Marriage) Act. We are probing the role of all the people involved and are taking statements of both sides. Since the accused is in Saudi Arabia, we are sending notice through proper channel.”

UP all set to host 11th edition of DefExpo