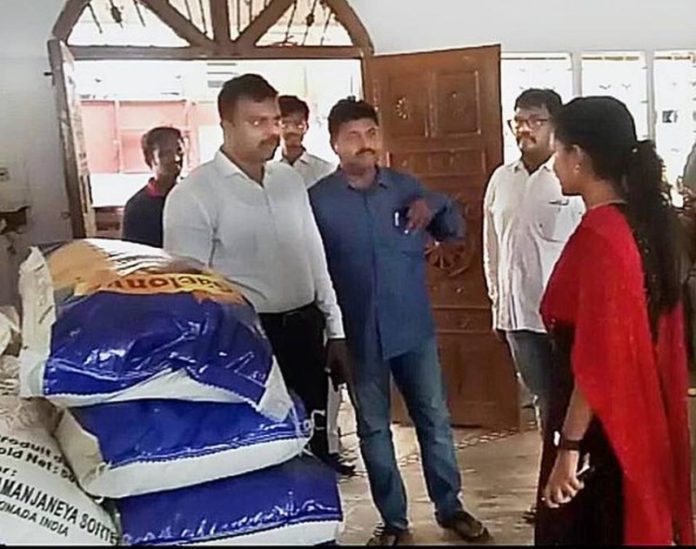 Acting on reliable information about the alleged diversion of rice provided by the government for mid-day meal scheme, a team of officials from the vigilance and enforcement, and civil supplies departments conducted a surprise check on the ISKCON premises at Sagar Nagar in the city on Monday night and seized 396 bags of rice weighing around 19.8 tonnes.

The officials said that they found labourers loading rice bags to a lorry and by the time, they raided the premises, around 110 bags weighing around 5.5 tonnes had been loaded. Its estimated market value would be around ₹5.94 lakh, the officials said.

“During the inquiry, the lorry owner Gavara Eswar Rao and his aide Kalasi V. Sanyasi Rao alias Sunny said that the mid-day meal rice was being packaged and the stock was supposed to be shifted to Kakinada,” said vigilance Inspector Mallikarjuna Rao.

As per the vigilance officials, Shyam Sundar Priya Das, a priest of ISCKON, was suspected to be diverting the rice issued by the government.

Apart from the 110 bags of rice loaded to the lorry, the officials also found another 286 neatly packaged bags reportedly stuffed the mid-day meal rice.

“In total, 396 bags of rice weighing around 19.8 tonnes, another stock packed in 888 gunny bags issued by the Civil Supplies Department and the lorry have been seized. The rice was being shifted from gunny bags issued by Civil Supplies Department to plastic bags and the stock was ready to be transported. But, the officials foiled the bid,” DSP and in-charge RVEO (Visakhapatnam) K. Sravani told The Hindu.

The plastic bags had the words ‘Saelony and Export par Sri Sitaramanajaneya, Kakinada’, printed on it which made the officials conclude that the stock was being shifted to Kakinada. “However, it is to be verified further,” said the vigilance officials.

‘Register not maintained’
“ISCKON also supplies mid-day meals to some school. But, we found out that it has not maintained the stock register after March 2019. The Education Department officials including the MEO have not inspected the stock after February,” Mr. Mallikarjuna Rao said.

A case under Essential Commodities Act 1955 is being registered with the District Collector’s Court.

The team of civil supplies officials was led by DSO K. Nirmala Bai. Further investigation is on.

‘Rice donated by devotees’
However, the ISCKON officials refuted the allegations of diverting the mid-day meal rice, claiming that the seized stock was donated by devotees and it was being exchanged for better quality of rice for preparing ‘prasadam’.

“The rice stock were donated by devotees and it was not the rice meant for mid-day meal scheme. ISKCON has been providing mid-day meals to more than 13,000 students of 67 government schools and another 1,850 students of 61 GVMC schools,” ISKCON (Visakhapatnam) president Samba Das said.

According to him, the GVMC pays a lump-sum amount for procurement of rice and on an average, the government provides about 350 bags, each weighing around 50 kg, of PDS rice for the mid-day meal scheme.

“There is no truth in the allegations made by vigilance officials. They can check our ledger and stock position,” Mr. Samba Das said. “We have around 4,000 life members and they donate rice on a regular basis which we exchange them for better quality stock to run our free meal schemes being run at KGH, Choultry and AIDS and Leprosy homes in Vizianagaram,” he added.