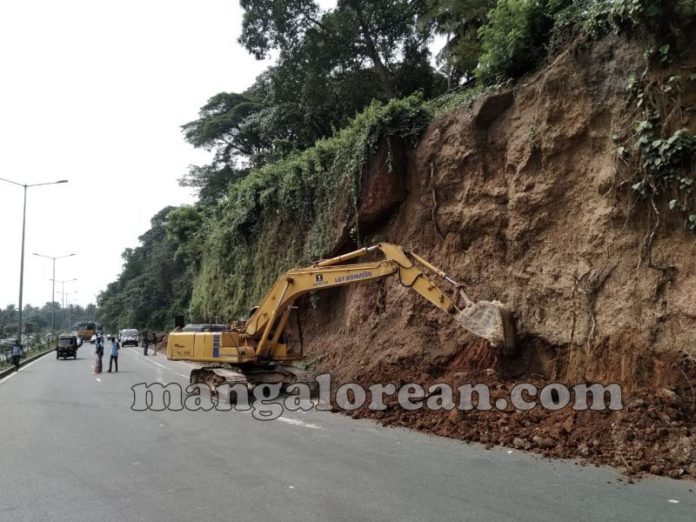 Mangaluru: Team Mangalorean had always kept an eye on this particular spot, when it had noticed leaning trees posing danger to passing motorists and pedestrians on National Highway 66, right before Nanthoor Junction. Even after Team Mangalorean had highlighted about the danger posed by these trees, the concerned officials never took action, and the result was that, one of the huge trees came crashing down on a moving school bus, but luckily no one was injured. (Ref:  Leaning Trees On NH-66 At Nanthoor Pose Danger; School Children Miraculously Saved When Huge Tree Falls On Bus At Nanthur) After that, we had also alerted the officials about the leaning laterite rocks/mud that could come down on traffic or people, any time. But the officials had turned a blind eye towards it, probably waiting for a mishap or disaster to happen, and only then take the necessary action. Bah humbug! 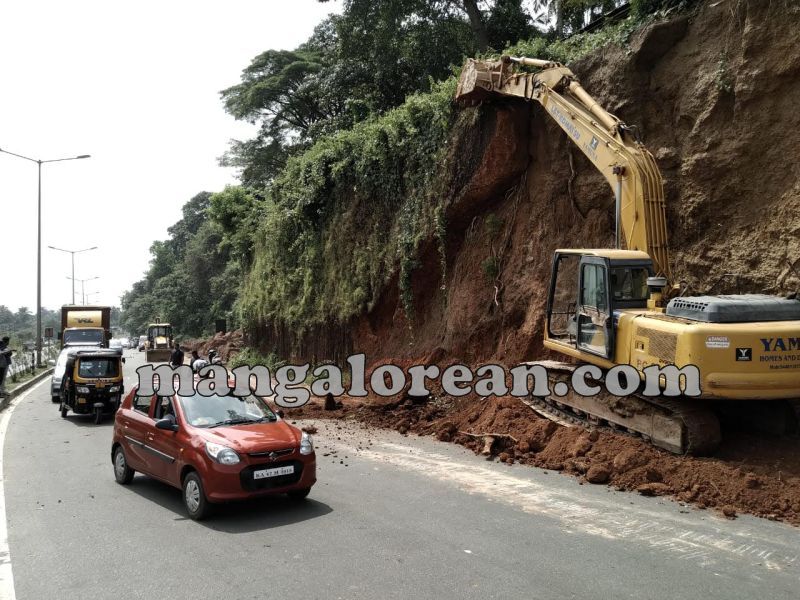 But today Team Mangalorean received a report from these three dedicated, committed and responsible citizens of Mangaluru, led by Arjun Mascarenhas, Jonas, and Vivek Pal, who had taken an initiative in seeing that the hazardous leaning/overhanging laterite rocks/soil be cleared before it comes down crashing on motorists and pedestrians. The report stated- “Three months back after the incident of a huge tree crashing on a school bus happened, none of our elected representatives or concerned officials were least bothered to fix the issue. So we ourselves took the charge, by contacting the NH officials to fix the hazardous incident from happening. ( The images in the report shows today’s work scenario of NH officials and Navayuga constructions based on our observation). 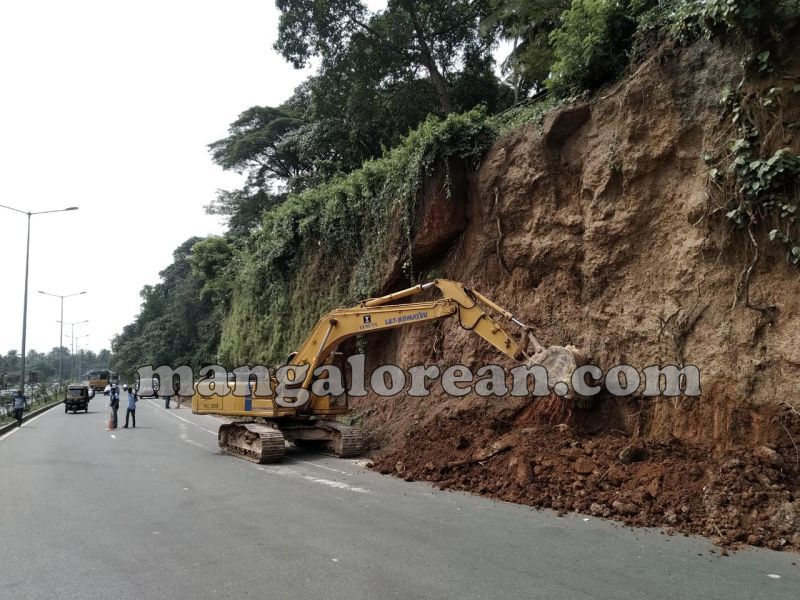 “As we arrived at the Nanthoor spot where the overhanging boulders were to be removed, the first thing we noticed was no traffic cops were around. The next thing we noticed was personnel from or employed by NHAI were working with no safety precautions/gear like helmet, shoes, masks etc. We also noticed that the barricades and personal required to manage traffic on the side where the work was to be done was not as per standards. We then proceeded and enquired with the NHAI personal about the absence of traffic police. After a while, the traffic police arrived probably at the intimation of the NHAI personal there, and we approached the police and the concerned traffic inspector, on the shortcomings we had noticed with regards to the job to be taken up 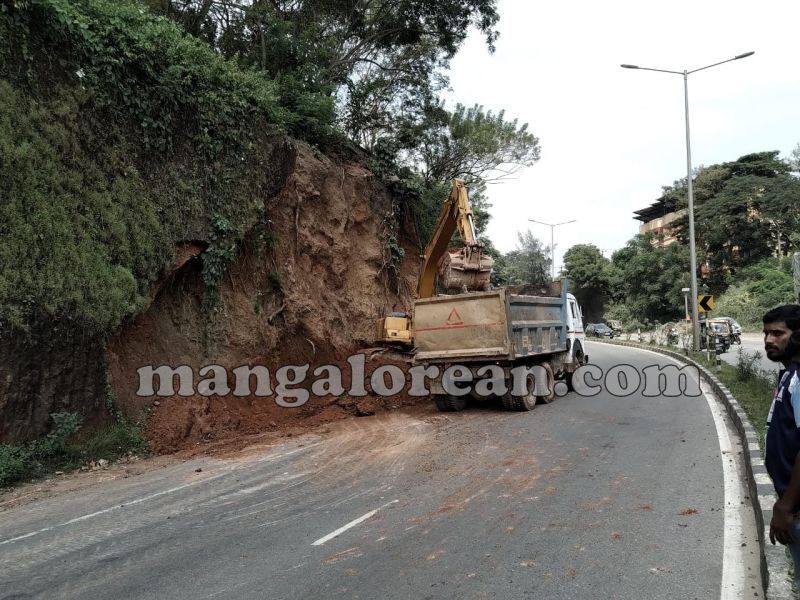 The traffic police left shortly after speaking to us. The work started at around 11 am with barricades placed very wide apart from each other. This led to a lot of vehicles cutting the lane and overtaking vehicles on the left and endangering the lives of the NHAI personal and other vehicles including their own. As the work proceeded the traffic police who were managing traffic in Nanthoor junction kept managing traffic there. Then came the time where the overhanging laterite blocks needed to be taken down. This is where and when things started getting extremely dangerous for everyone in vicinity i.e., the NHAI personal, the JCB operator, the vehicles and its occupants plying on the highway. 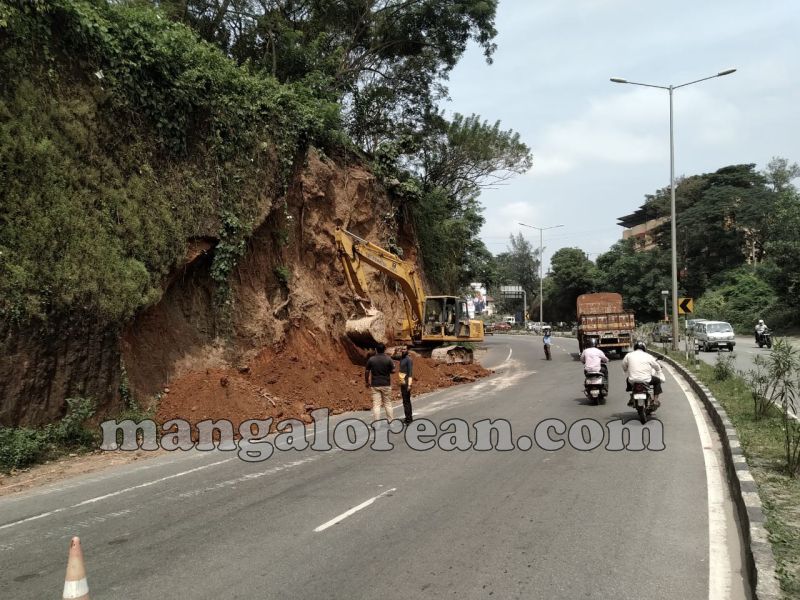 – The NHAI personal had not even made the traffic cops managing traffic in Nanthoor junction aware of this sudden diversion. It goes unsaid that some vehicles missed hitting each other head-on by luck and gods grace. 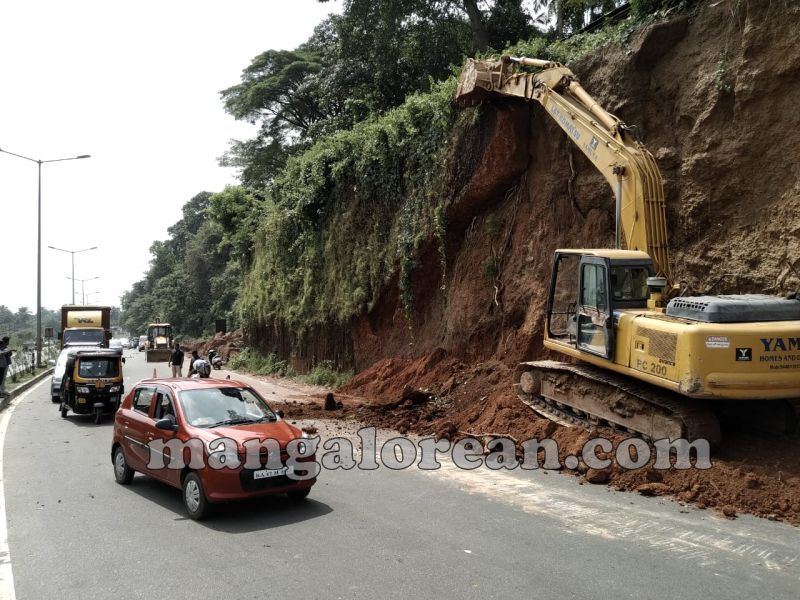 – Such a situation was abruptly evaded after we raised a concern and also a traffic constable managing traffic in Nanthoor junction too rushed to the spot and took to task the NHAI personnel.

– Another risk factor to be pointed out was when the JCB hammering away at the Laterite block and a room-sized chunk of it falling down on the highway from 30-35 feet above and large pumpkin sized chunks flying in all direction as the big laterite block hit the highway asphalt. The chunks could have easily hit either one or many as mentioned above. 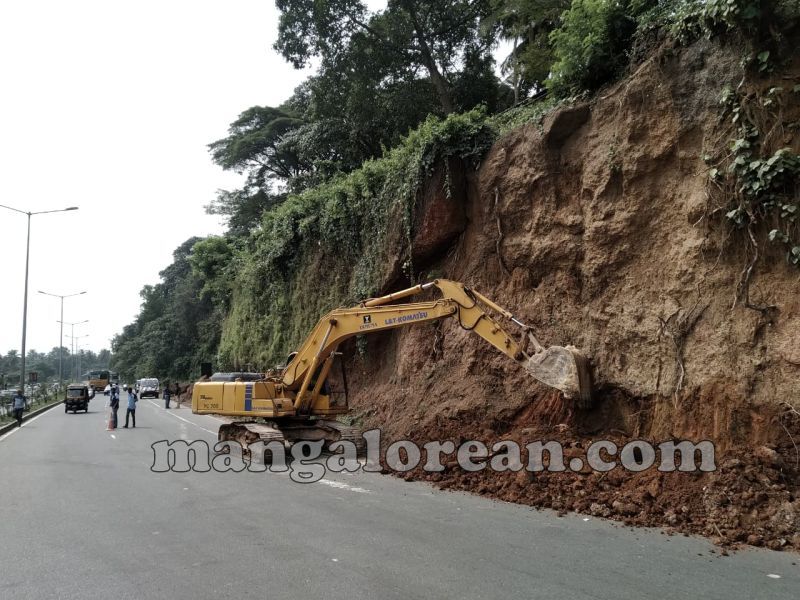 – The other unprofessional and callous approach of the NHAI personnel working there was part of the overhanging laterite block which was hammered away before the work was stopped abruptly. If any rain or a very minor seismic vibration can bring a large block onto any oncoming vehicle or vehicles approaching from Pumpwell side. 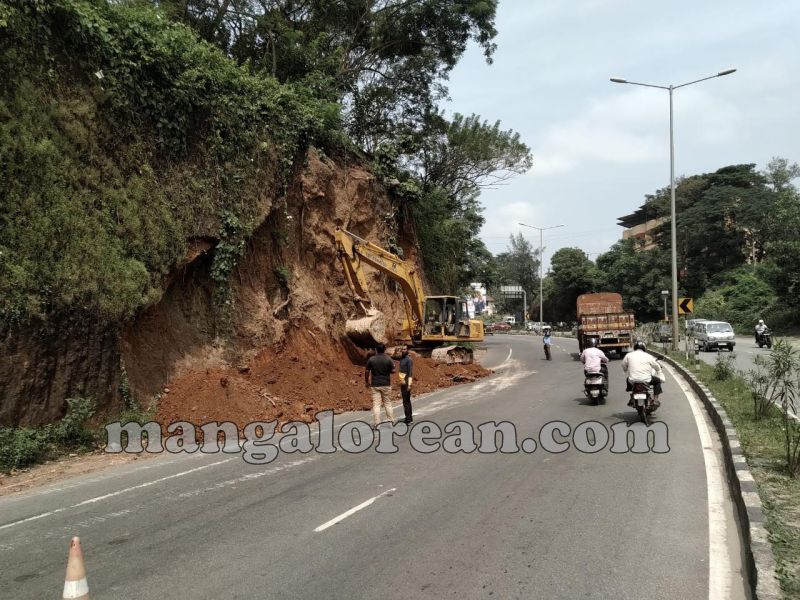 – The last risk factor to mention is the loose gravel left on the highway after the laterite debris was cleared from the road. When we questioned the personnel about the possibility of a two-wheeler or four-wheeler skidding due to high speed, a 30 degree turn and braking at the same time, they did not have any measures or methods to clean this up and expect elements like heavy traffic or rain or wind to clear the debris rather than do it themselves using water jets or blowpipes. 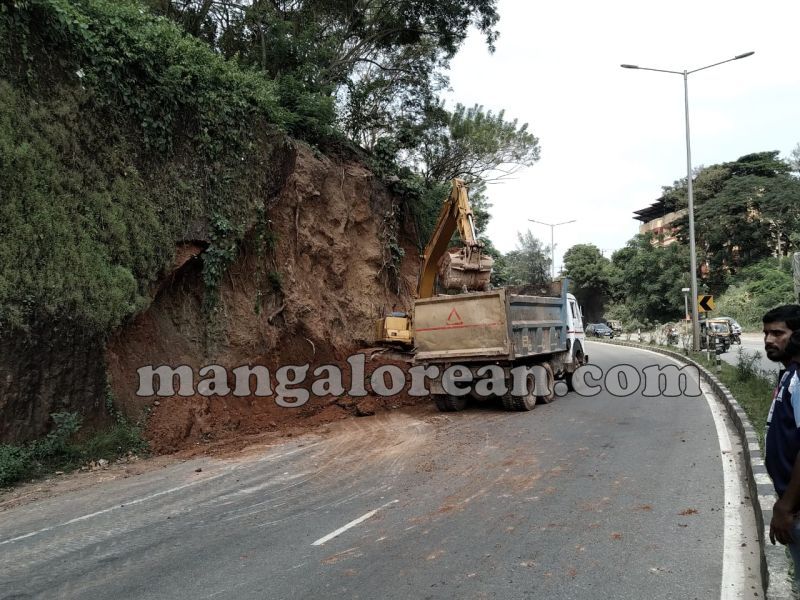 – Work stopped around 12.45 pm as traffic police objected because there was a clear lack of coordination between NH authorities and traffic police. But, we will not stop here, instead will follow up again until the issue is sorted and rectified fully”…