Mangaluru: From a Aloysian of 1983 “Yours Truly” to a Aloysian of 2010, “Jaison Sequeira”, my sincere congratulations to him for emerging as a young and talented Konkani Rock Star of Kodiyal aka Mangaluru, and Mangalorean.com feels proud to be the Media Partner of His Fourth Gig “CHOVTO SUR” which was staged at Eric Mathias Hall, St Aloysius College-Mangaluru. Among all the Konkani music concerts that I had witnessed so far, ‘Chovto Sur’ impressed me a lot for the unique style and performance of Jaison and his musicians, backed up by 22 young budding singers. Wow- Truly an amazing and mesmerizing concert it was, which will be remembered by Jaison’s fans for a long time.

Jaison’s music is Good Music of the present generation, and therefore the crowd at the Concert was predominately youngsters, amidst a bevy of middle-age and seniors! But everyone did enjoy and loved Jaison’s music because there was something about his voice. His voice, his style, his passion and his presence left the audience thirsty for more. His fan following extends right from us commoners (happily guarding our spots in the first rows) to celebrities, tapping their feet and raising their applauds. His concert comprising of 12 songs, and a couple of dances was truly a treat for the Konkani music buffs who had assembled at the Hall. And for the fact, many talents are born here in Mangaluru, from singers to actors to dancers etc. The percentage of youngsters is very high here in this Coastal and also having many young singers who are making their families and friends proud. Music is one entity which connects people all across the globe. Music has the ability which makes people forget the language and make us concentrate only on the melody. Among many cities in India, Mangaluru is one place where so many songs are composed throughout the year by upcoming and budding young singers. If ardent music aficionados and experts are to be believed, in the last decade or so, music and it’s many intricacies have almost transformed into a kaleidoscope of interesting genres, voices, rhythm and tunes, complete with experimental beats and fused instruments. Some of the most talented new musicians on the scene give us their two bits on the changing scenario. And one among them is Jaison J Sequeira, a 27-year-old singer-songwriter hailing from Gurupura, Mangaluru, who started composing songs in his early teens when his parents bought him a keyboard and a guitar. And now after few songwriting spree and concerts, Jaison Sequeira was back with his fourth music concert “Ch’ovto Sur”. He is among the very few Konkani composers presenting new songs in every live show, and he proved it during ‘Ch’ovto Sur’, where music lovers listened to his youthful compositions rendered by himself and MTG winner Ms Velita Lobo. This event was in association with Konkani Sangha of St Aloysius College and joined by 22 students from this association as a part of the harmony lead by Denzil Pereira of the Blue Angels Choir. Jaison’s band comprised of renowned drummer and percussionist Sachin Sequeira, the eldest among the rest of the gang, with Russel Rodrigues on Electric/bass and acoustic guitar, Derick D’Souza on rhythm guitar, Alron Rodrigues on the keyboard, and Sharwin Fernandes on the lead guitar. An added attraction to the band was multi-instrumentalist Reuben Machado from Mangaluru, who has a bunch of his music/instrumental renditions on YouTube- this guy can play the flute, harmonica, saxophone and what not. No doubt Reuben did give a magical touch of his unique musical talents to the concert. Bravo! The principal of St Aloysius College, Fr Praveen Martis SJ being invited as chief guest appreciating the efforts of Jaison Sequeira said, “By launching his fourth concert “Chovto Sur “, Jaison and his group have become the close encounters of the music kind to the Konkani music lovers of Mamgaluru. Jaison’s music full of energy with suits the present generation has rendered a good platform for the new talents and something totally unique for the audience. We at St Aloysius College encourage and support young and aspiring talents, and when they come to us for a space to unleash their talents, we are ready to provide them a stage free of cost, as we did here for Jaison’s concert. Wishing Jaison and his young team of musicians all success in their music career, and looking forward to many more music concerts in the future” After the end of the concert, a few from the audience gave their reviews and thoughts about Jaison and his concert, and among them was Eric Ozario-the Gurkar of Mandd Sobhann who said, “If someone asks me, who will be my successor, I would definitely say Jaison, who is now a Young Konkani Rock Star, unleashing his young and vibrant music talents. This is just a beginning for him, and I am confident he will reach greater heights in the world of Konkani music, and with young musicians like him and his team, Konkani music can make a difference, making it more traditional and richer. A job well done by Jaison, Velita and the rest of the team”

Jaison also announced His dream venture ‘Paypassion’, an online portal for all the young and old talents of our region, who can download and listen to his music. Truly, the Sur Series by Jaison Sequeira and his team is known for uninfluenced music presentation. Paving a new path for original music in Konkani Jaison said, “Music in Konkani language is no different from any other music forms of the world in aspects structure and impact. My dream is to present my songs in their best form without having to compromise on anything. And that is possible through crowdfunding. This has been the driving force of Sur series so far. So I urge everyone out there to contribute and help me realize the potential of this art”. All in all ‘Ch’ovto Sur’ is going to be a feast of original music for genuine music lovers. Ch’ovto Sur did create a benchmark in Konkani music. A 27-year-old singer-songwriter hailing from Gurupura, Mangaluru, started composing songs in his early teens. Having done his schooling at St Joseph’s HS -Bajpe; PUC at St Aloysius PU College-Mangaluru, Degree at Alva’s College, and completing his MSc in Mangalore University, Jaison was employed at Eurofins Advinus Ltd., Bengaluru as a research scientist. At present he is a Research Fellow at Konkani Adhyayana Peeta, Mangalore University working on a DNA based study of Konkani speaking population. 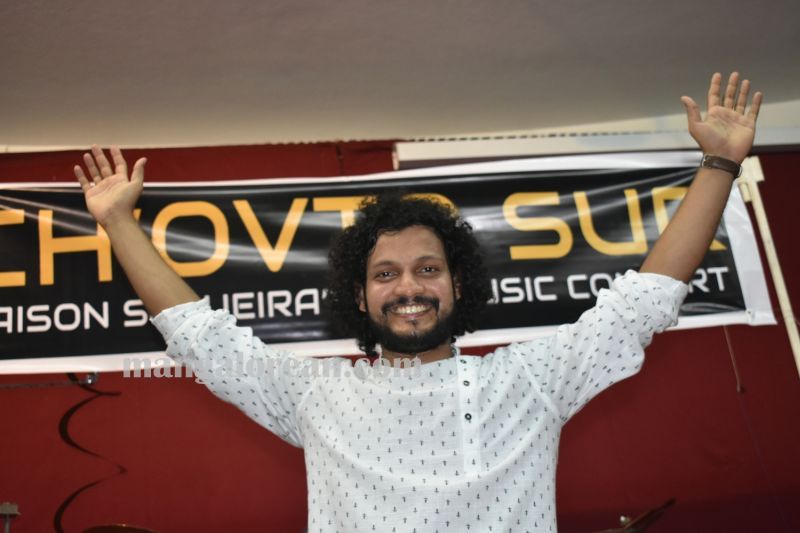 Jaison has composed close to a hundred songs in different languages including Konkani, Kannada, Tulu, Hindi and English. He has written close to 100 poems that have been published in regional magazines and websites and recited on All India Radio and many literary fests; His songs ‘Oh Chitteye’ and ‘Mera Desh’ are streamed on all online music streaming sites. ‘Oh Chitteye’ was nominated in three categories at the Kannada International Music Academy (KiMA) awards 2019. He was nominated for ‘Best Indie Artist’ category; He was awarded ‘NBJ Kala Puraskar 2018’ for his contribution to Konkani Music; He has received ‘ICYM Award of Excellence 2019’ for music from Dr Peter Paul Saldanha, Bishop of Mangalore diocese; He is a resource person at various summer camps teaching the nuances of music and presentation.

Excellent Jason n team…wish you all the best.