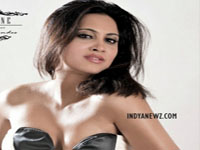 Model and actress Arshi Khan who hails from Bhopal recently gave a Bhojpuri producer a taste of her “bad side”. According to a report by news portal IndyaNewz.com, Arshi Khan was attending a film party at the M. B. Club at Lucknow, where she was one of the special invitees or guests.

“A producer by the name of Harish Pratap Singh approached me at the start of the function and said he would like to speak to me in private regarding a film offer. I told him that as a special guest at the event, I was busy and this was not the right time to discuss the film. I asked him to contact my manager and gave him my manager’s phone number. However, Harish Pratap Singh, kept following me during the entire event and tried to make small talk every time he bumped into me. He was really irritating during the entire event, but I kept my cool. Suddenly, when the event came to a close, I felt someone nudging me from behind and trying to touch my backside. I turned and saw Harish Pratap Singh right behind me and this is when I lost my cool and slapped him. He was trying to touch my butt. He did it twice. The first time, I ignored him thinking it was due to the rush and the crowd. But when I noticed him right behind me the second time, I could not control my anger and slapped him hard on the face,” Arshi Khan told IndyaNewz.com.

Harish Pratap Singh who is a small time Bhojpuri producer from Indore, tried to make a joke out of the matter. “Aisa kuch nahi hua,” he said, when IndyaNewz.com asked him if he was slapped by the actress.

Arshi Khan was born in Afghanistan but came to India when she was just four years old as her parents migrated back in India to Bhopal. She finished her school and college in Bhopal itself and was attracted towards theatre since her early childhood. Acting brought her to Mumbai where she bagged many assignments in a short span of six months. She was introduced to the famous stage personality Janaab Ehsaan Chishti, a famous theatre director in Bhopal. “Ehsaan ji thought that I have a attractive face and figure and if I try and work hard, I can possibly make it as an actor. He used to instigate me and it was at Ehsaan ji’s provocation that I started acting in various dramas in Bhopal city. I started getting offers for modelling and that’s how I got assignments,” Arshi Khan told IndyaNewz.com. Taking a cue from him, she got a break in a Tamil film ‘Malli Mishtu’ where she played the lead role opposite Tamil star Naresh and has not looked back since then.