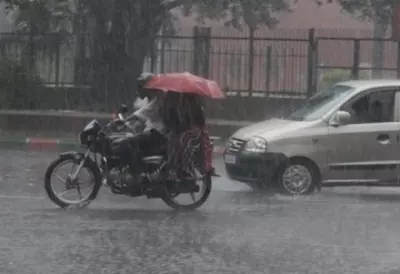 Agra: Though the weather office and the Skymet service had forecast abundant rains from July 24 to 26 in Agra region, the clouds have been playing hide and seek, raising fears of an imminent water crisis.

Though July has had a couple of good showers in the early part, the overall rain pattern in the whole of Braj Mandal comprising districts of Agra, Mathura, Firozabad, Etah, Mainpuri and Hathras, has been uneven and deficient.

“First the monsoon was delayed by a good ten days. When it rained in early July, it was in patches. On several occasions, one part of the city received rain, while the other went dry. The sky is overcast no doubt, but for precipitation to take place, the ground temperature should fall to a critical minimum level. This is not happening as emissions by automobiles, denudation of green cover and cement structures all around, have prevented fall in temperature,” environmentalist Shravan Kumar Singh said.

Ravi Singh, a farmer of Barauli Ahir block said, a few showers initially helped sowing for the Kharif season, but the ponds are still dry, the smaller streams have no water. “One hopes the weather gods smile on Agra soon.”

Against the annual average of 650 to 700 mm, Agra has barely received around 250 mm rain so far. The Yamuna river which should have been in spate, is still dry and heavily polluted with toxins.

Devashish Bhattacharya, the environmentalist, said “this is the right time to clean up the river Yamuna which needs massive desilting and dredging so that the underground aquafers are dechoked and water seeps in to raise the water table of the city. So many promises have been made by politicians over the last several years about rejuvenating rivers, but unfortunately, the results are not visible on the ground.”