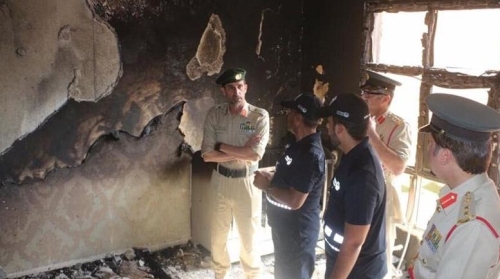 Baby dies after fire breaks out in her room in Dubai

Dubai: An 8-month-old baby died in a tragic house fire in Dubai on Sunday, according to a statement issued by Dubai Police on Monday.

Major General Abdullah Khalifa Al Marri, Commander-in-Chief of Dubai Police, visited the family of Humaid Al Kharousi, whose house was gutted in a fire incident on Sunday in Al Barsha area. The fire, unfortunately, claimed the life of an 8-month-old baby girl.

The police chief expressed his sincere condolences to the family.

The Commander-in-Chief inspected the site of the fire and was briefed by experts about the fire from the General Directorate of Criminal Evidence and Criminology at the scene.

Col. Majid Sultan Al Suwaidi, Acting Director of Al Barsha Police Station, said that the Command and Control Center in the General Directorate of Operations received a report of the fire on Sunday at 12.00pm

The fire erupted in a house in Al Barsha 3 area.

The fire broke out in the room where the girl was sleeping, leading to her death.