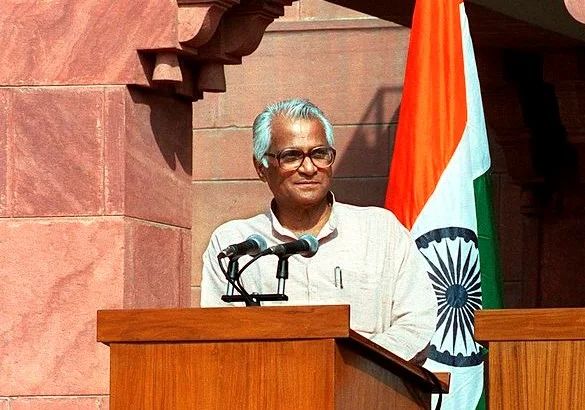 St Francis Xavier Church-Bejai, Mangaluru to Erect a Tomb in Memory of George Fernandes – the Padma Bhushan Awardee, Karnataka’s Valiant Son and an Able Politician, and also a origin of Bejai, Mangaluru.

Mangaluru: Addrssing the media persons during a press meet held at Mangaluru Press Club, Fr Wilson Vitus D’souza, Parish Priest, St Francis Xavier Church, Bejai said, ” A hero is an ordinary man, who does extraordinary things. He faces headlong, all hurdles and challenges that come his way, and finally emerges as a leader.”- These words truly reflect the eventful life of the late George Fernandes, who was born in Bejai, as the eldest of six siblings, to John Jos Fernandes and Alice Martha Fernandes. He completed his primary education in St Francis Xavier School, Bejai and his High School in St Aloysius High School, Mangaluru”.

Fr D’souza further said, “In his 16th year, in 1946, he was drawn to religious life and hence, joined St Peter’s Seminary in Bangalore. However two years later, he changed his mind and traversed in a different direction towards a new lease of life. He faced a lot of hardship during this period of his life when he was on the hunt for a job, in Maharashtra. There were also days when he had to spend his nights in bus stops and Railway stations. He took up odd jobs, every little errand that came his way and did them all earnestly to make ends meet. His first good break came from the field of journalism, where people recognized him as a talented journalist. Cultivating great interest in literature, he shone as a socialistic thinker” .

“There is a saying in Kannada which says, “One can make out how strong the tree is even as the seed is just sprouting”. Even as a child, George Fernandes was very disciplined, had great love for the poor and the downtrodden and exhibited leadership abilities. Imbibing strong Christian values, He is the only Christian leader who strove to build a magnificent India. During the period of emergency, even from within the prison, this brave warrior from Karnataka, contested the elections in the state of Bihar and won a decisive victory. Although he had to go to jail several times, he never tired of fighting selflessly for the poor. Having tremendous love for the labourers, he strove for their rights incessantly” added Fr Wilson D’souza.

” George Fernandes was one of the great leaders that India has been blessed with. Having unshakeable faith in and tremendous respect for Democracy, this great man worked tirelessly for its progress and wellbeing. He was elected nine times as the member of Lok Sabha and once as a member of Rajya Sabha. The credit of establishing the “Bombay Labour Co-operative Bank” in Maharashtra also goes to this dedicated personality” added Fr Crasta..

Francis Ashok Pinto, Vice President, Parish Pastoral Parishad said, ” Having a chain of achievements in his wake, the then Prime Minister of India, Late Morarji Desai appointed him as the minister for Medium and Communications, and later on as the Minister for Industries. He was the first son of South Kanara to become the Railway Minister under the leadership of the late Prime Minister Vishwanath Pratap Singh. Through his courage, hardwork and humility, he brought the Konkan Railway Plan to fruition. During the tenure of the late Prime Minister Atal Bihari Vajpayee, having been chosen as the Defense minister, this brave leader inspired our soldiers to fight valiantly in the dangerous region of Siachin and defend our country”. .

“Despite having such impressive portfolios and such prominent political roles, he was a very simple man. He always wore a khadi kurta and pyjama, leather sandals on his feet and simple thick spectacles. People thronged in multitudes to hear him speak. He was also a multilingual personality. During his ministerial tenure and his stay in Delhi, the doors of his residence were always open to the public. He never had any kind of security or servants. He would perform all his personal work by himself. In this way, he was also known as the only simple politician who strove tirelessly for his country. In the eve of his life, Fernandes fell a victim to the Alzheimer’s syndrome. His loving wife, Mrs Laila Kabira took care of him. After a long period of ill health, at the age of 88, he finally breathed his last on 29th January, 2019 ” added Francis Pinto. .

Lavet Vincent D’souza, Member, Parish Pastoral Parishad speaking at the press meet said, “Recognizing this great man’s service to the poor and the downtrodden, as a leader of the labourers, a social worker, journalist and as a seasoned politician, the Government of India has conferred the Padma Bhushan Award on him on the 26th of January, 2020, and made this popular and well loved leader’s name immortal. In the wake of this historical event, a tomb has been erected in the birthplace of Mr George Fernandes, under the initiative of the Bejai Church with an attempt to commemorate the great achievements of this great leader”.

“Never having earned anything for himself or saved anything for himself, he spent his life in the service of his country and his countrymen. Having deep affection for his birthplace, he was also an admirer and a generous donor to his alma mater, St Francis Xavier Higher Primary School, St Aloysius College and to Fr Muller’s hospital. Being married to Laila Kabira and being a father to his only son, Sushanth, he was also an exemplary family man. Although Mr George Fernandes is no longer in our midst, during this occasion where an attempt is being made to immortalize his memory in the minds and hearts of all, by erecting a memorial on his mortal remains, according to his religious customs, let us pray that the Lord almighty may grant him eternal rest and that his soul may rest in peace” added Lavet D’souza. 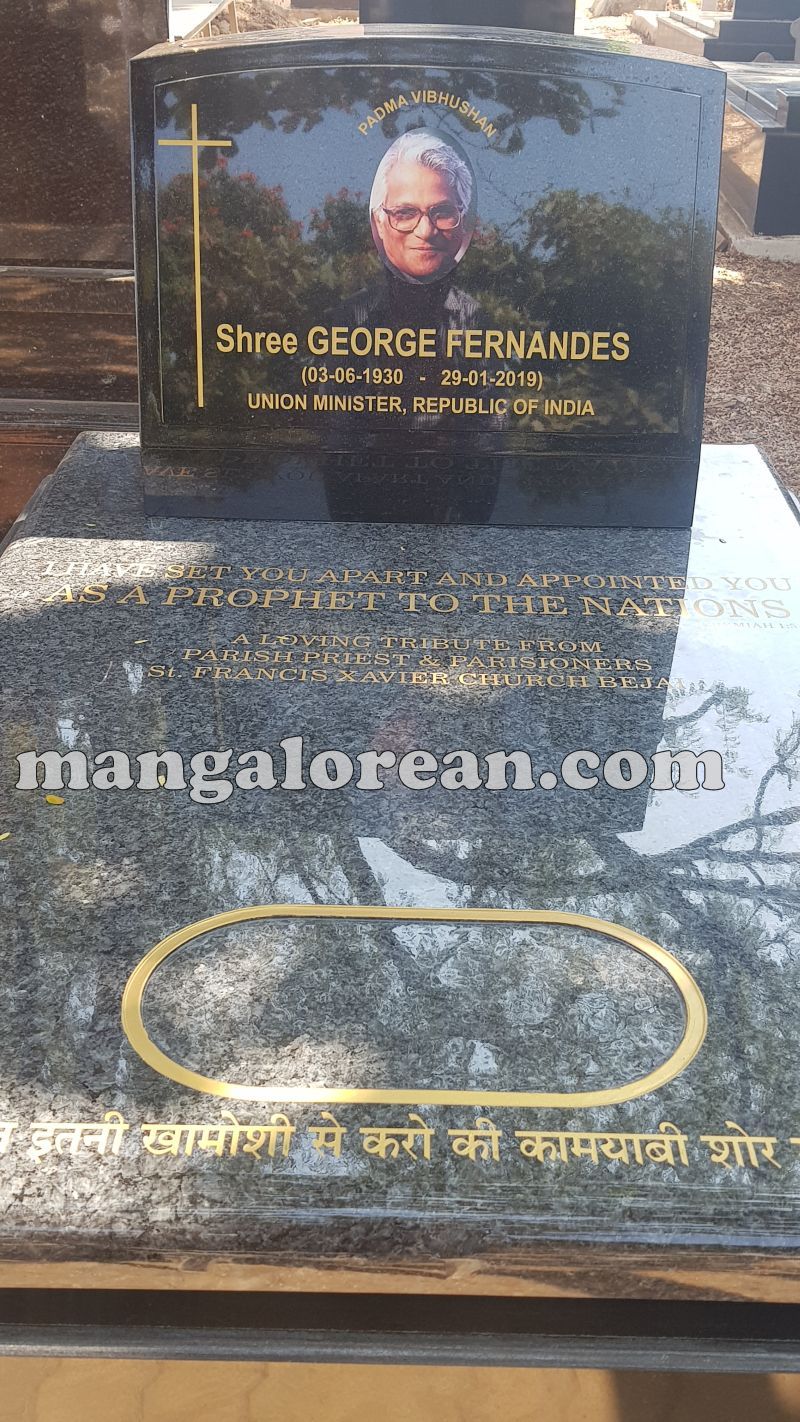 Please put his name and achievements in his mother tongue Tulu/Konkani and state language Kannada rather than blindly using just English and Hindi.