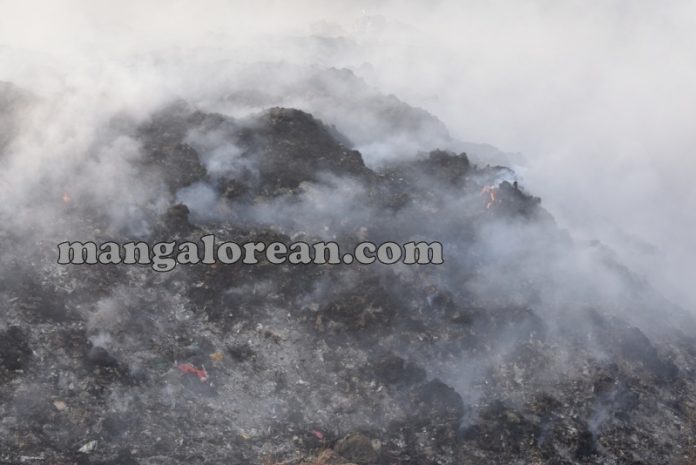 Billowing Smoke & Foul Smell from Pachhanady Landfill Haunt Residents for FOURTH Day? Work is going on to stop the smoke by covering it with mud. But for the kind information of MCC Health Officer Dr Manjaiah Shetty, Team Mangalorean observed that the workers employed to clear the waste are not wearing proper safety gear- even the drivers of the earth movers don’t wear masks or other safety gear- one ground worker was seen only with safety boots, but no face mask, and he was sorting out the waste with bare hands. Is this how a Health Officer looks into the health safety of their employees?

Mangaluru : The garbage fire that started on Monday at the Pacchanady Landfill is not completely cleared off, even though the fire personnel were able to douse the fire in the first two days, but there are still signs of small fires here and there among the piles of waste- but the main problem haunting the nearby residents up to 5-6 kms is the pollution of the billowing smoke and foul smell from the burnt garbage. Yours Truly of Team Mangalorean was present at the scene on Thursday morning, and this report reveals the present condition of the Landfill, along with eye-catching pictures. The areas most affected by the fire are Pacchanady, Bondel, Mangalanagar, Padavinangady, Kudupu, Kavoor, Baithurli, Neermarga, Pilikula, Kelarai, Shaktinagar, Vamanjoor and adjoining places. Even high-rise apartments are facing the brunt of the polluted smoke. 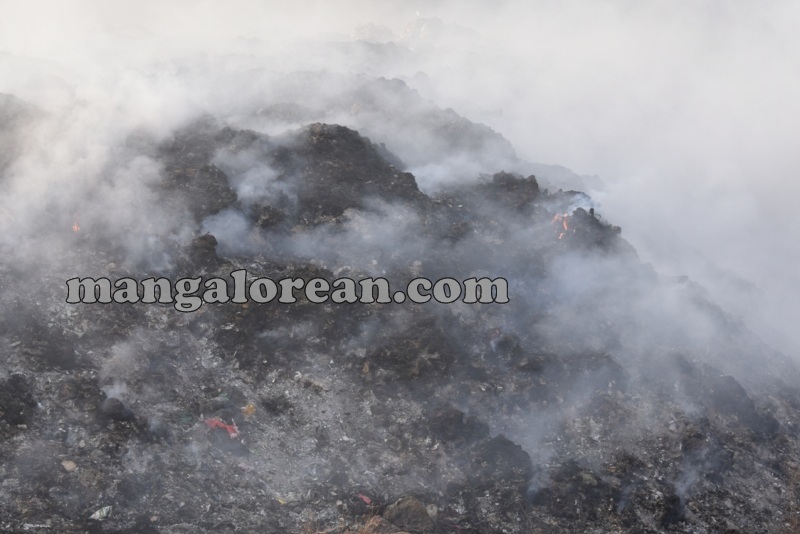 As a result of pollution from this landfill, residents have been forced to breathe some of it in, and some of them also complained of health issues such as headache, nausea, burning of eyes and sneezing. The smoke is also causing poor visibility in the area. Even though the officials of Mangaluru City Corporation say that it is common during summer time that fire erupts due to the accumulation of Methane created from the waste. But citizens of Mangaluru and residents near to Pacchanady say that it is man-made fire, just to ease out the burden of work to clear the waste. According to sources, some fires at Pacchanady landfill are not accidental but pre-meditated. Setting fire to a large amount of waste eases the work of the Mangaluru City Corporation officials, as the waste is reduced to ash. With this more space is created in the landfill for garbage to be dumped in. According to the norms, once garbage fills up in the area, it is covered with mud. 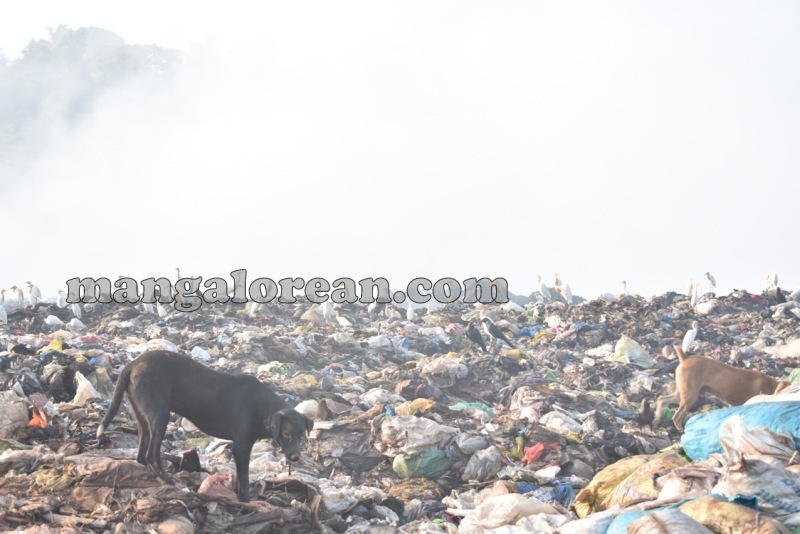 A MCC official speaking to a reporter had said, “A strong reason why the fire happened is that this summer the monsoons were delayed, and did not arrive by the first week of May. As there is no rain, due to extreme heat, it has resulted in fire. We are trying to control it from past few days. The fire is under control but thick smoke is getting emitted from the dumping yard. We are trying our best to cover the waste with mud using earth movers, and the smoke could be stopped by Friday, if everything goes on well”. In the meantime, Deputy Commissioner and present Administrator of MCC Sasikanth Senthil speaking to media had said, “Fires at landfills are a common phenomenon, and it happens due to the accumulation of methane. It is not because of miscreants setting fire to garbage. We are trying to capture the methane by digging wells in and around the landfill, so that its density is reduced”. 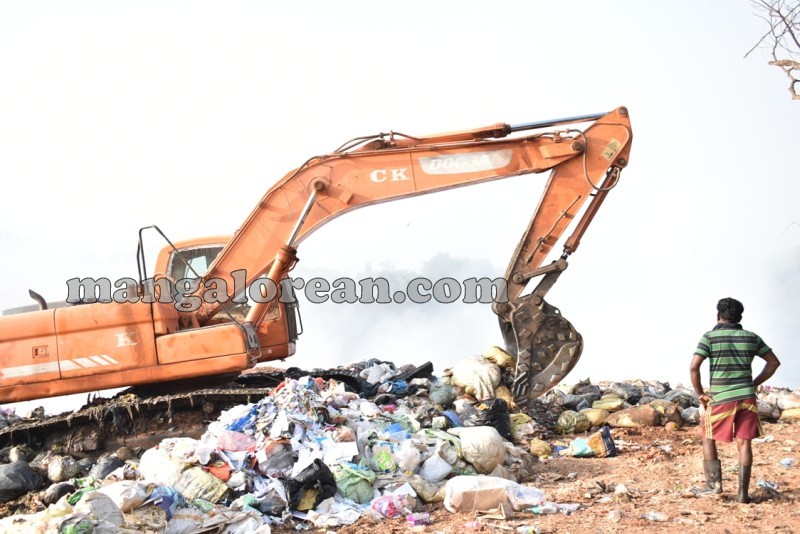 Work is going on to stop the smoke by covering it with mud. Loads of mud have already been kept ready for the purpose. But for the kind information of MCC Health Officer Dr Manjaiah Shetty, Team Mangalorean observed that the workers employed to clear the waste are not wearing proper safety gear- even the drivers of the earth movers don’t wear masks or other safety gear- one ground worker was seen only with safety boots, but no face mask, and he was sorting out the waste with bare hands. Is this how a Health Officer looks into the health safety of their employees? Even the security guard assigned at the landfill is not wearing any safety gears. Yours Truly was there for about 15 minutes, and I couldn’t stand the smell and pollution of this area- just imagine these workers being there for hours and days, without proper safety gear, which may surely lead to health complications. Awake, MCC officials, and take care of these slogging workers in that harsh condition without safety gear. 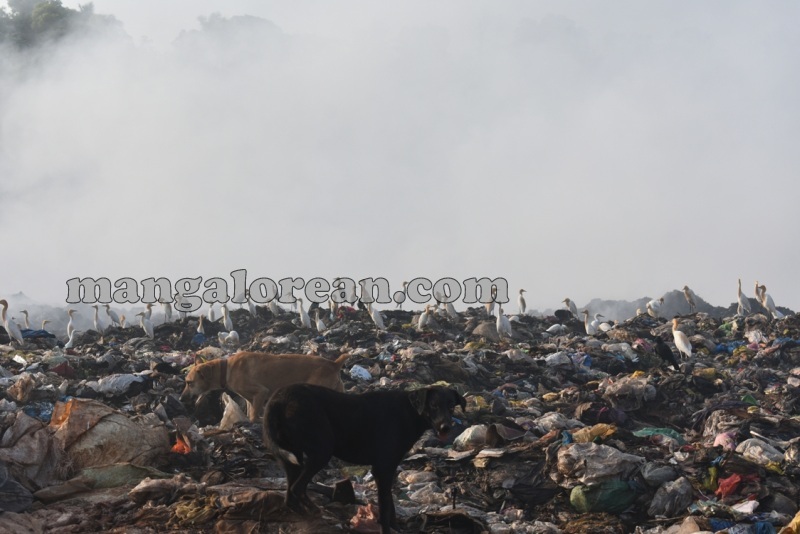 It is learnt that after visiting the Pacchanady landfill Mangaluru North MLA Dr Bharath Shetty had assured that he will ask officials to install CCTV cameras, high-mast lamps, and also increase security in and around the landfill. Hope his assurances will materialize, just like other politicians in the past had assured such things but until now nothing is seen. Narayan Shetty, a resident living close to this landfill speaking to Team Mangalorean said, “On some days it is so hard to be outside due to the smell from the landfill, I spend my entire day watching TV. Frequent requests made by many residents concerned about their health to the MCC officials to move the landfill where there is no human population, has gone in the wind. And now since three days, we are inhaling polluted air from the Pachhnady landfill. Will the administration pay for our health care in case we get sick?” 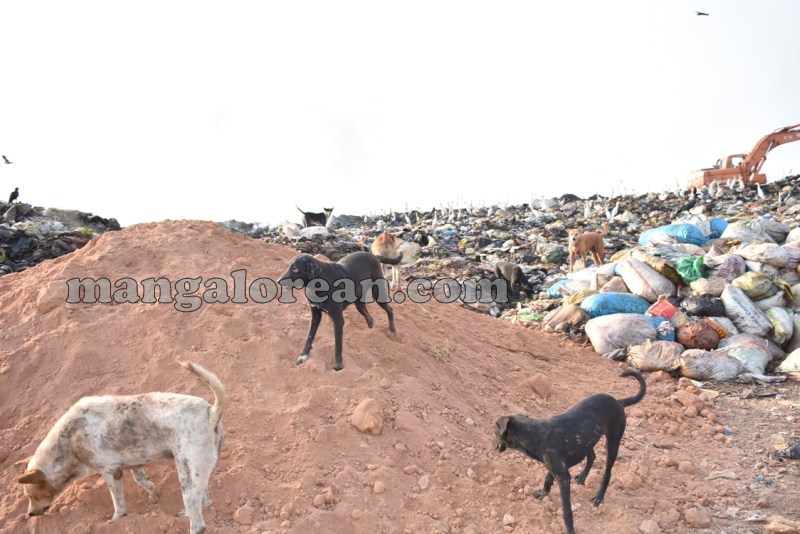 A student of a nearby Engineering college in Vamanjoor said, “On a given day, the foul smell from this landfill is so strong, most of stay inside the building even during our break hours. It’s sad to note that the concerned persons are not looking at the health safety of the citizens, which is ridiculous. Many a times during our class hours when the windows are open we could get the bad smell, and makes us hard to concentrate on studies. Hope someone will rectify this problem at the earliest.