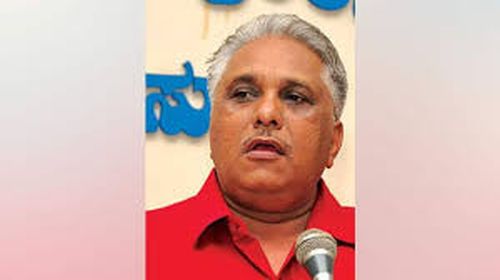 Bengaluru: The Bharatiya Janta Party (BJP) government in Karnataka is as solid as rock and there is not rebellion, said a spokesperson on Tuesday.

“There is nothing to make the government unstable. We have got our own strength. Nothing such as a rebellion. They are all our guys, they are all party members. They can’t think of even displacing the government,” told party spokesperson G. Madhusudhana to IANS.

However, he said he has no knowledge about the reported 22 MLAs’ meeting ay Medium-scale Industries Minister Jagdish Shettar’s home on Monday night.

He said there is no alternative to BJP in the state as well as Centre.

Meanwhile, Medical Education Minister K. Sudhakar said this could be the handiwork of opposition parties.

“Probably this is the handiwork of our opposition. They are resorting to all sorts of cheap political tricks. I think this will not work. The BJP government in Karnataka is very stable,” Sudhakar said.

Madhusudhana said the opposition itself is in chaos and not in a position to topple the government.

According to the spokesperson, mere wishes by the oppostion will not topple the government.

“JD (S) is a loosely held organization today. And everybody is in fact disillusioned with the leadership. They are going away from Kumaraswamy and H.D. Devegowda,” observed Madhusudhana.

He said the BJP is not bothered about losing the Delhi elections. “The Centre is going very strong. We are going ahead with the Uniform Civil Code and population control bill is also introduced. Everything is positive so far as BJP is concerned,” he said.

Sudhakar said all the BJP leaders in Karnataka have the highest trust and faith on Chief Minister B.S. Yediyurappa.

However, replying to a query on a senior party leader being discontent for not getting a ministry, he said there should be some sacrifices coming in. “I think the party high command will handle this situation. BJP government has opened the gateway for the party in South India,” he said.

Madhusudhana said aspirations are natural and some might be making efforts and meeting central leaders for positions.