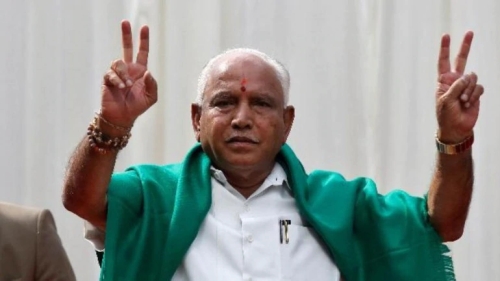 Bengaluru: An upbeat Bharatiya Janata Party (BJP) on Friday staked claim to form the new government in Karnataka and urged state Governor Vajubhai Vala to swear-in its leader B.S. Yeddyurappa as the Chief Minister later in the day, a party official said.

“Our party’s national President Amit Shah has asked Yeddyurappa over the phone from Delhi to stake claim for forming the next government and take oath as chief minister at the earliest,” BJP’s spokesman G. Madhusudan told IANS.

The BJP’s decision to stake claim to form a government for the fourth time in the southern state comes a day after Assembly Speaker K.R. Ramesh Kumar disqualified three Congress legislators for defying their party’s whip and three days after the shaky JD-S-Congress coalition government collapsed on July 23.