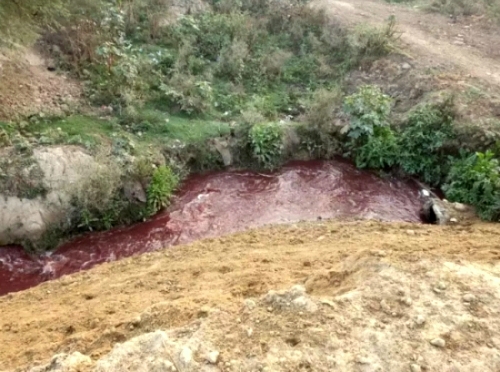 Blood flows through Varuna into Ganga in Varanasi

Varanasi: Blood of illegally slaughtered animals is now flowing into the Varuna River in Varanasi, giving it a crimson colour at some places.

This has been confirmed by a panel of the National Green Tribunal (NGT).

The NGT-constituted Eastern UP Rivers and Water Reservoirs Monitoring Committee (EWP-RWRMC) had taken note of the ‘red water’ during an inspection in January this year.

In its report on the pollution of the city’s Varuna and Assi rivers, submitted to the NGT on Wednesday, the EUP-RWRMC observed that the major and minor drains from Ardali Bazar carry “slaughter-house untreated effluent” and domestic sewage into the Varuna, and eventually into the Ganga.

The EUP-RWRMC, chaired by retired Justice D.P. Singh, has recommended to the NGT to impose an environmental penalty of more than Rs 27 lakh on the Varanasi Municipal Corporation (VMC) for non-compliance of Solid Waste Management Rules, 2016.

Reports by various scientists have also confirmed that the Varuna’s water quality is “poor” and oxygen levels of the river downstream are “below detectable limits”.

The Central Pollution Control Board (CPCB) has identified the Varuna’s stretch from Rameshwar Ghat to Adikeshwar Ghat as polluted.

The panel’s secretary, Rajendra Singh, said: “During monitoring, it was observed that dissolved oxygen in upstream of Shastri Ghat was found 2.5 mg/L before mixing of drains. In downstream, where the drains from Ardali Bazaar mix with the river, the dissolved oxygen was found below detectable limits.”

“This shows the impact of untreated effluent from slaughters mixing with the river, along with untreated domestic sewage. With zero percent oxygen, it has made the water of river Varuna hazardous to public life,” he added.

The panel has also recommended that Varanasi administration and VMC must stop the flow of animal carcasses, blood and flesh from unauthorized colonies on the banks of the two rivers within two months.

The NGT-panel has blamed the state government, the Uttar Pradesh Pollution Central Board, CPCB, VMC, district authorities and the Jal Nigam for pollution in the river.

It has asked the government and district authorities to issue an advisory to people to not bathe in the Varuna and Assi as they are polluted.

The panel has asked CPCB to inspect the two rivers in November this year. The water of the two rivers has been found to be unfit for drinking, outdoor bathing, fish culture and can only be used for irrigation, industrial cooling or controlled waste disposal, the committee has said.