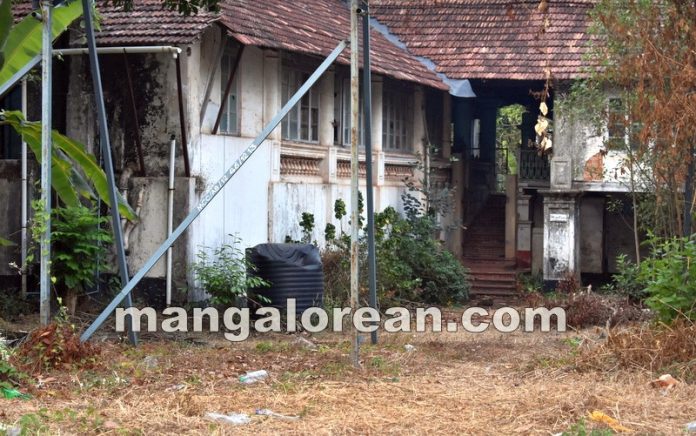 Mangaluru: One of the historic and heritage landmark “Chateau De Lou”, (Lobo Prabhu Mansion), a residence where Late J M Lobo Prabhu and his wife Late Dr Louella Lobo Prabhu lived for years, before both of them passed away, a mysteriously gutted in a fire that broke out during the late Saturday night hours. The tiled Mansion located very adjacent to City Centre Mall, and behind Lobo Prabhu Apartments on Light House Hill Road aka St Aloysius College Road by many, was said to be over eighty years old, with an area of about 3000 sq ft.

Four fire tenders had quickly rushed to the spot and brought the blaze under control. While a major portion of the mansion is gutted, which housed many artifacts, memorabilia and personal items belonging to the Lobo family. The cause of the fire is yet to be ascertained. Except for damage to property, no causalities were reported since no one lived there. During my college days at St Aloysius College, Mangaluru, I remember walking past this house every single day after college, and it boasted a unique circular balcony,(one of its kind in Mangaluru then), and no one could miss having look at this unique house, while walking down or up the Light House Hill Road.

But sadly, it looks like after the death of the elderly Lobo Couple, and after their only daughter Ms Giselle married entrepreneur and builder D B Mehta (current president of CREDAI, Mangaluru), who chose not to reside in the antique house, it was neglected and unattended, later surrounded by high rise buildings and a mega-mall, the City Centre Mall. It is learnt that after the death of Ms Louella Lobo Prabhu, her daughter Ms Giselle Mehta named the Lobo Prabhu Mansion as ‘Chateau De Lou’ in her memory, which in French means Lou’s cottage.

Looking in a dilapidated condition at the moment, surrounded by dry grass and garbage dumped by the Mall goers, ‘Chateau De Lou’ was completely hidden behind all these concrete structures, and no one knew that it was a “Historic and Heritage House” in the Rome of the East, that is Mangaluru! It is learnt that this Mansion was once a Club used by Britishers during the yesteryears to have their social time, but when they moved it to Mangalore Club then, the dad of late J M Lobo bought that property.

To know more about Late J. M. Lobo Prabhu -he was a distinguished ICS officer and later a Lok Sabha MP representing Udupi constituency. He was a member of the fourth Lok Sabha when he was elected in 1967, a rare record in this region of a candidate defeating the undivided Congress. He also represented the Swatantra Party as its founding members. As an officer of the erstwhile Indian Civil Service J M Lobo had vastly contributed towards nation building. He was awarded a Coronation Medal by the King-Emperor in 1937 for distinguished service in the United Provinces.

Regarding Late Ms Louella Lobo Prabhu-she was a versatile and multifaceted personality engaged in the performing and creative arts. Hailed as a child prodigy in music, Ms Lobo placed Mangaluru on the musical map as a renowned concert pianist and composer of classical Western music. Having made a debut as a novelist in her teens, she continued to be a prolific writer of dramas, poems, articles and research works. She enjoyed a popular profile as a broadcaster on radio and television. Giselle D Mehta is also an acclaimed writer just like her mother.

Vidya Dinker, an activist speaking to Team Mangalorean said that someone should take an initiative in restoring this dilapidated heritage mansion, and make it as one of the landmarks of Mangaluru. As well said by Vidya, I too support her idea, that while many of the heritage and ancestral houses owned by Roman Catholics in Mangaluru, and with their children settling abroad and having no intention in returning back to their hometown, have made these homes way for concrete structures like apartments, commercial buildings and malls.

And, now that ‘Chateau De Lou’ has still managed to survive amidst major development and infrastructure of “Smart City-Mangaluru”, I only hope a very knowledgeable and mastermind of architect/building D B Mehta, the Son-in-Law of Late Mr and Mrs J M Lobo, together with his wife Ms Giselle Mehta, would take the initiative in restoring this Mansion, with an extreme-makeover and bring it back to its old glory- so that ‘Chateau De Lou’ will be yet another sightseeing place in Mangaluru for the cruise ship passengers and other visitors, after or before they visit the historic St Aloysius Chapel, right down the St Aloysius College Road?

I have fond memories of this house while my grandfather Sri M. D. Kini who happened to be a close Family Friend would visit the Family on important days in the year specially the New Year Day where we used to spend Quality time watching the Sea from the open porticos decked with rare artifacts. A perfect Gentleman Uncle Lobo & Aunt Louella were. A Glance up the stairs even to date which had some rare photos & Artwork all over the house with one of the best Furnitures in the right quantities not to forget the white colored Old… Read more »