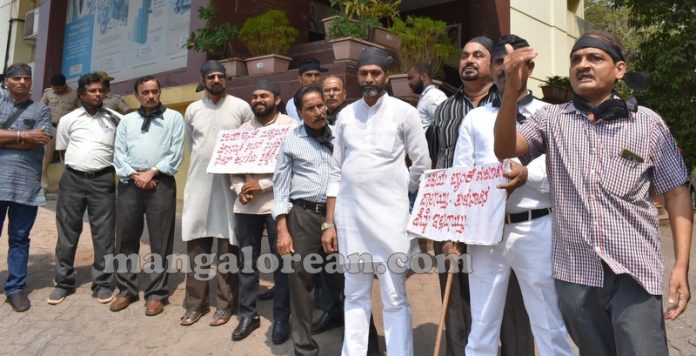 ‘A Friend You Can Bank Upon’- No More! Chowkidar PM Modi Stole Vijaya Bank from Us’- CPI(M) & VBUHS

‘A Friend You Can Bank Upon’- No More! Chowkidar PM Modi Stole Vijaya Bank from Us’- CPI(M) & Vijaya Bank Ulisi Horata Samithi (VBUHS)

A banner at the entrance of the Vijaya Bank Founders’ Branch on LHH road, near Jyothi Circle, Mangaluru reads ” Mangaluru Vijayees bid farewell to Vijaya Bank and welcome Bank of Baroda. As the Vijaya Man (logo) dips into the Horizon and amalgamation with Bank of Baroda after glorious 88 years of service to the nation, the BoB Sun (logo) shall raise brighter and stronger”. The logo, a humble man, full of courtesy and friendly appearance is one of the most eye-catching and attractive Logo. It is very popular and well known amongst the customers and the Public. Similar is the Tagline, “ A friend you can bank upon”.
As a former customer of Vijaya Bank, and also most of my family members bank with Vijaya Bank- I had very much liked the logo of the man very courteously welcoming His customers as they enter the bank premises, with a slogan ” A Friend You Can Bank Upon”-but not anymore, with the merger of Vijaya Bank with Bank of Baroda.

With the merger we are now taking about quite a few crores, changing the logo, including changes to be made to all the publicity matter, stationary, files, documents etc etc- so dumb, I guess. Somebody in the printing/publicity business is trying to make some extra bucks out of this? But this morning, members of Vijaya Bank Ulisi Horata Samithi and CPI(M) staged a protest in front of the VB Founders’Barnh located on LHH Road, Mangaluru and raised their voices against the injustice done to the people of DK by PM Narendra Modi run Central government.

Addressing the gathering, Muneer Katipalla of CPI (M) said, “Boasting as India’s Chowkidar PM Modi instead of providing security and retaining our district’s favorite Vijaya Bank, he has literally and forcibly stolen it from us, there making himself a “Chor Chowkidar”. Change or merger of Banks is merely a waste of precious money of the Bank, plus all the hassles and inconveniences the customers have to face. Vijaya Bank was founded on 23 October 1931 by Sri late Attavara Balakrishna Shetty and a few progressive Bunts of South Kanara. It became a household name and grew into an all India Bank under the dynamic leadership of Late Mulky Sunder Ram Shetty, and was nationalized on 15 April 1980. Sunder Ram Shetty was generous in employing a large number of unemployed youth in the Bank, irrespective of their caste and community. “

“The people of Dakshina Kannada have an emotional attachment with this Bank. A vast number of customers have now expressed their displeasure of the Bank merger with BoB. Merging a profitable Vijaya Bank with BoB which is running under loss of Rs 3102 Crores is the game played by PM Modi. Merging Vijaya Bank with the Baroda bank is an injustice to the founder of Vijaya bank, Mulky Sundaram Shetty. The Central government has taken a historic decision to merge the profitable Vijaya Bank with the Bank of Baroda which is facing a huge loss. The govt should have merged BoB with Vijaya Bank, thus the name of latter could have been retained. Today is indeed a Black Day for us, but we will keep on fighting until justice is served to the people who banked with Vijaya Bank for 88 years” added Katipalla.

Advocate Dinesh Hegde of Vijaya Bank Ulisi Horata Samithi said, “Vijaya bank was founded by a Mangalorean and it was our right to fight to retain its name. We tried our best to retain Vijaya Bank through various protests, but no one gave heed to our demands. Vijaya Bank had given jobs to thousands of people in this area, thereby giving life to many household members, but with central govt taking a wrong decision has ruined the lives of the people. Even our MP Nalin Kumar Kateel had remained numb on this issue, and now he is seeking our votes in the forthcoming elections. We will teach him a lesson. When people of the district were opposing the wrong move of the central government but the BJP leaders maintained silence. Even though the merger has taken place, but we will not stop our fight until we get justice. After elections results are out, we will raise our voices again, and see that Vijaya Bank retains its name back again”.

Former MCC Mayor Ashraf, Sunil Kumar Bajal of CPI (M) were among many others present during the protest. A meeting has been called by the Board members of Bank of Baroda for the media people this afternoon ( 1 April 2019) at 3.30 pm. Lalit Tyagi- Deputy Regional Manager, BoB Regional Office-Bengaluru will brief the media and share the Bank’s Mission in light of amalgamation.