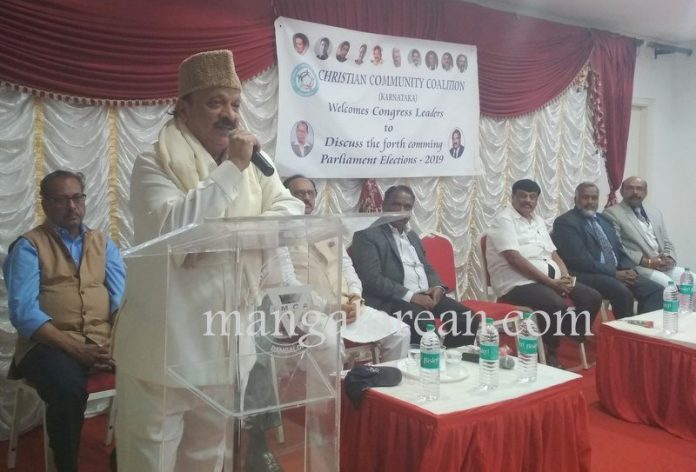 Bengaluru: With the candidate selection process activate in the back stages of the political parties for the forthcoming Parliamentary elections 2019, a clear signal is sent out by the Christian Community.

The Christian Community which plays a vital role in this country in the areas of education, health care, and social service realizes that there is no representation in the government today. This is the result of a systemic sidelining of true community leaders by the political parties. True leaders always put the community interests before personal and party loyalties. With over 50,000 educational institutions in the country today, Christians are the second largest education providers in the country today, next only to the government. Christians are pioneers in healthcare delivery reaching out to the rural areas where the corporate hospitals do not go to serve.

Read: Christian leaders come together to appeal for Loksabha seats for Christian community in Karnataka

Christian leaders brought together for interaction by Christian Community Coalition, a body of Christians from all walks of life, are sending out a clear message to the Congress party high command that this time a Christian should be given a parliamentary seat in the coming Loksabha elections. This is not merely because he/she is a Christian but is a practitioner of Christian values of liberty, freedom, equality, and justice that are also the values of the Congress party.

Prominent Muslim Congress party leaders, KPCC, and Bangalore District Congress Committee office bearers were also invited to this interaction. Speaking at the interaction, Shri. Roshan Baig, MLA Shivajinagar Constituency and a well-wisher of the Christians, acknowledged the contribution of Christians to society. It is a just demand from the Christian community to ask for representation for the Loksabha seats in Karnataka, he added. He also said that he will extend all support and cooperation to ensure the victory of the Christian candidate if the high command allots a seat to the Christian community.

Salim Ahmed AICC General Secretary speaking on the occasion said that the Congress party is a secular party which represents the diverse culture of this country, and the demands of the Christians for the Bangalore Central LokSabha constituency is a reasonable one considering the composition of the electorate that will look for an educated, experienced, widely accepted personality who can debate the issues of the constituency and the state in the parliament for the overall development of all people.

Mr. Syed Ahmed, President of KPCC Minority Department also addressed the gathering and shared his views that the Christian community does have able, highly qualified leaders who are an invaluable asset to the Congress party.

The Bangalore District Congress Committee president Mr. Shekar spoke at length and was in complete agreement with all the speakers who felt that this time the Congress party should consider a Christian Candidate from Bangalore Central Parliamentary Constituency.

Colonel George, the KPCC member, delivered the candidature of J Alexander, IAS Retd as the ideal candidate from the Congress party for the Bangalore Central Constituency.  J Alexander is a retired IAS officer. He is very articulate and has earned a full-time Doctorate from Karnataka University, but does not like to use the prefix Dr before his name. He retired as the Chief Secretary Govt. of Karnataka. He has vast experience and is widely respected by all sections of society. He is on the board of many companies and prominent educational institutions across the world.

Speaking on the sidelines over dinner the conversation at the table was interesting. One person asked about the other so-called aspirants for the seats from the community. “if they do not have time to be here today, will they be available tomorrow if they get elected. They are not our leader and Alexander is our true leader. We support his candidature.”