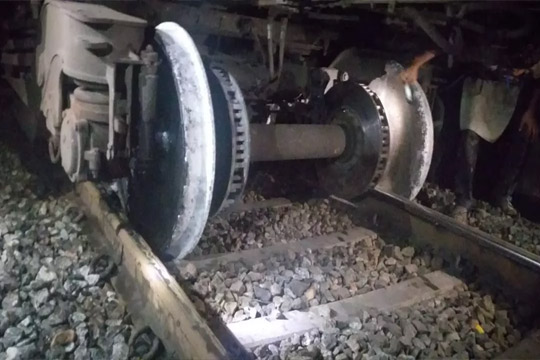 Coach of Kerala Express derails in Andhra, none injured

Hyderabad:  A coach of Trivandrum bound Kerala Express derailed at Yerpuda station here after a wheel broke. No passenger were injured in the incident.

South Central Railway spokesperson said that wheel of the pantry car of the Kerala Express broke while it was entering Yerpedu railway station in Chittoor district of Andhra pradesh.

The spokesperson said that no passenger was injured in the accident.

He said an accident relief train and medical relief van was rushed to Yerpedu to take up restoration works.

The SCR official said that stranded passenger were being sent by the same train by duly detaching the derailed pantry car from the train.

He said that senior railway officials arrived at the accident site to supervise relief and restoration.

This is second train accident in SCR in last one week. On November 11, a local train collided with Kongu Express at Kacheguda railway station leaving over a dozen passengers injured.