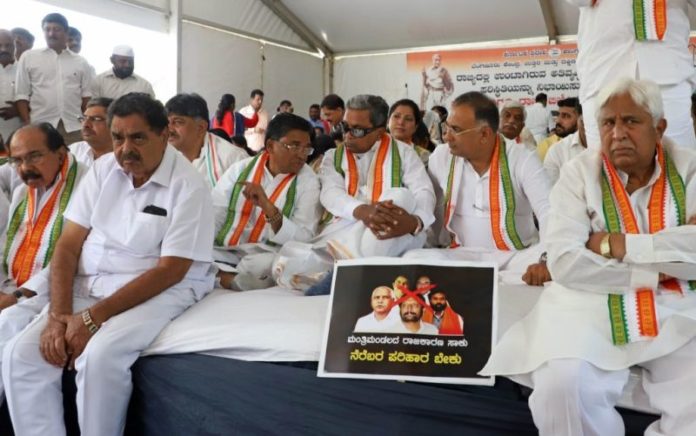 Cong open to ally with JD-S in Karnataka again

Bengaluru:  Buoyed by the dramatic return to power in Maharashtra with the NCP and the Shiv Sena, the Congress is open to ally again with the Janata Dal-Secular (JD-S) to form a coalition government in Karnataka if it wins more seats in the 15 Assembly bye-elections on December 5, a party leader said on Monday.

“We are open to tie-up again with the JD-S if we win majority seats in the Thursday Assembly bye-elections in the state, as our sole aim is to keep the BJP out of power as we did in Maharashtra despite ideological differences with the Sena,” senior Congress leader V.S. Ugrappa told IANS here.

The bye-elections have been necessitated due to the disqualification of the 14 Congress and 3 JD-S) rebel Legislators after they resigned from their Assembly seats in July in protest against the former coalition government’s poor functioning.

Bye-elections in two Assembly segments — Muski (Raichur district) and R. R. Nagar (Bengaluru) have been withheld due to litigation in the Karnataka High Court over their results in the May 2018 stare Assembly elections.

“Though our parties are contesting in the bye-elections separately to retain the seats we lost after the rebels resigned, we are confident of winning as many of them to ensure both the parties have enough numbers to form a coalition government again if the BJP fails to have a simple majority and its Chief Minister B. S. Yediyurappa resigns again,” asserted Ugrappa.

After vote count on December 9, the ruling BJP needs at least seven seats to have a simple majority, with 112 as the halfway mark in the 223-member Assembly, as it has 105, including one independent but excluding the speaker. Two seats remain vacant pending bye-elections in them.

The Congress, which had 80 members, including former speaker K. R. Ramesh Kumar, has 66 after losing 14 members and JD-S, which had 37, has 34 after losing 3 members. Both the parties have a combined strength of 100 and need 12 more seats to stake claim for power again in the southern state.

“If we win even 9 seats in the bye-elections and tie up with the JD-S, our combined strength in the Assembly will go up to 109. With the support of one BSP (Bahujan Samaj Party), one independent and one nominated member, we will touch the halfway mark to prove majority on the floor of the House in a trial of strength,” reiterated Ugrappa.

The Congress and the Nationalist Congress Party (NCP), which have been allies over the last two decades in the neighbouring Maharashtra, joined hands with the Shiv Sena to form a coalition government after the latter (Sena) parted ways with its pre-poll alliance partner the BJP in Maharashtra.

“As anything or everything is possible in democratic politics, our party high command will talk to JD-S supremo H. D. Deve Gowda to extend support to us to form a coalition government again as none of the political parties is in favour of a mid-term election in the state with the 5-year term of the present Assembly having more than 3 years to last,” pointed out Ugrappa.

A split verdict in the May 2018 Assembly elections threw up a hung House of 225 members, including one nominated, resulting in the Congress and JD-S forming a coalition government on May 23, 2018 as post-poll allies. Yediurappa had resigned on May 19, 2018 instead of taking the floor test as his 3-day government was short of eight seats, excluding speaker to prove majority in the House.

“We are confident of winning 10-12 seats that we lost due to the rebels resigning from them and contesting as the BJP candidates. The electorate is angry with them because they were voted on our Hand symbol on a Congress ticket. The Supreme Court on November 13 also upheld their disqualification by former Assembly speaker K. R. Ramesh Kumar though it allowed them to re-contest,” recalled Ugrappa.

In a triangular contest, the JD-S also fielded candidates in all the 15 Assembly constituencies against the Congress and the BJP, including the three it lost due to its rebels resigning. Their resignation led to the fall of the 14-month-old coalition government on July 23 when H. D. Kumaraswamy failed to win the confidence motion he had moved on July 18 on the floor of the House.