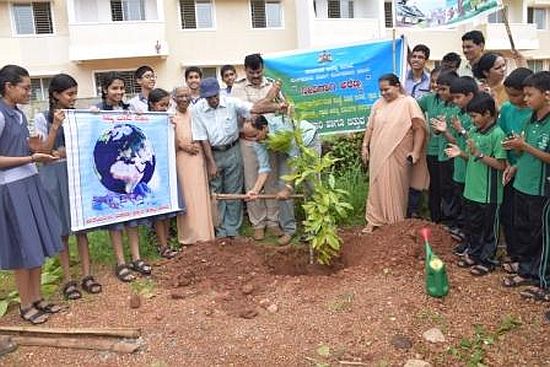 Mangaluru: “Connecting People to Nature”, the theme for World Environment Day 2017, implores us to get outdoors and into nature, to appreciate its beauty and its importance, and to take forward the call to protect the Earth that we share. Despite repeated global pledges to protect the planet’s environment, the trees, the animal and other living species and their habitats – and the goods and services they provide – the earth natural resources continue to decline at an unprecedented rate. Human activities are the cause. In such a grim situation, the celebration of Vanamahotsav 2017 – provides a timely opportunity to focus on the urgency of safeguarding our valued environment for the wealth, health and well being of living beings on the Planet.

“If a tree is saved even at cost of one’s head, it’s worth it” said the noted activist Amrita Devi Bishnoi. This is the reason why India has so many festivals related to trees. One of them is the “Vanamahotsav Day” or the “Forest Day” or “Festival of Trees”. It was started as a crusade with the lofty purpose of saving the mother earth-it was started in 1950 by K.M.Munshi, the then Union Minister for Agriculture and Food to create enthusiasm among masses for forest conservation and planting trees. It is a week-long festival, celebrated on different days in different parts of India. In its original aim, every citizen of India is expected to plant a sapling during the “Week”. Also, awareness campaigns about benefits and protection of trees and the harm caused by cutting down of trees are held. It is the festival of life.

It is annual and is to be celebrated during the month of July. Monsoon is there during July and is a special month for trees and tree planting. The main objective of the festival is to inculcate tree consciousness and love of trees among the people and popularise the planting and tending of trees in farms, villages, schools, municipal and public lands for their aesthetic, economic and protective needs. And to observe “Vanamahotsava”, the members of Eco-Club of Mount Carmel Central School (MCCS) from VI to X Std, the management and staff engaged themselves in tree planting at various spots around the campus, following a formal programme which was held at the Mother Veronica Hall, MCCS-Mary Hill on Friday, 21 July.

The program began with a short prayer service invoking God’s blessings. Meghana of class X accorded the welcome address to the Chief Guest Shiva Prakash, Manager of the Environmental department, OMPL- Mangalore Petrochemicals Ltd; Shridhar, the Forest Range Officer; Sr Carissima AC- Correspondent, MCCS; and Krishnappa K, an Environmentalist. They were welcomed by the Eco Club Members with a floral tribute. The Students of Eco Club brought out the significance of Vanamahotsava beautifully with the help of Power Point Presentation, display of placards and banners. The message of “Save the Trees” was reiterated through a Cultural Programme consisting of dance, song and a skit. The students of the club showcased their talents performing two dances which depicted the fate of trees in the world today. A mime show was enacted by the boys that depicted water crisis and the need to save water. A short skit by the students created awareness on the need of trees to save our environment, depicting hypothetical unfortunate lifestyles of the future. The sketch of the play showed the creativity and farsightedness of the club members.

The Chief Guest Shivaprakash in his address, cited that ‘an imbalance in the five Tatvas (elements) of nature namely Agni, Vayu, Jal, Prithvi, and Akash which will have a direct impact on the environment which indirectly affects our health. “Imbalance of these tatvas cause disease in human body and imbalance of these in nature would cause natural catastrophe. Hence our forefathers sanctified and reversed these tatvas and ensured connection of nature with people. Presently Vanamahotsav is celebrated by schools, organisations spearhead by forest department and patronised by industries, responsible corporates like OMPL, to conserve forests”.

“Ice melting phenomenon and eventual submergence of the coastal region like Mangaluru would be prevented by students, like those of Mount Carmel, with a noble act of planting trees. Similarly, air pollution would be controlled by MCCS great initiative. Also, there would be heavy downpour by your positive step of planting trees and Kadamba trees in particular. The encouragement and motivation by this institution to its students and friends would mould you as Mount Carmel product-a brand ambassador of the future conservationist.
So Vanamahotsav is the festival of life to save the environment, to which we owe. Generally, native trees are planted as they readily adapted to the local conditions, integrate into eco-systems and have a high survival rate. Besides, such trees are helpful in supporting local birds, insects and animals as well.” added Shivaprakash.

Guest of honour- Shridhar emphasised the theme “Forest for Water” by his interactive address, with the students. He said, “During this celebration, afforestation drives are launched in a bid to retain the vanishing forest covers of the country. Humans with their greedy needs have cut down a large part of the forest cover. In the name of urbanisation and globalisation of cities, trees were considered as the major stumbling block. They came in the way of flyovers, roads, hoardings and pavements and hence the easiest solution was to get rid of them altogether. This declining number of trees has brought a major change in climate too. So there is a dire necessity of festivals such as Vanamahotsav, to restore the forest cover in the country.”

“Through trees, we get plenty of oxygen, but if trees are chopped down we lose oxygen. The dwindling number of rainy days and increase in the intensity of precipitation events raises a serious question on the increasing developmental activities taking place at the cost of cutting a large number of trees. With continuous human intervention against Nature, certain disasters like drought, floods etc can no longer be considered ‘Natural’. The ‘Vanamahotsav’ festival of trees is a beautiful initiative to save the environment, to which we owe a lot. Generally, native trees are planted as they readily adapted to the local conditions, integrate into eco-systems and have a high survival rate. Besides, such trees are helpful in supporting local birds, insects and animals as well. State Governments and civic bodies supply saplings to schools, colleges and academic institutions, NGOs and welfare organisations for planting trees. Also, Forest department will provide trees if anyone requests for them. Let us join hands and save mother earth by doing this small contribution” added Sridhar.

Principal Sr Melissa AC advising the students said, “Growing trees is good for environment-we can breathe clean air. We are taking all steps to augment the green cover. My compliments to the Eco-Club members and all those who were responsible for taking up the initiative in observing “Vanamahotsava”. The constant felling of trees has been a problem for a long time now and as a result of that, it is extremely important for us to create awareness for the same. And everyone must try and actively involve themselves in this practice as well. Vanamahotsava is thus a widely celebrated festival and should be celebrated as more than a day of planting trees and celebrated as any other festival. I request you all to at least plant a flower/fruit plant in your house/apartment to save the environment. Let’s all Go Green!”

Sr Melissa AC also thanked the guests for their efforts and for devoting their time to be a part of the school’s Vanamahotsava Celebration – 2017. She also thanked the Environmental Department of ONGC Mangalore Petrochemicals Ltd for sponsoring 50 saplings to be planted in and around the school and the Forest Department for their assistance in the process of planting. The Vote of Thanks was delivered by Shamim of Class VII and the programme was compered by Apoorva and Brinell of Class X. After the formal programme, 10 saplings were planted on the school campus by the dignitaries along with the Eco club members, as a part of Decennial Celebration of MCCS and the other 40 in the neighbourhood.

The entire celebration of the day motivated the students to develop consciousness towards care and conservation of Nature, reflecting the feelings of gratitude and respect for the many bounties that Mother Earth graciously offers to all her children. In conclusion, Vanamahotsav will help in increasing forest cover and conserve biodiversity. It is also the only viable option to promote fruit and timber trees. Moreover, trees also create decorative landscapes, offer shade and help protect soil from deterioration. Through Vanamahotsav, we can bring back our lost forests. The festival educates the awareness of trees among people and portrays the need of planting and tending of trees, as trees are the best ways to prevent global warming and reduce pollution. It also popularises the planting and tending of trees in farms, villages, municipal and public lands for their aesthetic, economic and protective needs.Therefore observe Vanamahotsav to bring back our lost forests and ultimately our Environment.