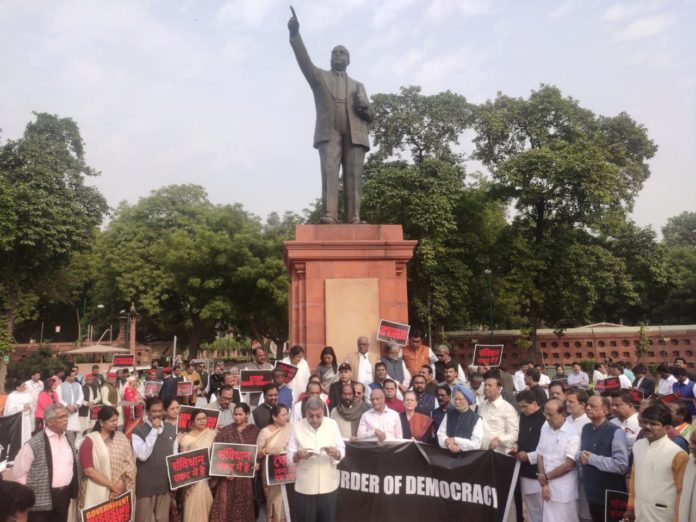 New Delhi: The Congress on Tuesday held a protest in front of the statue of B. R. Ambedkar here with former Prime Minister Manmohan Singh, Congress President Sonia Gandhi and party MP Rahul Gandhi participating in it.

The Congress during the protest tried to make a point that the Constitution written by Ambedkar is being undermined today by the BJP-led government.

Congress leader Rahul Gandhi has said in his tweet, “congratulations and best wishes to all fellow citizens. On this day tributes to our great leaders for their contributions and we are committed to save the Constitution as we are proud of it.”

The Congress along with its allies also boycotted the event organised in the Central Hall of the Parliament on the Constitution Day.

Congress General Secretary Priyanka Gandhi also tweeted, “Today is Constitution day and people sitting at power are sidelining the ethos of the Constitution, and trying to weaken the power of people by playing money power. We are committed to confront the money power with the Constitution and take pledge that we will stand with the democratic values strongly “