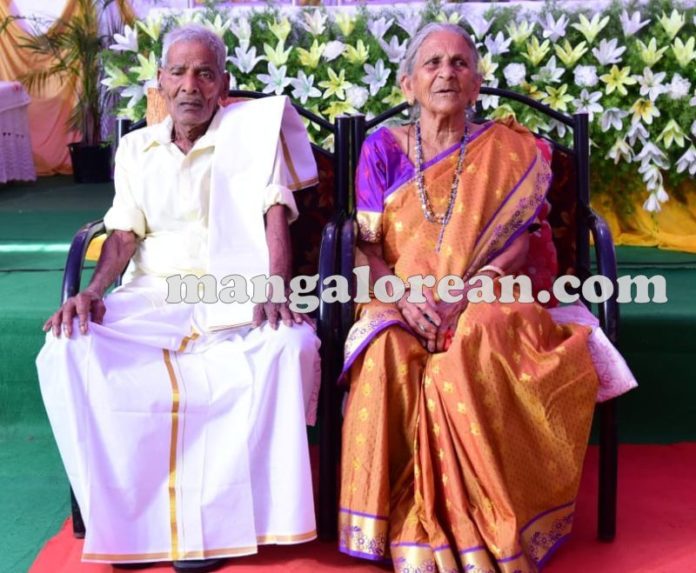 Mangaluru: People joke when they see or meet a older couple having 12 or 13 or 14 children, and pass a comment on them saying “I bet there was no Television during those years for entertainment, making Babies was entertainment then” – and in the case of our young “Love Birds” Joseph and Cosses, having 13 children, of which one daughter had passed away when she was a child, so now they are proud parents six sons and six daughters, of which one daughter is a nun, and rest all married- it looks like Joseph and Cosses never bothered to follow the India’s National Family Welfare Programme slogan launched in 1951, which said “Hum Do, Hamare Do (We Two, Ours Two), or in Kannada there was a slogan “Keerthi Gobba Maga, Aarathigondu Magalu” (A Boy for Fame, and One Girl for Fame). That was just on the lighter side of vein of the beginning of this article, but we need to congratulate this Pais Couple who were married very young, when they exchanged wedding vows on 20 May 1941, a promise Joseph said was inviolable. Their secret is “following the Lord’s ways,” he said. “You become one when you’re married. We are one until we die.” Good health has been on their side, too, Cosses said. “The Lord’s been very good to us.” 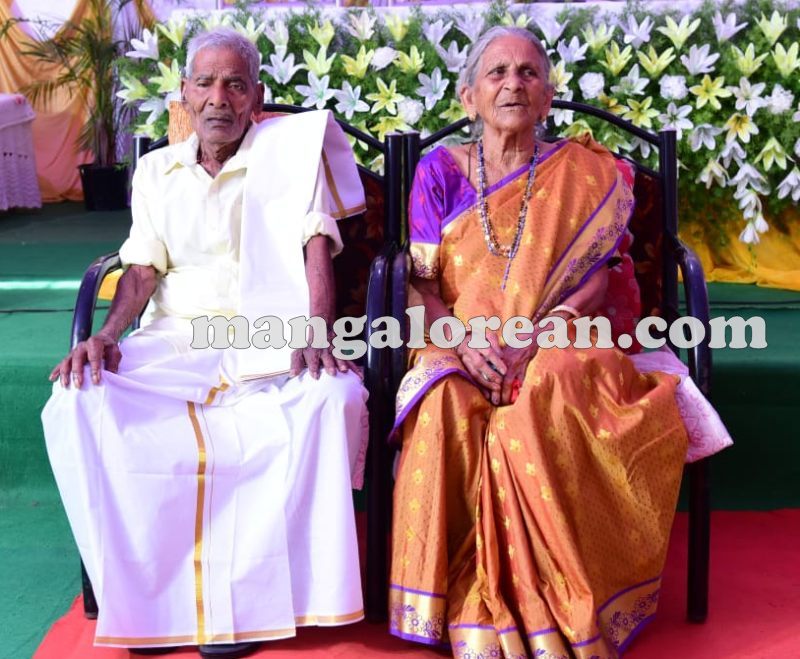 The average life expectancy in India is between 60-75 years, but one couple in Madanthyar, in the outskirts of Mangaluru, is well beyond that as they celebrated 78 years of marriage recently. They were married on 20 May 1941- and together, the two have seen a couple of wars, the loss of a girl child and the blessing of 12 Children, 61 Grand Children, and 61 Great-Grandchildren. The couple says there’s no secret to a long-lasting marriage. Although, Joseph adds that never arguing can go a long way- and also staying away from junk food, and consuming home-grown food has made them live longer and healthy.

They sit side by side on a “love seat” in their traditional old-fashioned house, their eyes meet, they smile. They are still just romantic like they were in their younger days, and You’d think Joseph and Cosses are newlyweds. Far from it. But this poignant interaction bears witness that true love endures. And theirs has. For 78 years. Consider the life expectancy for a man born in 1919 was 35.6 years; 41.2 for a woman. But that a husband (100) and wife (94) both would live up to 100 and closer to 100, however, is very rare. But Joseph and Cosses are an example of a true, caring and devoted Husband & Wife who have cherished their 78 years of Happy Married Life. 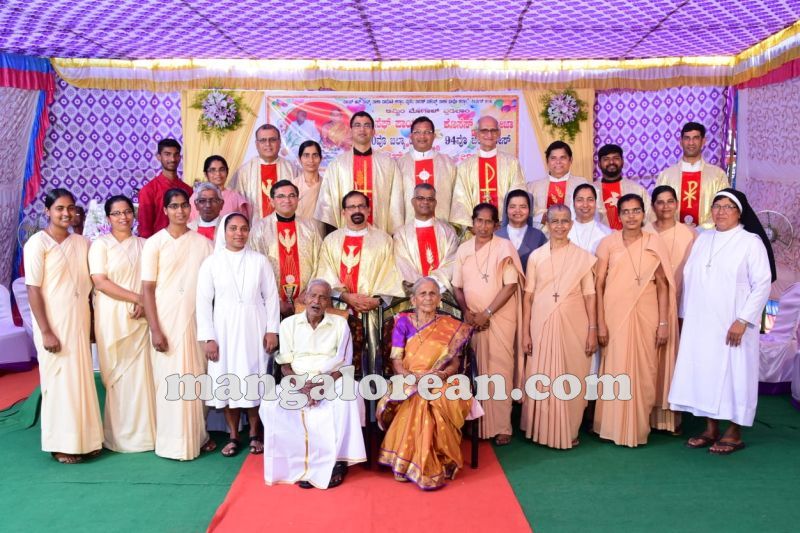 The Pais Couple are just about nine years shy of the longest marriage recorded by Guinness World Records — that of Herbert and Zelmyra Fisher of North Carolina, USA who had been married 86 years and 290 days as of Feb. 27, 2011, when Herbert died at age 105. Zelmyra died two years later at age 105. Still, the Pais defy the odds; members of a rarefied echelon when it comes to longevity — both in age and marriage. When asked what is the secret to a long and successful happy marriage: “Having a wife that can really cook good,” Joseph laughed. “That might have something to do with it because I’ll tell you, he is a big eater,” said Cosses. “Make sure the relationship is honest. Try to do what’s right in God’s eyes. It’s good to laugh together. Have fun with each other, but don’t make jokes at the expense of the other. Always be sure to put God first in your life. Be always willing to help and stay alert to your spouse. We have prayer every day together in the morning and night. We don’t keep our mind on our troubles.” added Joseph.

One of their son’s daughter-in-law Saumia D’souza in Bengaluru said it was really special to be able to honor their parents and grandparents by their children, grandchildren and great-grandchildren on their big day, after all, they’ve done for the family. “It’s special because of how much they have poured into their family’s life. There are no strangers to their family so being able to honor them for the years they’ve hosted us is just really sweet. I have heard them say ‘This is a little piece of heaven’ every time the family is together, and the 78th wedding anniversary celebration did bring miles of smiles on their faces, and we could see them beaming with pride and joy. We are all happy that we made a difference in their lives on that memorable day” said Saumia. 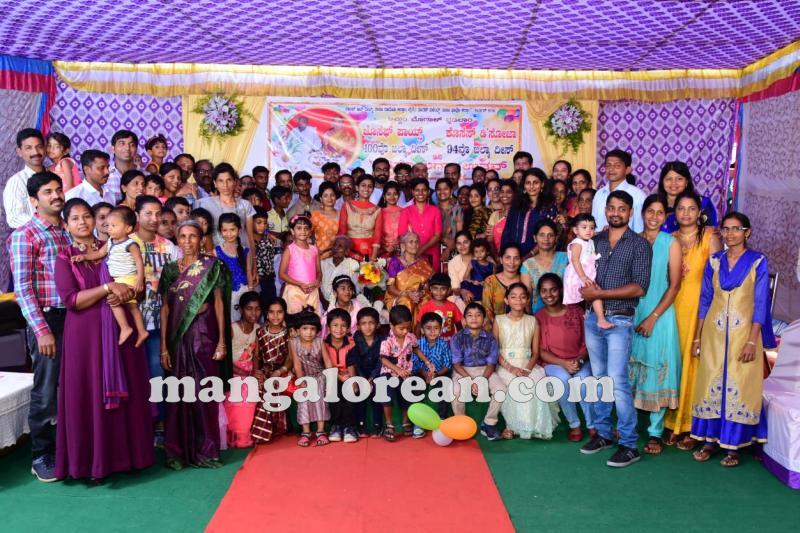 The couple’s five sons stay nearby to each other in Madhyanthar, where they help out in the rubber plantation farm of Joseph and Cosses. One son is in Mumbai, while all married daughters stay in an around Mangaluru with their families- While husbands work, all wives are home-makers. The Couple’s grand 75th Wedding anniversary celebration was held three years back, while this year on 9 May, Joseph’s 100th birthday and 78th wedding Anniversary was celebrated with a Eucharistic Mass concelebrated by Fr Vas, Parish Priest of Madanthyar Church, along with other 10 priests, out of which one priest was their grandson, followed by a grand celebration, all held at home under a decorated Shamiyana, where more than 500 people were part of the celebration. It was indeed nice of Pope Francis to send his papal blessings from Vatican-Rome (see pic of Pope’s document) 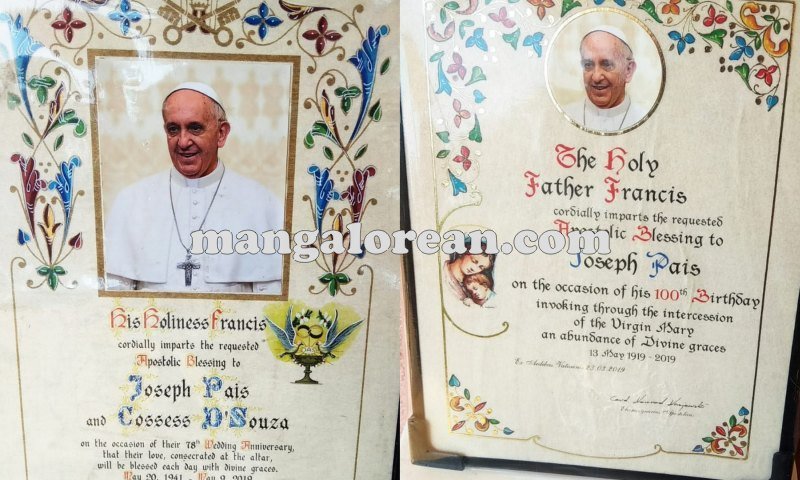 Finding true love which continues to thrive and grow over the course of time is truly a blessing. Looking at divorced couples make the present wedded couples feel that marriages are ephemeral. But Joseph and Cosses have proved that marriages are truly eternal. A romantic journey, thrilling ride, fun adventure, amazing voyage, beautiful expedition, memorable escapade, heavenly trip – I guess this is the definition of their marriage and the path to their destiny. This couple possesses a true love which is sure to withstand the tests of time and continue to grow with the passing of the ages.

In conclusion, Seventy Eight years is a long life. Eighty years of marriage is a testament to longevity — and love. This nonagenarian couple has been the living example of the wedding vow ‘to have and to hold’. They both have spent nearly eight decades together through thickness and thin, joy and sorrow, hardship and good times, and taking care of their 13 Children, with love and care. It’s indeed nice to see that this pair of great-great-parents, who tied the knot in 1941, are still happily married after supporting each other through good and bad times. 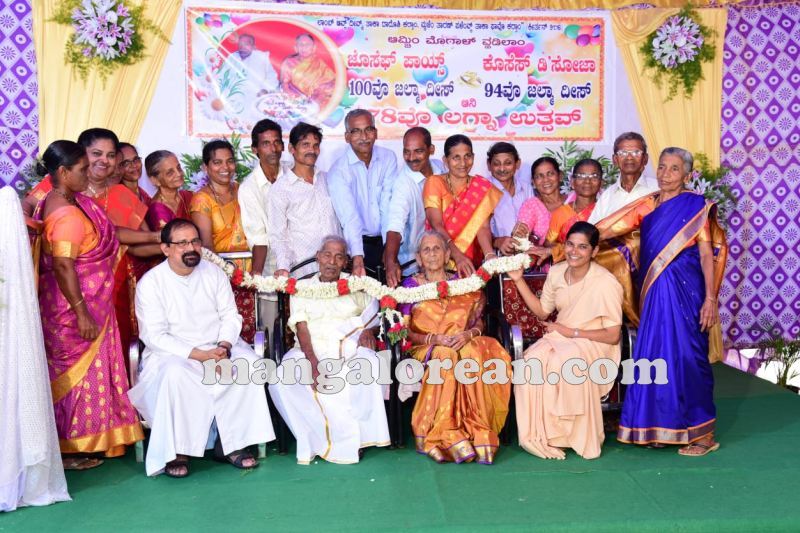 Team Mangalorean extends heartfelt wishes with a message saying, “Through the good times and the bad you two have withstood the true test of time, every year growing with each other and growing closer together. May your life continue to be filled with love, laughter and happiness. It’s truly amazing to see that you’re still so deeply in love with one another after so many years. May you have many more happy anniversaries to come. Very few people have the integrity and strength to stay together through thick and thin, you’re a beacon of inspiration and hope to all those around you. Sending you many blessings and best wishes. May you continue to live a full and joyous life together for many more years yet to come. Happy 78th Wedding Anniversary!

To Love & To Cherish, Till Death Us Do Part..! Romantic 33 Couples Celebrate 40 Plus Yrs of Wedded Life

Happy Wedding Anniversary. I guess its very very unique seems, rare to hear. May God Bless the evergreen young couple and Bless the children + Grandchildren who are looking after them. If Gods plan stay going, there are only 22 years for the wedding anniversary to be the 100th one. May God Bless you all.

They both still look young, healthy and adorable !
God bless them with many more years of healthy life together.