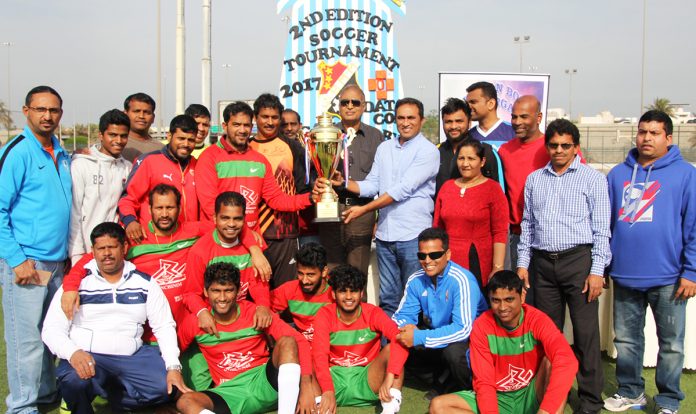 Kuwait: A star-studded CRC Chinchinim were crowned champions of the second edition All India 7-aside Football Tournament organized by Xavierian Boys, Madel, Margao-Goa and held at Bayan grounds in the last week of November 2017.

Kuwait Indian Football Federation (KIFF) president Derick Gomindes was the chief guest at the event and spoke on the occasion.

Lawry Pinto was the guest of honor. Other dignitaries present on the occasion included Austine Abreo, Sports secretary of KIFF and Lourdina Rodrigues.

Derick Gomindes while congratulating the winners, praised Xavierian Boys for organizing a grand tournament. Apparently, funds raised from the tournament would be donated to charity according to Rafael Rodrigues, chief coordinator of the tournament.

The event was made all the more spectacular with expert commentary by Gasper Crasto; cake was served to all spectators.

In a noteworthy gesture during prize distribution ceremony, Madel Boys honored Manuel Rodrigues, one of the members of the organizers, for his contribution towards Indian football and the Goan community in Kuwait and his undying support towards the tournament.

The organizers Xavierian Boys also had a special artifact memento for Jomana Kamal Hana, a great supporter of charity and the tournament.

In the vote of thanks proposed, Lourdina Rodrigues of Xavierian Boys thanked all the participating teams, officials, sponsors and everyone who rendered their help in making the tournament a success.

Apart from trophies for Winners, Runners-up and semi-final losers, the winners and runners-up were awarded cash prizes and glittering individual trophies.

Following other prizes were awarded at the presentation ceremony: