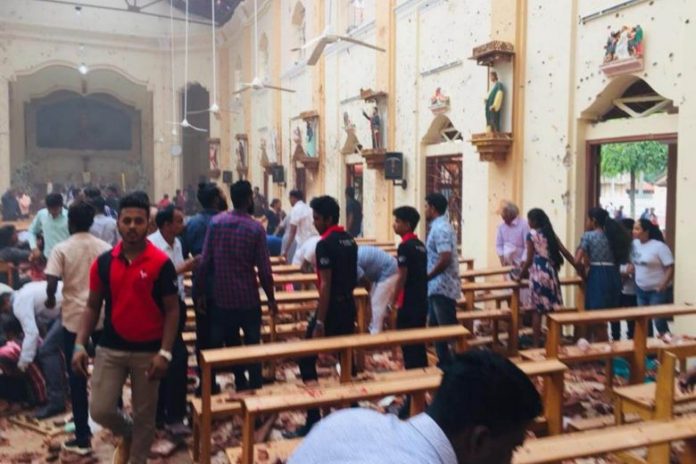 Colombo: Multiple blasts which shook Sri Lanka on Easter Sunday claimed 207 lives while more than 450 others were wounded, police said.

Altogether eight explosions have ripped through the country, with six blasts hitting in the morning and two in the afternoon. A curfew has been imposed until 6 a.m. on Monday.

Colombo: Sri Lanka declared a nationwide curfew after a string of eight explosions, mostly in Colombo, left at least 185 people dead and over 400 injured on Easter Sunday, authorities said.

Xinhua news agency reported that the death toll in the multiple blasts had risen to 185 even as two fresh explosions occurred in two Colombo neighbourhoods in the afternoon.

Colombo: At least 138 people were killed and more than 400 injured when a string of suicide bombings rocked luxury hotels and churches in Sri Lanka on Easter Sunday in the island’s bloodiest day since the end of the civil war, media reports said.

The deadly explosions rocked at least three luxury hotels and a church each in Colombo, in Katana, some 50 km north of the capital, and in the eastern province of Batticaloa around 8.45 a.m. when hundreds were gathered to celebrate Easter.

The state-run Daily News newspaper put the fatalities at 138 and said at least 402 were injured. Many of the injured were said to be in serious condition. But other news outlets gave varying casualty figures, ranging from 70 to 100.

Minister of Economic Reforms Harsha de Silva, who visited a few of the attack sites, described the carnage.

“Horrible scenes. I saw many body parts strewn all over. Emergency crews are at all locations in full force. (…) We took multiple casualties to hospital. Hopefully saved many lives,” Efe news quoted the Minister as saying.

Images circulated in local media showed the magnitude of the explosion in at least one of the churches, where the ceiling had been partially destroyed, and corpses were strewn around among the rubble, Efe reported.

The Minister said that some of the casualties were foreigners.

President Maithripala Sirisena, in a special message which was read out on local news channels, urged the public to remain calm and cooperate with the authorities to conduct swift investigations into the blasts, reported Xinhua news agency.

“I am shocked and saddened by the situation that has occurred. Investigations have been launched to look into what conspiracy is behind these heinous acts. Please remain calm and do not be fooled by rumours,” Sirisena said.

No one has yet claimed responsibility for the attacks.

Christians in Sri Lanka had been celebrating the Easter Sunday, an important festival marking the resurrection of Jesus Christ and the culmination of week-long festivities.

Christians form around 7 per cent of the Sri Lankan population, with the Buddhists accounting for around 70 per cent, followed by Hindus and Muslims.

Sri Lanka’s dragging civil war involving the government and the Tamil Tigers ended in May 2009, leading to a decade of peace.

Colombo: At least 40 people were killed and more than 250 others injured on Sunday as explosions ripped through three churches and three hotels in Sri Lanka, media reports said. 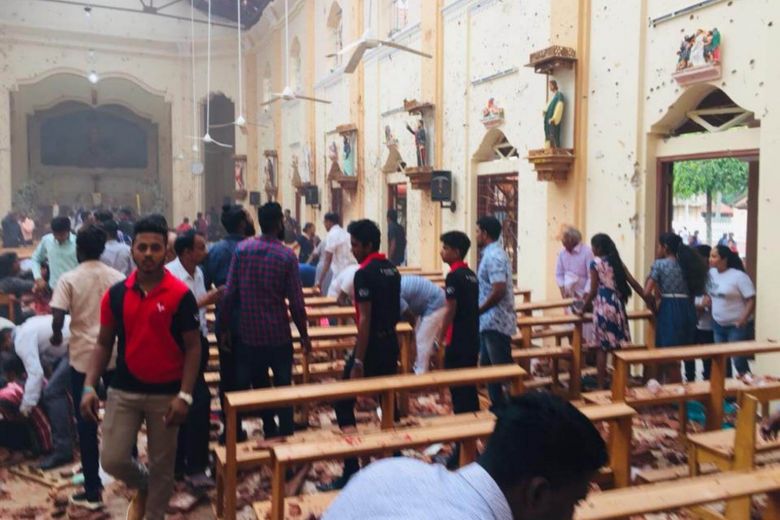 According to the island nation’s The Daily Mirror newspaper, explosions were reported as hundreds of worshipers gathered at the St. Anthony’s Church in Kochchikade, Kotahena, St. Sebastian’s Church in Katuwapitiya in Katana, and the Zion church in Batticaloa to commemorate Easter Sunday.

The other three blasts where reported at the Shangri-La, Cinnamon Grand and Kingsbury five-star hotels in Colombo.

Of the 40 victims, 25 were killed in Batticaloa, according to the Batticaloa Teaching Hospital.

An emergency meeting has been called over the attacks, Minister Harsha De Silva said in a tweet.

“Secretary of Defence and I am at Kochchikade Church. We were also at Shangri-La and Kingsbury Hotels. Rescue operations are underway. Many casualties have been reported including foreigners,” he said and requested people to stay calm and indoors.

Images on social media showed the inside at the St. Sebastian church with a shattered ceiling and blood on the pews, the BBC said.

No one has yet claimed responsibility for the attacks.

Local media are reporting that at least 20 were killed and 160 injured in the blasts.

The hotels and one of the churches are in the nation’s capital Colombo. The other church is in Negombo, north of Colombo.

A source in the police bomb squad said that one of the explosions was at St Anthony’s Church in Kochcikade, Colombo. “Our people are engaged in evacuating the casualties,” the source said.

Sources from two leading tourist hotels in Colombo also confirmed the explosions but did not give any details.

Bloomberg reported that police and emergency vehicles have blocked the entrance to the Shangri-La Hotel in Colombo, where there’s visible damage, including shattered windows, above the main entrance where a cafe was located.

“Eighty people have already been admitted, and more are still coming in,” an official at the Colombo National Hospital told AFP on condition of anonymity.

St Sebastian’s church at Katuwapitiya in Negombo posted pictures of destruction inside the church on its Facebook page, showing blood on pews and the floor, and requested help from the public.

“A bomb attack to our church, please come and help if your family members are there,” read a post in English on the Facebook page of the St Sebastian’s Church at Katuwapitiya in Negombo.

There were no immediate claims of responsibility.

Only around 6 per cent of mainly Buddhist Sri Lanka is Catholic, but the religion is seen as a unifying force because it includes people from both the minority Tamil and majority Sinhalese ethnic groups.

New Delhi: External Affairs Minister Sushma Swaraj said on Sunday that she was in touch with the Indian High Commissioner in Colombo as six explosions hit churches and hotels in Sri Lanka, killing at least 20 people.

“Colombo – I am in constant touch with Indian High Commissioner in Colombo. We are keeping a close watch on the situation,” the Minister said in a tweet.

The official handle of the High Commission of India in Colombo also said in a tweet that they were also “closely monitoring the situation”.

It also provided helpline numbers for “Indian citizens in need of assistance or help and for seeking clarification”.

The explosions were reported as hundreds of worshipers gathered at the St. Anthony’s Church in Kochchikade, Kotahena, St. Sebastian’s Church in Katuwapitiya in Katana, and a third one in Batticaloa to commemorate Easter Sunday.

Blasts where also reported at the Shangri-La, Cinnamon Grand and Kingsbury five-star hotels in Colombo.

“India condemns the terror attacks in Sri Lanka and offers its condolences to the people and government of the country,” Kovind tweeted.

“Such senseless violence, aimed at innocent people, has no place in civilised society. We stand in complete solidarity with Sri Lanka.”

Modi added: “Strongly condemn the horrific blasts in Sri Lanka. There is no place for such barbarism in our region. India stands in solidarity with the people of Sri Lanka. My thoughts are with the bereaved families and prayers with the injured.”

A string of explosions rocked churches and hotels in Colombo and elsewhere during Easter Sunday.

Kolkata:  West Bengal Chief Minister Mamata Banerjee on Sunday expressed grief and concern over the blasts in Sri Lanka in which at least 138 people were killed and more than 400 injured.

“Saddened and shocked at the disturbing news coming in from Sri Lanka. All forms of violence are unacceptable,” Banerjee tweeted.

She wrote: “Easter is a Festival of peace. My thoughts and prayers with the grieving families.”