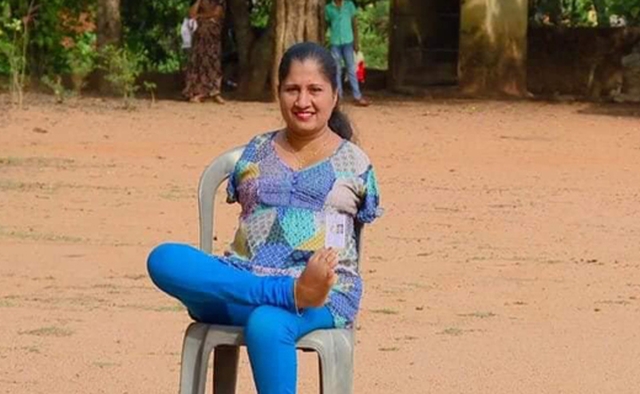 Mangaluru: As the saying goes, “Where There Is a Will, There is a Way”- Sabitha Monis, aged 34, hailing from a rural village at Gardady-Belthangady Taluk, even in spite of her disability being born without arms, she has and still performs any job, that a regular person can do. And when it come to exercising her franchise on “Voting Day”, Sabitha, a informed citizen has never missed any polls, be it local, assembly or national elections. In the absence of her arms, she uses her toes to cast her vote. Her willpower and sense of social responsibility are commendable. Having also voted in the 2018 Karnataka Legislative Assembly election which was held on 12 May 2018, even this year on 18 April 2019 in the Lok Sabha elections, Sabitha did exercise her franchise at a polling booth in Gardadi near Padangadi, in Belthangady Taluk.- and after voting, she proudly posed with her inked toe for a few photographs and selfies. 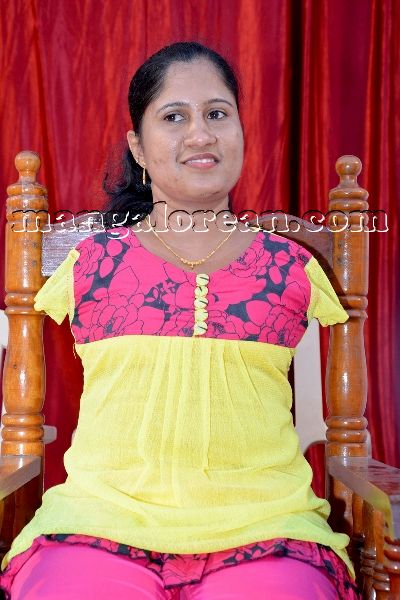 Now regarding this L S Elections, when large number of people went to vote on 18 April, in the case of Sabitha, absence of hands has never dampened her spirits, and her determination to vote in the election definitely conveyed a clear message to the people who stayed home out of inertia and failed to be a part of the election process. Sabitha strongly believes that to make a change in society, voting is the first step. It gives citizens the power to elect their political representatives. As a result, they get a chance to hold their representatives accountable. 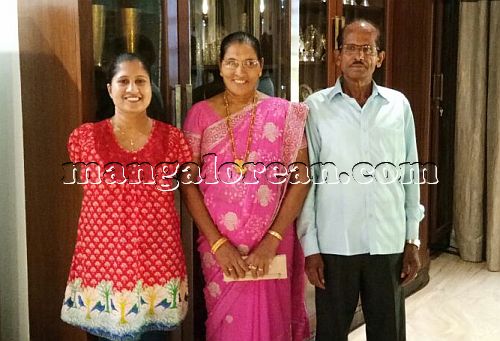 Sabitha Monis with her Parents- Basil and Ms Benedicta Monis

On a day when a large number of able-bodied voters decided to stay away from polling booths rather than exercising their right to vote and support democracy, this young lady who has no hands, came to the polling booth and used her toes to vote for the candidate of her choice. Although the officers on poll duty were instructed to apply indelible ink to the ring finger of the voter’s left hand, the officials had to make an exception in this woman’s case. They applied ink on her toe in place of finger. Apart from her daily household duties and taking care of her personal duties, Sabitha every day morning takes either the service bus or the Alva’s College bus to take her work place from her house. Having done her postgraduate in MSW and sociology at Alva’s College-Moodbidri, she currently works as a student welfare officer at Alva’s Education Foundation. Chairman of Alva’s Education Foundation Dr. Mohan Alva was generous in offering her free education, when she did her education at Alva’s College, and he was also kind enough to offer her a job at Alva’s institution. 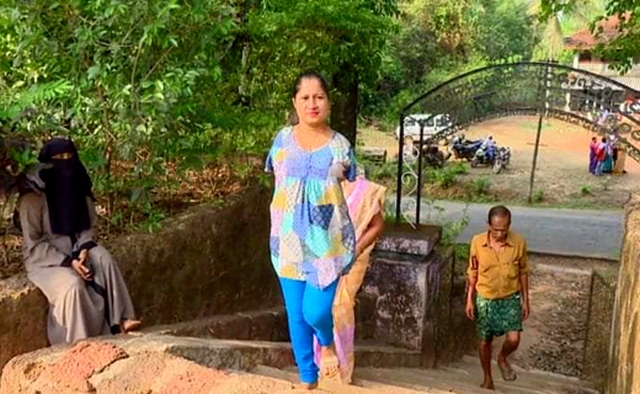 When you think of all that we do with our hands, it’s hard to imagine completing even the most basic day-to-day tasks without them. Though the world has evolved itself over centuries with humans reaching up to Mars and Moon, many unfortunately still live in the old time frame, when people once believed that being born as a differently–abled child was a curse. However, only few have realized that being differently-abled is also a blessing and have gone out of their way and achieved great fetes. One such inspirational person is Sabitha Monis, who was born without her hands. 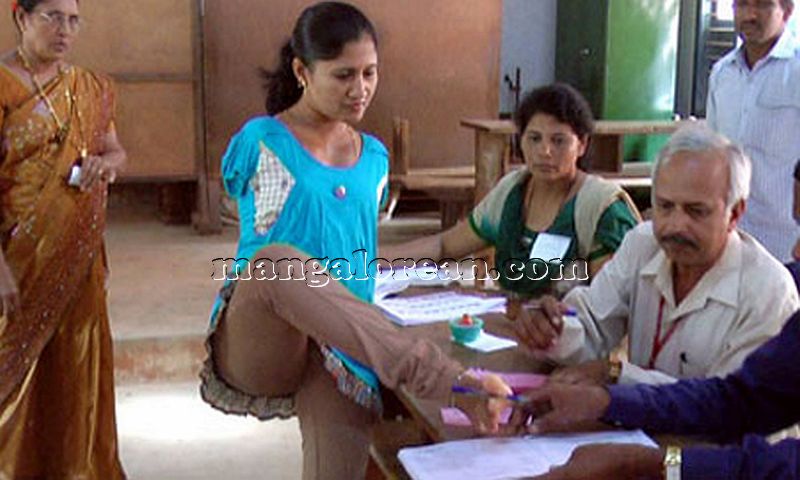 But same never hindered her life in anyway. Sabitha having lost both her hands by birth lost no hopes as a kid. Instead, her disability made her so strong that she ensured she learnt to write with her legs. Though armless, she isn’t letting her disability stop her from living life to the fullest. “There’s nothing that can substitute the tactile ability of flesh and bone, and my feet have that ability. Naturally people saw me not having arms as a limiting factor, but I was there to prove them wrong.” Sabitha who is unrelenting, positive, and unstoppable, and has opened every ones eyes to prove new possibilities and that anything is possible even if you have disabilities.

Apart from her daily personal routine activities, Sabitha makes her own bed, uses her phone, writing, applying makeup, and what not. Certain things which she is not able to do, is helped by her parents and others. Deformity has also not stopped her from achieving in a big way in the academic field. She has passed MSW with 67 per cent, BA with 67 per cent and PUC with 81 per cent marks from Government Junior College, Venur, Belthangady. All along she has had a remarkable academic record. She had scored 82% in the 7th standard & 71% in the 10th Std. This is a milestone in her life because Sabitha is extraordinarily special. She passed PG Diploma in human resource management with a first class from Kuvempu Open University, in the MA sociology course. She has written all these exams using her feet.

As she has been deprived of hands since birth, she has written these examinations using her feet! Her parents are extremely proud of their daughter and overjoyed with the success of their daughter who in spite of her handicap has proved her worth. Her father Basil Monis and mother Benedicta Monis are agriculturists, where they have raised paddy and other vegetables. Sabitha’s story is really a wonderful saga in individual effort. When she was born without either hands down the shoulder, the parents were very sad and forlorn as to what fate would lie ahead for her. Sabitha’s will power and sense of social responsibility are commendable. The parents had to assist her in all her daily personal needs but little did they realize that God would some day reward them for all their sacrifice and patience with this extraordinary news. Sabitha’s name and fame have spread all over the village and she is indeed the talk of the town now. Her disability has not dampened her spirits and she, with exemplary courage, attempts to do her own work by herself. She can even lift the phone and dial it with the help of only her feet. 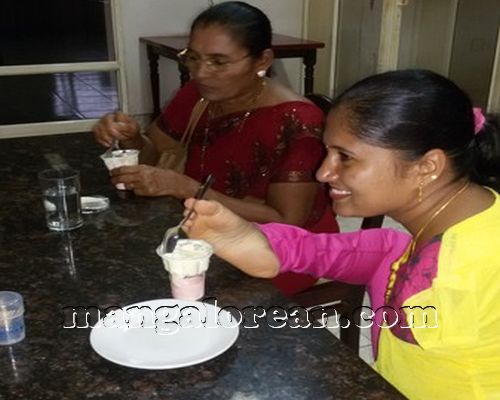 Recalling the days while growing as a special kid, Sabitha said, “There was not a single problem at my home as everyone supported me. But, at the time when I wanted to join the school none of them gave me admission in normal schools and instead suggested my parents to put me in a special school. With a lot of disappointment we had return home as we couldn’t go to Mangaluru to join special school. Though I was denied admission, I made sure to attend the Anganawadi school from morning till afternoon and later sat with I std students at a government school in my native. Once, it so happened that an officer came for an inspection and took the head master to a task for denying me the admission. Later, I was admitted to the same government school.” When asked what inspired her to start writing with her legs, she said, ” I don’t quite remember when I started to write with my legs. But, my parents say that at the time when my brother and sisters would be doing their homework even I started writing with my legs holding a chalk piece. I didn’t find it difficult at all. Even today I feel very comfortable to write with my legs and never felt I am any different compared to other children around me. For this, I am glad that my parents have helped me grow up to a level where I can take my own decisions and lead a decent life based on my own will and wish.”

When asked what she has to say about the help and concern from the government side towards specially-abled persons, Sabitha replied, “Unfortunately, though there have been many awareness programmes on the issue, still many of the specially-abled kids are not given the care they deserve. They have to be treated as any other normal kids with love and affection which inspires them to make the best of their lives and enter the mainstream society. The government is already providing them with free education. But it can do much more which actually helps the parents of these kids look after their children better. Teachers, who are in-charge of building the future of special kids must be provided with proper training and extended additional facilities, as they put in an extra effort to build the lives of these kids so that they get to enjoy a good professional life as they grow up.” 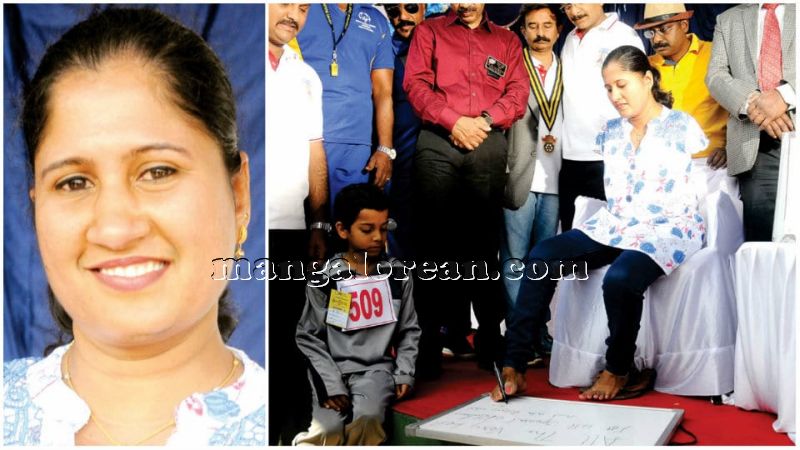 About her voting experience and the issues she faced, Sabitha said “Voting is our responsibility. If we choose to stay back on the day of the election, we may cause a bad politician to be elected. Voting is my right, I have been doing it without fail. Initially, I felt a little awkward to go to the polling station then, but not anymore. Over the years, I have voted couple of times. I am not happy with people who don’t go to exercise their franchise on polling day, especially those who are educated. What is the use of degrees, and being aware of issues, if people cannot make some time to go to polling stations. Please vote in the next elections”

So all you people who have the voting rights, take this message serious from Sabitha, and in the next- Karnataka Legislative Assembly elections or the Lok Sabha elections, exercise your franchise and pick the right candidate who can represent you, and also that you can hold them accountable. Kudos to this brave young woman!