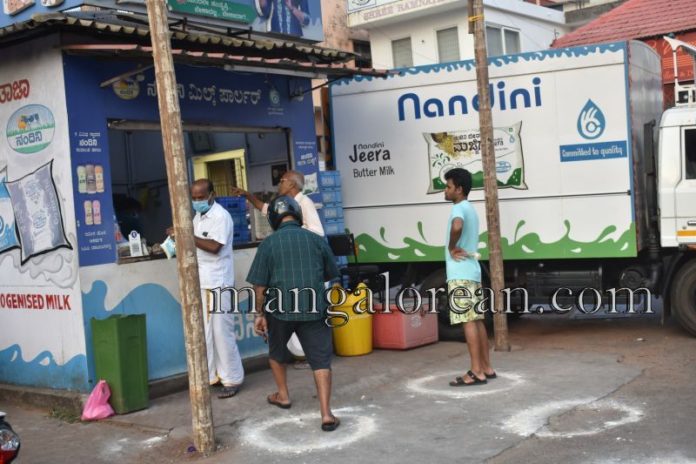 Mangaluru: TMangaluru: There is a lot of difference seen this morning, at least 98% from what it was yesterday, while people buying their groceries, milk and other essentials, after Team Mangalorean had published an article (REF:Finally, City’s Educated People Know the Meaning of SOCIAL DISTANCING during Covid-19 Scare ) on Wednesday, 25 March. Following the announcement made by Prime Minister Narendra Modi about a 21-day nationwide lockdown, and to help out the citizens of Mangaluru, the district administration and police commissioner advised the general public regarding the availability of essential services like groceries, milk, fuel, medicine etc. between the time of 6 am and 12 noon. Even though the DC and Police Commissioner had appealed to the public to avoid being in groups and maintain social distance, but it was all in vain yesterday, but there was a drastic change this morning, where our Citizens have finally adhered to the meaning of ‘SOCIAL DISTANCING’, and that’s a good sign to note. It could be better in the days to come.

Since yesterday, there has been a lot of confusion created by our Netas and other authorities, about the lockdown on Thursday. First to create fear among the people was MP Nalin Kumar Kateel, who said that Thursday would be a total shut down, where no shops/supermarkets will be open, and the needed essentials would be supplied at peoples’ doorsteps. Wow-what was our MP thinking? Supplying essentials to a few lakhs of people in Mangaluru – sounds totally impossible. What was he thinking, delivering Goli Baje and Ambade to a few apartments/houses? There were quite a few backlashes on his order, where Activist Gerard Towers had posted. “MP’s delivery of food/essentials will come only after nine years?”- and in response to Towers post, I posted mine stating, “I bet it will be little more than nine years, since he may intend to break his previous record? Anyways, MP’s plan was just a joke, which didn’t materialize. Thank God! 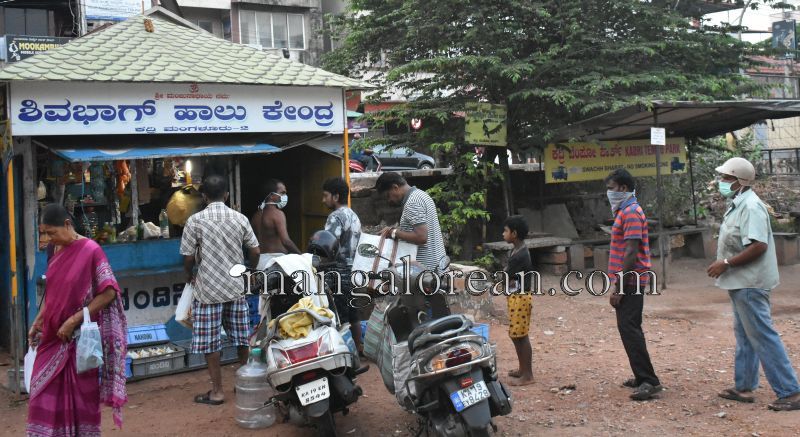 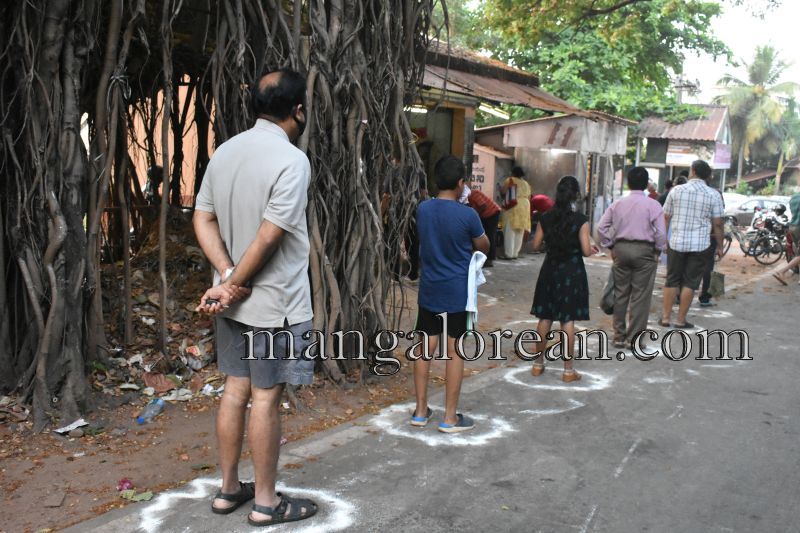 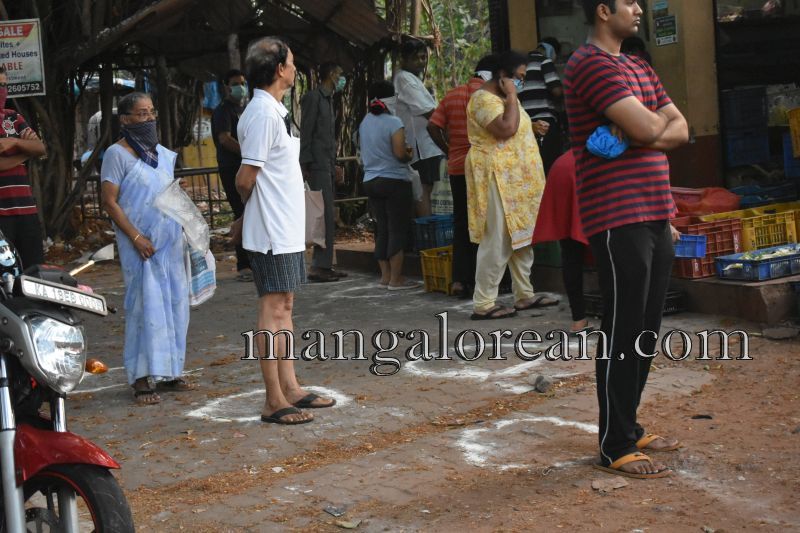 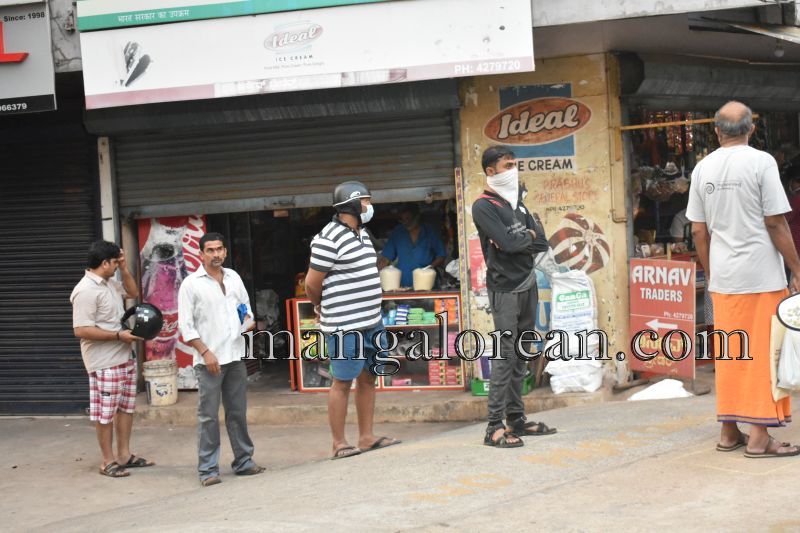 So with all the confusion, especially taking MP’s announcement seriously, many stores didn’t open for business. And those shops selling fruits and vegetables didn’t have a whole lot of items, since delivery of supplies was low, due to non-availability of transportation, and borders being closed. But it was nice to note, that near Kadri Market people were following Social Distancing in front of the Veggie/fruits shop, and even at the Nandini milk booth. Even medical stores saw a large queue, especially at City Drug House near City Hospital, but people kept a distance while in the queue. Quite different from what Team Mangalorean noticed yesterday morning. 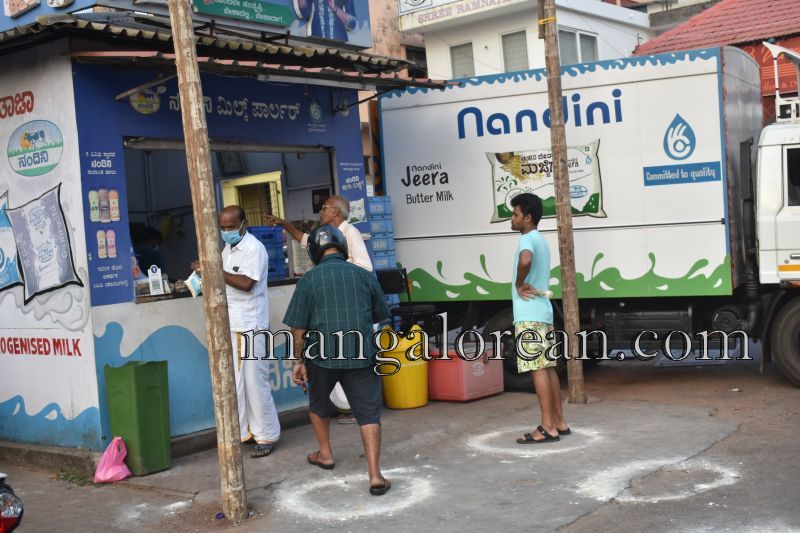 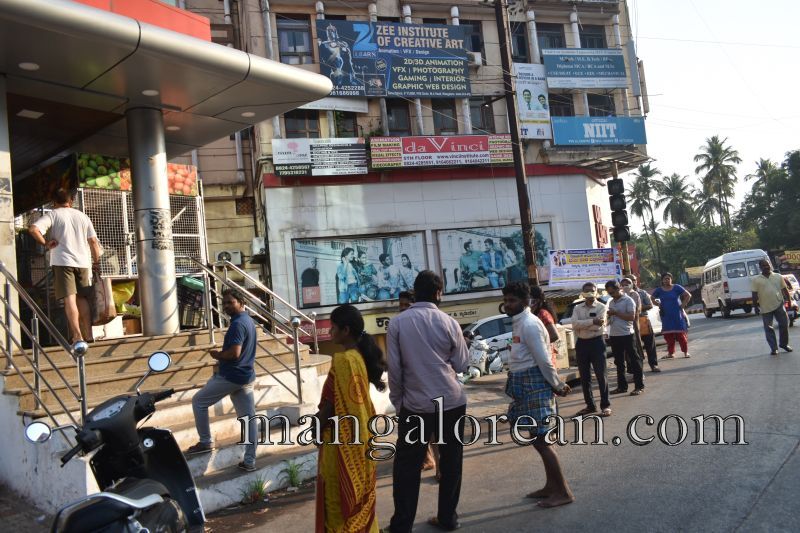 But like I said yesterday, there were no authorities from the district administration, nor there were cops to monitor what was going on- but I guess people used their common sense to follow the guidelines of the govt and administration, obeying the Social Distancing etc. Even though the prices of veggies and fruits had gone up, but consumers had no other choice to buy their essentials. That’s how traders make money when they get chances like these! The roads wore a deserted look, where only a few vehicles were seen moving around. Milk shops and grocery shops had a brisk business from 6 am- and there was a queue in front of medical shops. 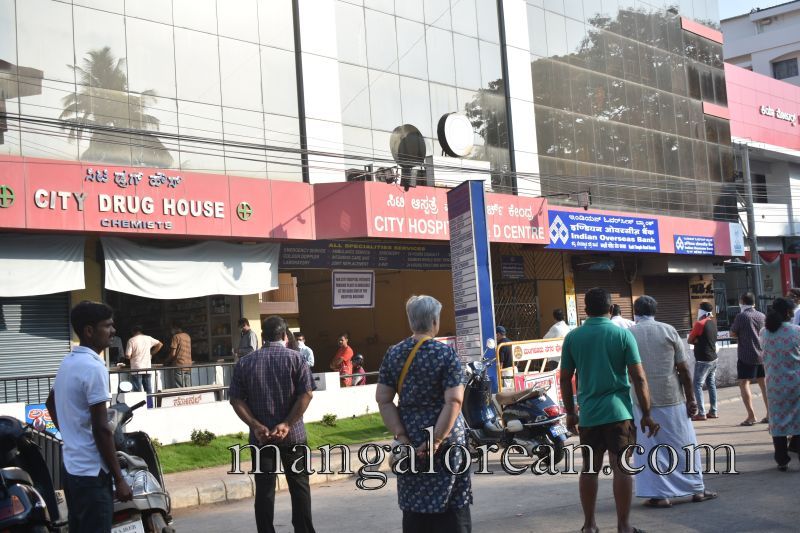 In conclusion, while Team Mangalorean has seen changes today in Citizens behaviour during this Coronavirus lockdown, I want to take back my word “Covidiots”, which I had mentioned in my last report while addressing them. Now that you all have admitted your fault and have made a difference today, please try to remain in the same manner, until the lockdown is lifted. However, there needs to be strict law enforcement to further secure the rights of safety for all. Inspirational messages/stories coming from the national icons will pace up the awareness, acceptance and action. It may be beneficial to point out how social distancing has offered everyone a time to relax, reflect, recognize and resurrect. Now that we have seen some changes as of today, Team Mangalorean makes a humble request to the District administration and Police Force, in order for people to strictly follow Social Distancing, there need to be more City Officials and Police on streets, to remind them of their violations if they did- so that the spread of Covid-19 is prevented. Mangaloreans, thanks -a-zillion, for making a difference!

PLEASE STAY AT HOME! Then why are Bunch of ignorant People still on Streets in Mangaluru

With all this Prolonged Lock Down, Beggars & Stray Dogs in City will NOT Die of Covid-19 but of Starvation?