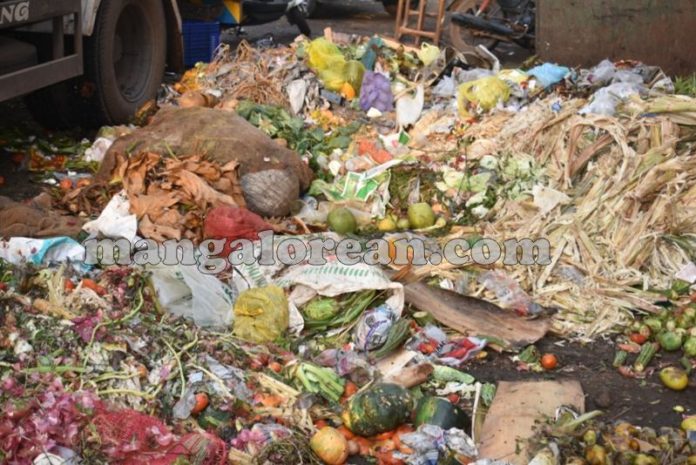 From ‘Waste’ For Your ‘Taste’? Street Vendors Pick & Resell Vegetables from Waste near Central Market

Mangaluru : While you drive or walk along the street the Market Road, you will be greeted by a few women and men, hailing from Tamil Nadu and Kerala, running their street vending business selling vegetables, which the consumers buy in a hurry, thinking it’s as good price, since any vegetable item is ONLY RS 10? Okay, Rs 10 sounds real good when compare to the price that you pay at the regular vegetable shop. But do these buyers know, where these vegetables come from, to sell them at such a dirt cheap price. Do you want to know from where? FROM GARBAGE??

Every single day, the wholesale dealers at the Central Vegetable market discard huge quantity of vegetables, either which are damaged during transportation, or which are not fit for sale. Since earlier when the garbage truck of Antony Waste used to come early to pick up the waste, the veg dealers used to dump all the waste vegetables into the truck- but now since the trucks don’t make regular trips in time, the wholesale dealers have no other choice than to dump the stale veggies on side of the road, adjacent to a cinema theatre. And this is where these street vendors start to dig into the garbage early in the morning, and sort out the good vegetables from the bad ones, and resell by the side of the road in the later hours. 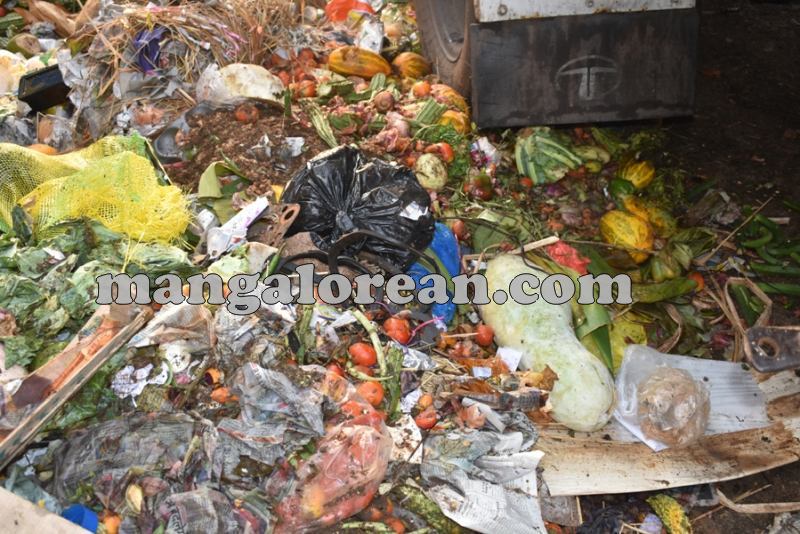 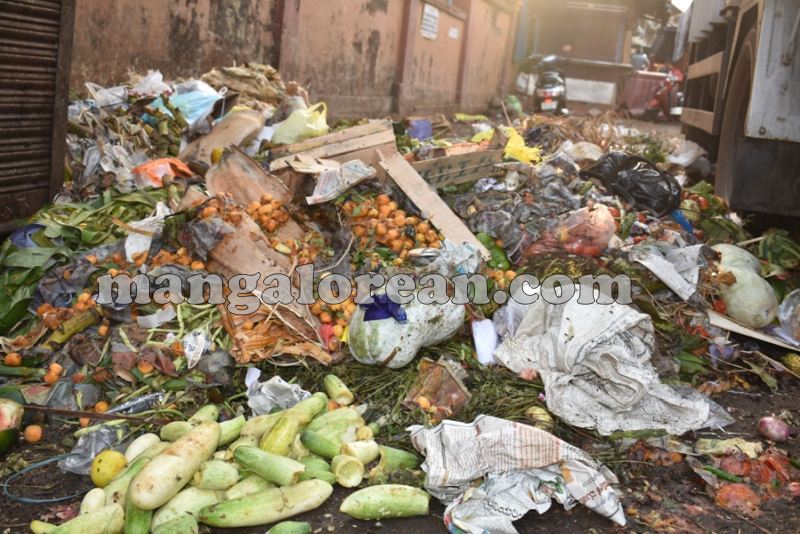 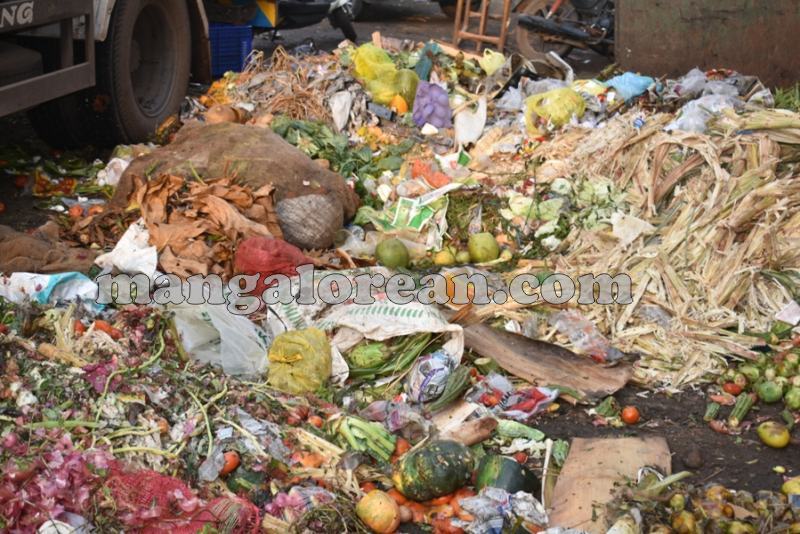 Yes, you can these street vendors also as Rag pickers, who work without any job security, salary and dignity and are also exposed to adverse health effects like infections, respiratory diseases and tuberculosis. But while taking pity on these rag pickers aka street vendors, the consumers also need to worry about their health issues spread from consuming these vegetables picked from the garbage. Yes, we know to earn their daily bread, these Rag pickers sustain themselves by collecting, sorting waste and then trading it. But when it comes to Swachh Mangaluru, in doing so, they help clean up a significant proportion of the tonnes of waste generated in the City. While doing their sorting job, they are regularly exposed to cuts, infections, respiratory diseases and tuberculosis apart from poverty, humiliation, harassment, and sexual abuse on the streets.

These men and women leave their homes early morning with their waste carts. A few of them work where the municipal corporation deposits waste, some scour the roads and others go to specific neighbourhoods looking for things they can find, to resell, of which are vegetables too. These women work independently, and when Team Mangalorean spoke to one Tamilian lady she agreed that they had tried their hand at other things but came back to rag-picking because it paid better.
Many a times, their husbands and children go for picking/sorting of waste, while women do not go out for picking, but do sorting of waste at home. 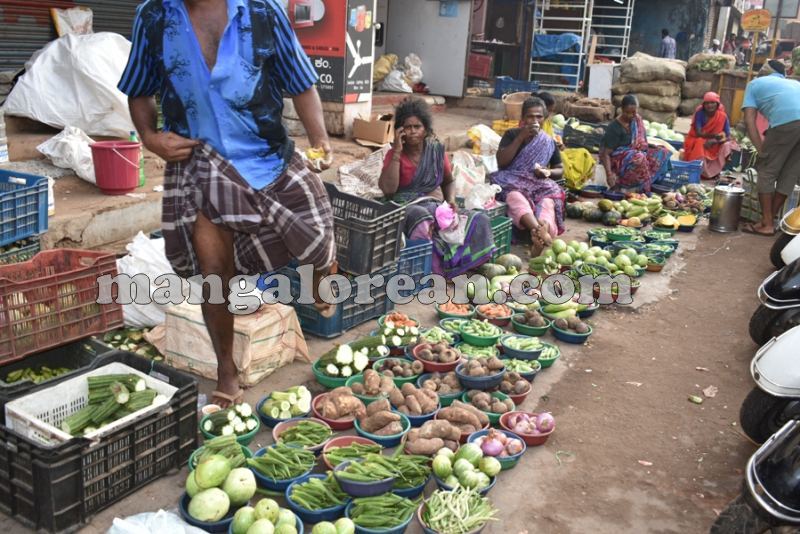 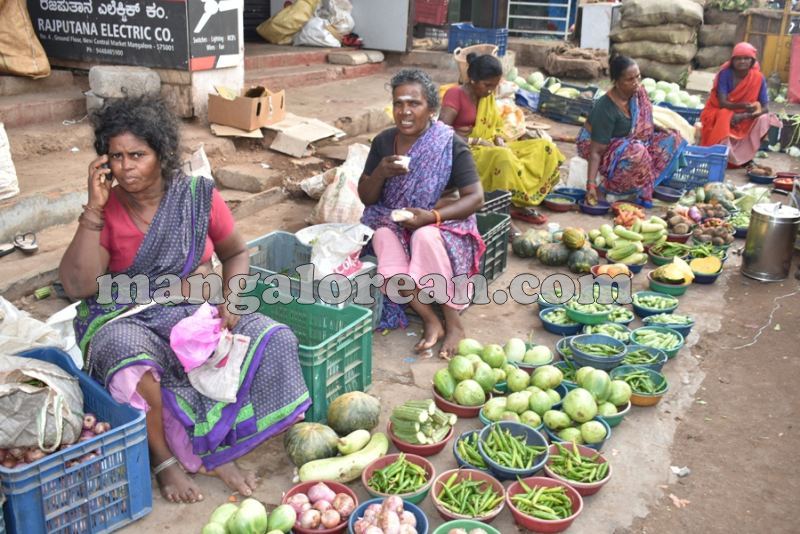 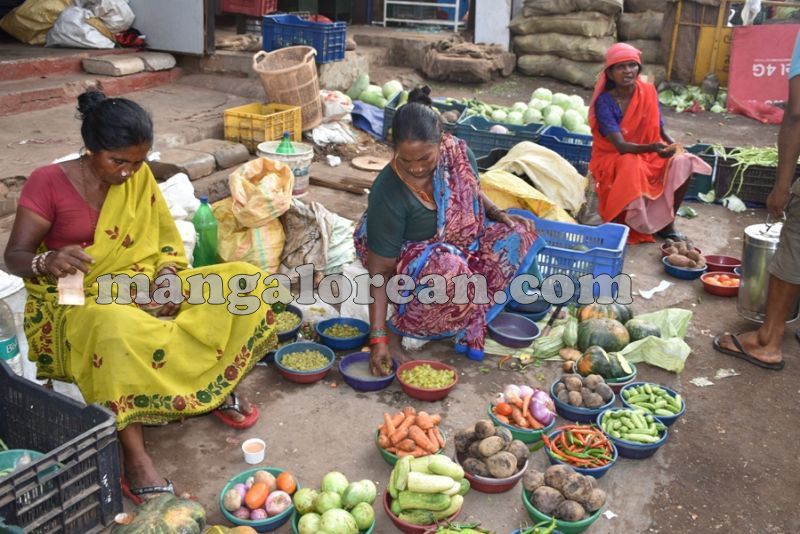 ……. TO HERE TO SELL?
But whatever be the case, we are taking about vegetables that are sold to the public from the rotten and stinking waste, and put up for sale, which is nothing but a hazardous health issue. Imagine cockroaches, rats and other stray animals feeding on the waste, and thereafter these street vendors pick the left over good vegetables from the waste and sell it to the public. Some of these rats might have survived from the rat poison, and now feeding on this waste. One street vending woman said that she makes good money by supplying these vegetables to a few paying Guest hostels in the City, and also to some small scale restaurants. How about the safety issues, of the inmates at the hostel, and the customers dining at these restaurants.

What is the city administration doing in this regard? Why is our MCC Health Officer Dr Manjayya Shetty not waking up to take action? How about the District Health Administration? Are they all waiting for citizens to get sick consuming these vegetables picked from the garbage, and also stale vegetables sold to them by the wholesale dealers for cheap. If you think Rs 10 is a very good bargain to buy each of these by the road side, but think further about the health consequences these vegetables may bring to you once they enter your body system. Only hope the concerned officials will look into this situation, and see that no vegetables are sold picked from the Waste?

All these officials go to places where they get good money. Why the authorities allow these vendors to put stalls on the roadside while that area is supposed to be parking places. Also the corporation could use that effectively by converting these into paid parking instead of theae hawkers occupying the whole place and causing chaos for traffic and pedestrians.