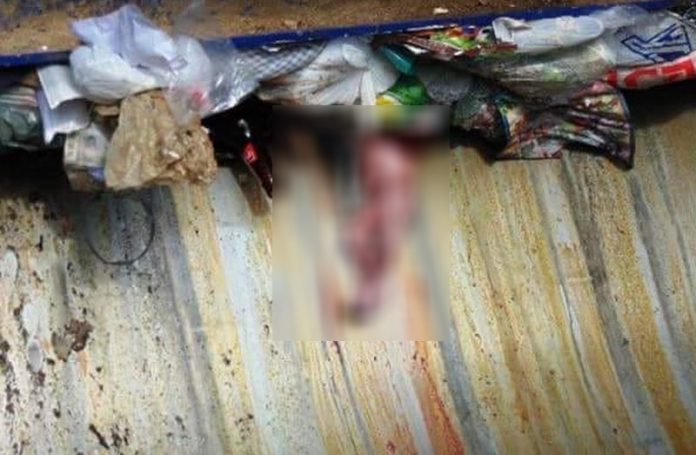 Garbage Bin Babies! Why Indian Parents are Dumping Babies in Dumpsters? Can the European concept of “Baby Hatches” help solve this issue in India/Karnataka or may be Dakshina Kannada?

Mangaluru: I was shocked to see two pictures sent to me by Ms Corrine Rasquinha- the Founder of “White Doves” – an NGO which takes care of the homeless and the destitute- the pictures show a new born baby protruding out of the hydraulic rear end of a garbage truck- although the identity of the photo is not know as to where the photo was taken- but wherever it happened, however, how could anyone throw a new born baby into a dumpster. But sadly, it seems like people do it-not only in India, but also in other countries.

We read news about newborn babies being abandoned in India, especially thousands of baby girls are abandoned each year, an extension of sex selection practices that, according to a recent survey, including half a million abortions in India every year. Most abandoned babies die, but a few are rescued. While the statistics on the number of babies killed or abandoned at birth are murky — the vast majority go unreported — the radically skewed sex ratio of children under six years of age is an inescapable indication.

Sources reveal that the abandonment of babies is not just a third-world problem. Although with less severity, developed nations — such as the U.S., UK, and several European countries — are also facing the issue. As in India, babies have been found abandoned in a variety of places: on roadsides and in alleyways, outside temples and churches, in shopping malls and public bathrooms, and inside garbage cans. It must be a heart-wrenching decision to abandon one’s baby. One can only imagine the desperate conditions that would lead a parent to do so. The reasons for abandonment may be varied: an unwed mother facing intense social stigma; parents unable to look after their child, often because it is mentally or physically ill; or, as often is the case in India, simply not wanting a girl.

Speaking to Team Mangalorean, Ms Corrine Rasquinha said, “When we allow an innocent Child to become throwaway garbage and then welcome it as ‘Freedom and Choice’… then the Elites’ Agenda for Humanity is nearing completion. Every life is precious. The Bible says” Every child is a gift of God, a real blessing”. I strongly believe this. I know the pain of being childless for five years. There are many childless couples longing to receive this blessing from God and for them male or female child doesn’t matter. On the other hand pregnancy out of wedlock and poverty leads women to get rid of their babies in the most cruel manner. “

“Today the lifestyle of people in the cities has changed for the worse. They have lost the sense of sin living immoral lives. Human beings become selfish thinking only of themselves. There are exceptions. The rich go in for secret abortions. Why punish an innocent life for no crime of his/hers. Mistakes do happen then don’t pay for the mistake with another mistake rather another crime. There is a grave need to have a centre in Mangaluru where women and girls can stay for the time of confinement with utmost secrecy and there has to be a place where people can drop off their unwanted babies instead of killing them. I gave a serious thought to this as I come across many such cases. Mangaluru doesn’t have an adoption center. I was offered to start one. But was discouraged by doctors and friends saying I would have to face many accusations. I was ready for challenges but then I have my plate full already. Save precious lives, start a Centre in Mangaluru to save precious lives.” added Corinne.

Well said by Madam Corinne. When there are quite a few NGO centres in Mangaluru who take care of destitute, homeless, old-age people, Aids affected persons, Alzheimer’s/Dementia patients and many others, why not the government or the district administration open a NGO where parents who want to give their babies {for their personal reasons} can drop them at these centres, rather kill them by dropping the babies on roadside or into dumpsters. But browsing through Internet, sources revealed that the underlying causes of the crisis, deeply rooted in Indian society, will not be easy or quick to remedy. However, in the meantime, there’s at least one good idea out there for addressing this urgent problem: “Baby Hatches”. It’s not a permanent solution, but it could be a temporary stopgap. This concept is working well in many European countries.

A Baby Hatch is basically a safe place — maybe a crib or a room, often attached to a health center — where a parent can leave their child without fear of prosecution. These children are then looked after by the government and, if possible, placed with an adoptive family. There is a special term for such children — not orphans because they have living parents, but foundlings: they have been found. Since the 18th century, variations of the baby hatch concept have existed in much of central Europe, where they have sometimes been called “foundling wheels”.

Many American states now have “safe haven” laws, designated safe drop-off locations where parents can leave unwanted babies. These are usually hospitals, police stations, or fire stations. In France, a woman is allowed to deliver her baby in a hospital and, if she doesn’t want to keep it, leave it behind — no questions asked. Many countries have set up their own systems of baby hatches: Italy, Hungary, Poland, Russia, Japan, the Philippines, and South Africa, to name a few. Canada installed its first baby hatch at a hospital in Vancouver.

Einsiedeln, a small town in Switzerland, has had a baby hatch for ten years, and even though they’ve received only two babies in that time, they still feel it worthwhile to keep it open. As the Economist reports, “Now Germany has around 200 places where a mother can either leave her baby — heated ‘baby hatches’, usually with an alarm to summon a carer — or where she can give birth anonymously.” In Pakistan, the Edhi Foundation accepts abandoned babies at its numerous welfare centers throughout the country. In China some officials are testing what they call “safe islands for babies” and Australia is considering its own safe-haven law.

Since 2007, the idea of a baby hatch has been slowly resurrected in India. There are already some baby hatches operating in India, in the state of Tamil Nadu. A United Nations Population Fund report explains, “Instead of resorting to female infanticide, parents who were unwilling to bring up their female babies could place them anonymously in cradles located in noon meal centres, PHCs, selected orphanages and NGOs. Subsequent to their placement in cradles, babies were to be placed for adoption.” Since the program’s inception in 1992 in selected districts, some 390 boys and 2400 girls have been safely left, according to the Tamil Nadu government’s directorate of social welfare.

Using the model and experience of the work already done in Tamil Nadu, India could set up a nation-wide system of baby hatches. Of course, key pre-requisites for a baby hatch system to work is that women must know that such safe places exist, where these places are, and that no questions will be asked. Critics of baby hatches argue that it could create more problems than it solves. First and foremost, they say it will increase abandonment. This may well happen. However, that’s not a reason to not have such safe havens. That would be like saying we shouldn’t allow divorce because that would increase the divorce rate. If parents who really want to abandon their children are keeping them simply because there is no safe haven, imagine the care these children must be receiving. Forcing parents to keep unwanted children can lead to abuse and infanticide.

Some also worry that it will result in more children for the public to look after. To manage this situation, India can increase child-care facilities and ease adoption laws and procedures to make the process faster and more efficient, enabling the adoption of more children. Some government departments are already planning to do the latter. This problem may actually turn out to be a boon for the lengthy queues of aspiring parents wishing to adopt. It is learnt that Die-hard critics argue that the system of baby hatches contradicts the UN Convention on the Rights of the Child: that the child has the right to know its identity. Abandoned children would likely not know their parentage. However, children safely abandoned in baby hatches would at least survive.

While newspaper stories — and even actor and filmmaker Aamir Khan’s new reality show on social issues (the opening episode discussing female foeticide) — accomplish the critical first step of highlighting the issue of baby abandonment, acting on the problem is the second step. A nation-wide system of baby hatches could be a real life-saver. It’s time that politicians, activists, NGO administrators and other like-minded people come forward and think of a real good solution as to how they can save new born babies being abandoned, resulting in deaths. “Baby Hatches” would really be an good concept and a good option to save such abandoned babies.