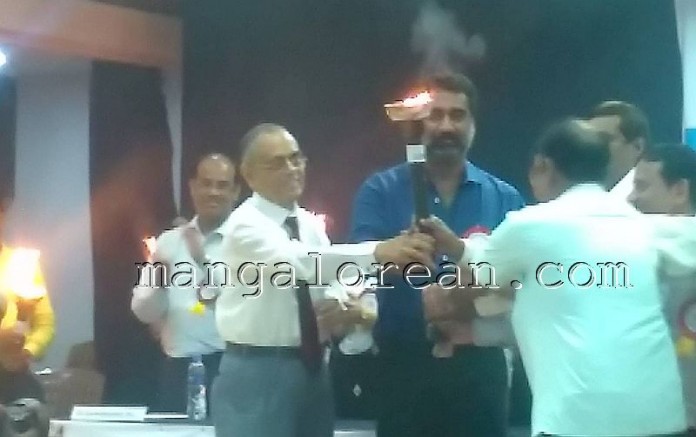 Mangaluru: IMA Karnataka state president speaking on the occasion of the launch of the Karnataka leg of Bharat Yatra at IMA house called upon the government not to go ahead with implementation of National Medical Commission (NMC) bill  which creates bridge course for AYUSH doctors which deprives the public of benefit of Indian System of medicine which has a long history.

The public will be guinea pigs of doctors who lack expertise in either system of medicine, In a hurry to provide rural healthcare government wants to experiment with the health rural public at the hands of trainee doctors.

He highlighted the greater danger of corruption to set in a nominated pattern of NMC at a multitude of levels with the current draft.

He also called upon the younger genre of doctors to introspect and emulate the ideals of seniors, to reciprocate for social causes of the public.

Handing of the Bharat Yatra Jyoti to the other parts of the states was done at the ceremony which will culminate at New Delhi with the Mahapanchayath of doctors on 25 Mar 2018 which will have an attendance of 20,000 doctors.

Later a Cycle, Bike rally was flagged by Dr Ravindra to the DC office and a memorandum of demands to prime minister Narendra Modi was submitted asking to withhold the NMC bill.

The Rally was well attended by doctors and medical students of the district and state.