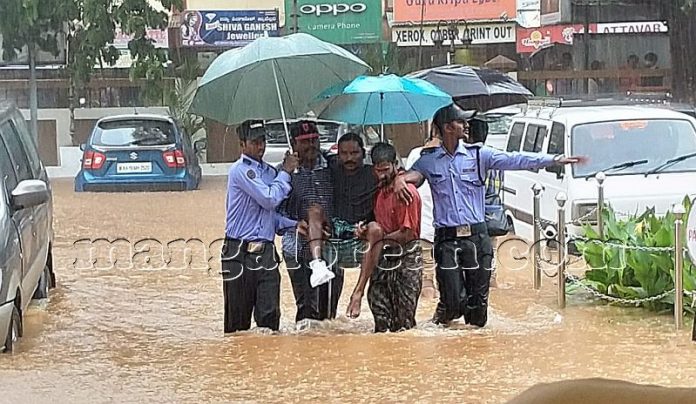 Mangaluru: With the rains coming down on the City for the last three to four days, proved the weatherman right this time, when the Meteorological Centre in Bengaluru had predicted heavy thunderstorms starting from 26 May to 29 May. It’s time to sing the song by B J Thomas, with his song lyrics “Raindrops keep fallin’ on my head..Nothin’ seems to fit..Those raindrops are fallin’..On my head, they keep fallin’..So I just did me some talkin’ to the sun And I said, I didn’t like…The way he got things done..Those raindrops are fallin’..On my head, they keep fallin’..I’m never gonna stop the rain by complaining”.

Oh well, the proverb “March winds and April showers bring forth May flowers”, or the shorter, trochaic version “April showers bring May flowers” are common expressions in English speaking countries. Whatever the versions are, monsoon seemed like it came little earlier than the expected time when we expect heavy rains starting during June/July months. But that’s okay to have cool rains than scorching summer temperatures we had a few weeks ago. Temperatures in City dropped by almost 10-20 degree Celsius in a span of 2-3 days as the city witnessed a drastic change in weather. Weather in the city changed from being scorching hot till afternoon to thunderstorms towards the evening, caused by sudden rainfall accompanied with high-speed winds up to 40-kilometre per hour. However, thanks to sudden rains which has brought some relief to hot and humid temperatures.

Since the past few days, temperatures in the city were being recorded low when compared to earlier ones- However, thanks to the drastic change in weather and fall in temperatures, city folks ventured out of their homes and offices to enjoy the pleasant change in weather during the weekend. But due to heavy rains in certain parts of the City, rains threw life out of gear, since commuters to wade through knee-high water stranded at areas due to the overflow of drainage- and also that children were back to school yesterday had to face all these consequences too. But you can’t blame the mother nature- we all need rains sooner or later-if are not we all ready to face water shortage?

Even as it is raining outside while I am drafting this report, but since last couple of days heavy thunderstorms and lightning had filled the sky. A few days ago, Citizens getting out of work had to feel all the inconveniences, since many were not ready for the rain. Not many had umbrellas nor raincoats. This rain did surprise citizens of Mangaluru, while I heard few saying “It’s really surprising to see such a heavy downfall in May, others complained, “Probably it rained due to Global Warming? or probably it was the curse of God? However, it is noted that the pre-monsoon is expected sometime in the end of May month followed by South West monsoons in the first week of June.

Yes, let’s be happy that at least this drizzle gave us some respite from the dryness the city had endured for over last few months. However the Roads and streets in the city are filled with rainwater, and many drains are seen overflowing- blame it on the shabby work of MCC, which they recently undertook laying new drainage. Among the people who are not happy with this rain are the street vendors, who have to bear the brunt of the downpour, trying to shelter themselves under a temporary umbrella or a make-shift roof. The heavy downpour did wet the items which some of the street vendors were selling around the various parts of the city.. Some commuters who have the habit of carrying umbrellas to protect themselves from blazing hot sun had to now make use of them to protect from getting wet from the rain.

At some places children were seen enjoying the rain, getting soaked in the water. Also due to heavy winds and rains, there has also been an interruption in power and due to this power interruptions, people have to bear with the consequences. After all you cant stop the act of Mother Nature! The forecast for the next 24-48 hours says rain/thundershowers would occur at most places over Coastal Karnataka and at many places over interior Karnataka. But you can’t always rely on the weatherman -it could rain or it could be sunny. Until then let’s keep our fingers crossed, and hope for sunny bright days ahead. With rain God casting his spell on all of us, it’s once again time to dust off those rain jackets/coats from the closet and look for your umbrellas-because according to weatherman more rain is expected in the hours/days to come. Happy Monsoon Days ahead!

Due to heavy rains, KMC Hospital Attavar and surrounding areas have flooded. The hospital premises, including the vehicle parking area of the hospital, has flooded making it difficult for the ambulances to bring patients to the hospital. The entrance gates of the hospital are filled with over 2 feet of water in some places. A patient was seen being carried into the hospital to the casualty by security personnel from the main gate. Due to the flooding, movement of vehicles on the main road has also become difficult and a number of vehicles have stalled with water entering the engine compartment. The fire service has been stationed in front of the hospital and fire tenders are helping road users to reach their homes as all the lanes in the area are flooded.