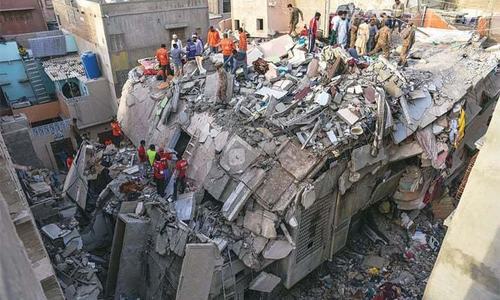 Karachi:  Rescue services have recovered eight more bodies from the rubble of a building that collapsed in Karachi last week, taking the death toll to 27.

The residential building in Gulbahar area had collapsed on March 5 on two adjacent structures, bringing them to the ground as well, killing 14 people and injuring at least 17 others on the spot, reports Dawn news.

Since then, bodies of multiple victims have been retrieved from the debris. While a boy was pulled out alive from the rubble on Saturday, the eight more bodies were retrieved on Sunday.

It took four days for the debris to be removed completely.

An rescue official explained that the area was congested so more heavy machinery could not be brought in to help with rescue efforts.

A rescue team of the Pakistan Army had cordoned off the area while the operation was underway.

According to rescue services, seven victims belong to the same family.

Meanwhile, a three-member committee which has been formed to probe the collapse will start its investigation on Monday, a source told Dawn news.

The body has been directed to submit its findings by March 12.

A day after the incident, a case was registered against the building owner.