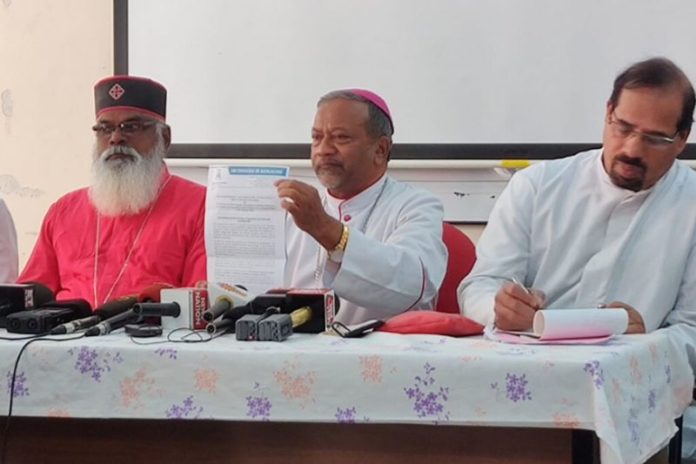 Bengaluru( CNN-News18): The Archdiocese of Bengaluru and the All Karnataka United Christian Forum for Human Rights on Thursday broke their silence on the church’s stand on the contentious Citizen Amendment Act (CAA). The church openly opposed the implementation of the legislation, saying it would polarise people along religious lines.

Archbishop of Bengaluru Rev Peter Machado submitted a memorandum to Prime Minister Narendra Modi, President Ram Nath Kovind, and Karnataka Governor Vajubhai Vala against the implementation of the CAA and the National Register of Citizens (NRC).

Machado urged the Centre to grant citizenship to illegal immigrants not on religious lines but on the merit of individual case.

“Let religion not be made the criteria for citizenship. Let’s not spoil India’s image of unity in diversity. Don’t isolate a religion or community. We are not targeted now but we could be in future. We are also a minority, could happen to any of us,” wrote the reverend, representing various denominations of the church, including the Church of South India (CSI), Methodists and others.

When asked why the church was opposing the CAA even though Christians are among the six religious communities that can apply for citizenship, Machado reiterated they would like to stand with the Muslim community and, as minorities, put up a “united front”.

Explaining why he had not spoken out earlier against the act, Machado said there was a lot of confusion about its specifics, which had prevented him from commenting on it and adding to the confusion.

“Since many people in Karnataka were asking for the church’s stand on the matter, we collectively took a decision to speak about it now,” he said.

Saying that violence is not the solution when there is a difference of opinion, Machado urged the government to engage in dialogue with those opposing the act.

The letter said “there is no harm in backtracking: changing course if it is necessary for the good of the country”.

This comes on the back of a statement made by Union Home Minister Amit Shah that “the government would not go back an inch to revoke CAA”.