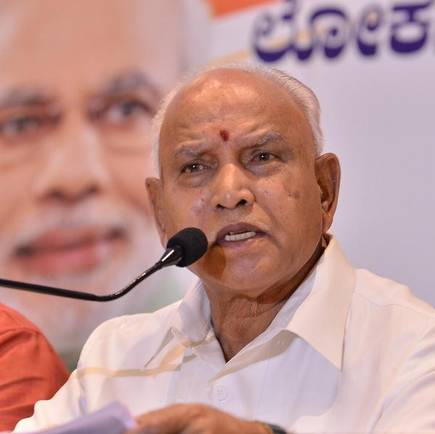 Bengaluru: Karnataka Chief Minister and veteran BJP leader B S Yediyurappa turned 78 on Thursday with Prime Minister Narendra Modi and a host of leaders greeting him.

Modi hailed Yediyurappa as a “hardworking” chief minister and wished him long life and good health, while several state leaders flocked to his residence and greeted the Lingayat strongman.

“Birthday greetings to Karnataka’s hardworking CM @BSYBJP Ji. He is passionately working for the state’s progress, especially on farmer welfare and rural development.

I pray for his long life and good health,” the Prime Minister tweeted.

A large-scale “non-partisan” birthday bash will be held here later in the evening.

BJP National General Secretary (Organisation) B L Santosh and state party chief Nalin Kumar Kateel are among those who will be gracing the event.

While Santosh will release a felicitation volume in Kannada with 78 articles from a cross-section of people, including politicians, writers, bureaucrats, and spiritual leaders; Siddaramaiah and Kumaraswamy will unveil a coffee table book and documentary respectively.

Yediyurappa, on the eve of his birthday on Wednesday, had said whatever he has achieved is a result of the people’s “blessings and faith” and requested well-wishers not to bring bouquets, flowers, shawls, sweets, turbans or any souvenirs to greet him.

The birthday function organised by “Yediyurappa Abhinandana Samiti” (Yediyurappa Felicitation Committee) is being seen in some quarters as an attempt by Yediyurappa and his loyalists to send a message to the party leadership that he was still “strong”.

The BJP’s current dispensation under Narendra Modi and Amit Shah has retired several senior party leaders who crossed the age of 75.

However, an exception was said to have been made in Yediyurappa’s case after the BJP won 25 of 28 seats in the Lok Sabha election under his leadership.

In the 2018 elections, he spearheaded the campaign of the BJP which emerged as the single largest party but fell short of the majority mark following which Congress and JD(S) came to power stitching a post-poll pact.

However, the coalition collapsed in July last year, paving the way for return of Yediyurappa as Chief Minister for the fourth time.

Amid speculations about his continuance as Chief Minister, considering his age, the Lingayat strongman in the recent past had expressed confidence of completing his full term and even leading the party in the next elections, due in 2023.