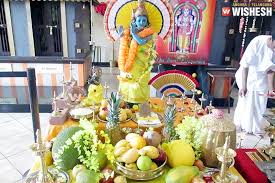 Thiruvananthapuram: Hindus across Kerala on Monday celebrated ‘Vishu’ or the traditional new year, marking the arrival of good luck and fortune.

Ahead of the main festival, women in the Hindu households prepare the ‘Vishukani darshan’ the previous night which is a traditional arrangement of their favourite deity, to be viewed the first thing in the morning.

A special vessel called the ‘urali’ that consists of fresh produces including cucumber, pumpkin, coconut, plantains, mangos, pineapples, rice, grains and the areca nut, is kept in front of the idols.

Elders first view the ‘Vishukani’, after which they wake up others in the house, who are all brought for the ‘darshan’ with their eyes closed.

Another important event of the day is the giving away of ‘vishukaineetam’ (gift) which is mostly coins.

Following this and a quick visit to the temple, the entire household gets ready for the traditional Vishu lunch, which is a 26 course vegetarian meal served on a banana leaf.

In the southern and central districts of the state, this is a pure vegetarian meal, but in the northern districts, the lunch consists of non-vegetarian items also.

Hindus constitute more than 50 per cent of the of the 33 million Kerala population.