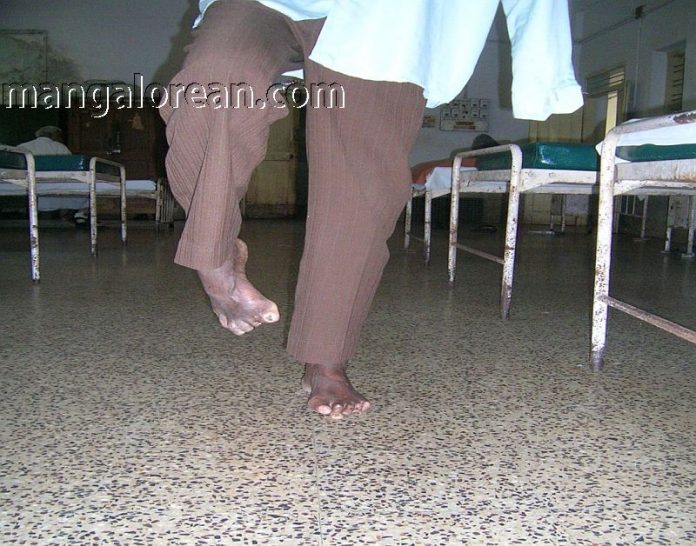 History: Leprosy is the oldest infection known to mankind. India considered as the point of origin of leprosy.

Leprosy is a chronic systemic disease caused by Mycobacterium leprae manifesting as the development of specific lesions in the skin, mucous membrane, eyes nerves, bones and body organs.
It occurs in all age groups. The peak age of onset: Between 20-30 years. Males > Females (M:F: 2:1) (male predominance seen in adults, in children gender distribution is nearly equal). Less common in children and women. The occurrence of the disease depends on the immune status. Overcrowding, lack of personal hygiene, humidity favour disease transmission.

Leprosy is a disease caused by a type of bacteria called Mycobacterium leprae. These bacteria attack nerves in the hands, feet and face, causing numbness and loss of sensation in those parts of the body. It can also affect the nose and the eyes. Early signs include discolouration or light patches on the skin with loss of sensation. When nerves in the arm are affected, part of the hand becomes numb and small muscles become paralysed, leading to curling of the fingers and thumb. When leprosy attacks nerves in the legs, it interrupts communication of sensation to the feet. As a result, the person does not feel pain and can have injuries to their hands and feet without realizing it. The damaged nerves also lead to the skin peeling off, and the tissue beneath the skin is exposed. The signs and symptoms vary considerably, depending on the patient’s resistance to the disease. They can be easily missed or mistaken for some other disease.

What are the signs and symptoms of leprosy?

Leprosy should be suspected if a person shows the following signs and symptoms:

● dark-skinned people might have light patches on the skin, while pale-skinned people have darker or reddish patches.
● loss or decrease of sensation in the skin patch.
● numbness or tingling in the hand or feet.
● weakness of the hands, feet or eyelids.
● painful or tender nerves.
● swelling or lumps in the face or earlobes.
● painless wounds or burns on the hands or feet.

How does leprosy spread?

Humans are the only significant reservoirs. The disease is believed to be spread through droplets from the nose or mouth of a patient to the skin and respiratory tract of another person. Transmission requires close and frequent prolonged contact with untreated, infected person. Indirect transmission is very unlikely. The bacteria multiply very slowly and therefore leprosy is not highly infectious. About 95% of people have natural immunity against leprosy.

Are there different kinds of leprosy?

Yes. It depends on a person’s resistance to the disease, not the type of germ or bacteria. There is only one type of leprosy germ, but people react to it in different ways. Most people resist leprosy so well that they will never develop clinical signs even if exposed to active cases for long periods. There are two types of clinical manifestations depending upon individual immunity levels. If a person has no resistance, the germ multiplies freely in the skin, the lining of the nose and even in deep organs such as the liver. This is lepromatous, or multibacillary leprosy. Other types, including tuberculoid, borderline, indeterminate and polyneuritic leprosy, are made up of just a few bacilli. These are known as paucibacillary leprosy.

How are leprosy cases classified?

The classification of cases depends upon the number of patches/skin lesions. One to five patches or lesions on the skin is classified as paucibacillary leprosy, while more than five patches or lesions is called multibacillary leprosy. A trained health worker is capable of differentiating between the two types of leprosy and treating them accordingly.

What is the incubation period?

This ranges from 9 months to 20 years. The average is about 4–5 years for tuberculoid leprosy (one or two well-defined lesions), and twice that for lepromatous leprosy (numerous flat or raised, poorly-defined shiny, smooth, symmetrically distributed lesions). However, cases have been identified in children aged less than 1-year-old.

How is the clinical diagnosis of leprosy made?

Clinical diagnosis is based on complete skin examination. Doctors also check for the sensitivity of patches in the skin.

What is the laboratory criterion for the diagnosis of leprosy?

Laboratory criteria include the presence of alcoholacid-fast bacilli in skin smears (scrap-incision method). In practice, laboratories are not essential for the diagnosis of leprosy.

Can leprosy be cured?

Yes, leprosy can definitely be cured. Highly effective and safe drugs for the treatment of leprosy are now available for free at most health centres, including those in remote areas.

Do fingers and toes fall off when someone gets leprosy?

No. The bacillus attacks nerve endings and destroys the body’s ability to feel pain and injury. Without feeling pain, people injure themselves on fire, thorns, rocks, even hot coffee cups. These injuries become infected and result in tissue loss. Fingers and toes become shortened and deformed as the bone is absorbed.

Should a person affected by leprosy be sent to a leprosy sanatorium?

There is no need to treat leprosy patients in special clinics or hospitals. In many countries, leprosaria (leprosy sanatoriums) have been transformed into general hospitals or other functions. A leprosy-affected person can and should be treated in any health care centre together with people suffering from other diseases.

Can leprosy be passed on from parents to children?

No, leprosy is not a hereditary disease. Most people affected by leprosy do not have other family members affected by the disease.

Can I live with a person affected by leprosy?

Yes, you can live with a person affected by leprosy because it is not highly infectious. You should, however, help them to seek health care. You should make sure they take proper medication and follow the treatment and care as per the advice of a health worker. People affected by leprosy should not be isolated or segregated from their family and community. They can take part in social events and got to work or school as normal.

Can we share household items such as spoons, plates, a bathroom or a bedroom with a person affected by leprosy?

Yes. Household items, bathrooms and bedrooms can be shared with a person affected by leprosy.

Can a person affected by leprosy get married?

Yes, a person affected by leprosy can lead a normal married life and have children.

Can people affected by leprosy be employed?

Yes, a person affected by leprosy is not a threat to fellow citizens/colleagues if he/she is taking or has completed the treatment.

Yes. In general, men are more likely to be affected by leprosy than women, for reasons that are not clearly understood. In many societies, discrimination against women based on sociocultural norms often put women at a disadvantage, which limits their access to health care services, decision-making power and to opportunities across all spheres of life.

Is it necessary to examine those in contact with a person affected by leprosy?

Those who live with a person affected by leprosy are at increased risk of getting the disease. Therefore, it important to have people living in the same household and close friends examined regularly for leprosy. At the same time, they should also be educated regarding the signs and symptoms of leprosy as well as the type of help they can give to the leprosy patient living with them.

What is the treatment for leprosy?

The treatment for leprosy is called multidrug therapy (MDT). It is a combination of drugs depending upon the type of leprosy. Studies show that MDT is highly effective against leprosy and has minimal side-effects.

No. The treatment lasts between 6–12 months, depending on the type of disease.

How long does it take for skin discolouration to disappear?

Skin discolouration normally starts to diminish soon after discontinuation of MDT and the skin should become fully normal within a year.

What is “leprosy reaction”?

Leprosy reaction is the sudden appearance of symptoms and signs of inflammation in the skin of a person with leprosy in the forms of redness, swelling, pain, and sometimes tenderness of the skin lesion. New skin lesions can also appear. There may also be swelling, pain and tenderness of nerves which often results in loss of function. Leprosy reaction can occur before, during and after completion of treatment.

How can I help to reduce the social stigma?

You can do the following:

Can leprosy be prevented?

Yes. The effective way for prevention of the disease is by detecting and treating leprosy cases as early as possible. Everyone in the community should positively contribute to this by encouraging and supporting suspect cases to be examined by trained healthcare workers. There is no preventive vaccine against leprosy.

What should the community know about leprosy?

It is important that the messages to the community are simple, clear, and positive to help dispel the fear of the disease.

Some examples of messages include:

● Leprosy is caused by a germ. It is neither hereditary nor a curse.
● Leprosy can be easily diagnosed from clinical features alone by a trained health worker ● A combination of drugs, called multidrug therapy (MDT) kills germs and stops the spread of leprosy after the first dose. Patients on MDT do not spread leprosy.
● MDT is available free of charge at all health facilities.
● Leprosy can be completely cured.
● Early and regular treatment prevents deformities.
● Patients who complete treatment are totally cured, even if they have residual skin patches or disabilities.
● Patients can lead completely normal lives during and after their treatment.