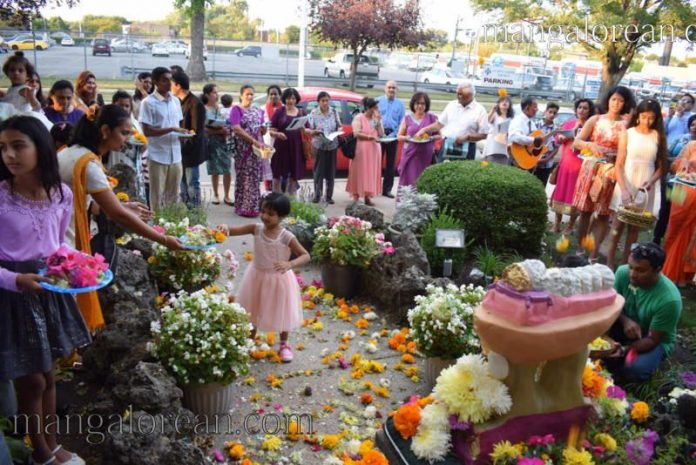 Chicago: It was one of the best days of summer, which welcomed the celebrants to St. Bernadine Church’s Fearon Hall, Forest Park, Illinois. This is one of the star cultural programs presented by the Mangalorean Konkan Christian Association (MKCA) on yearly basis. This event signifies the pure and simple love and devotion of Mother Mary in accepting the heavenly call and sharing her life towards the betterment of human race. Traditionally, this event also signifies the unity and nurturance among the kith and kin by offering the new crop to the Creator and partake it with family. This celebration is similar in its concept to Onam in Kerala and Thanksgiving in USA. The program was well attended by the Mangalorean Catholics around Illinois and surrounding States as well as visitors from India.

The program began with a procession of celebrants, especially, children carrying flowers to express their love, respect and devotion to the birth of Mother Mary, and culminated in front of the church grotto of Mother Mary. With the singing of “Sokkod Sangatha Mellyam” and “Moriyek Hogollsiyam”, children were rejoicing with admiration, joy and respect to offer flowers to Infant Mary.

The Holy Eucharist was celebrated by the main celebrant Fr Cyril Fernandes and the co-celebrants were Fr. Henry Sequeira and Fr. Peter Fernandes. In his Homily, Fr Henry Sequeira narrated how the Monthi Fest was celebrated as one of the harvest festivals back in Mangalorean Diocese. He presented how the Portugues tried to convert Catholic’s Konkani language, customs and traditions of the Mangaloreans and how Mangaloreans retained them. He also narrated how Tippu Sultan took Catholics into captives and took them to Shrirangapatttana and how the British released them. He said Tippu Sultan took about 80,000 Catholics into captivity and when they released them there were only about 10,00 survivors, who came back to the Managlore diocese to work under other elite communities; how they had good rains and fertile crops that year; and how they celebrated their first festival from captivity, which happens to be Monti Fest. He congratulated all the participants for keeping the Mangalorean culture and customs alive in a faraway land in USA. The MKCA Choir members, under the leadership of Concy Misquita and instruments played by Suraj Misquita and Sarah Mathias, gave a special touch by singing Hymns exclusively in Konkani.

The MKCA President, Vissia D’Souza welcomed all the attendees at the program and introduced her executive committee and the co-chairs of the program Ashok and Preema Monteiro. She thanked all the participants for taking part in MKCA family programs for the past 15 years. She recognized the first time attendees to the MKCA programs. She thanked Fr Sanislaw Kuca, Parish Priest of St. Bernardine’s Church for providing the Church Hall and Benjamin D’Souza presented the check to Fr Kuca as a token of appreciation on behalf of MKCA. Fr Kuca, who hails from Poland, thanked in return stating “Dev Borem Korum”.

The attendees were excited to participate in games conducted by Queenie Mendonca. The Hoola Hoop children’s game winners were – Sherwin Lasrado and Maya Menezes. Sarita D’Souza conducted a quiz about Mangloren Konkan Christian history and presented prizes to all the winners. The festive mood was all around the hall and children did exploit the full use of the program by running around and dancing in-and-around the floor.

There was a wonderful Bonanza of Vegetable Menu consisting 11 items along with “Sannam” (idli) and desserts “ Vorn”, Kheer and Mango Kulfi for the dinner to relish on. All this was home prepared by the MKCA family members. All the attendees were happy and content to have these Mangalorean dishes.

The participants enjoyed to take over the floor and dance till they dropped to the tunes of Konkani, Hindi, Spanish and English songs provided by D.J. Shawn D’Souza.

So much to read in Newspapers, web sites and even thru Facebook about the celebration of the Feast of Nativity all over the world, including North America. So fascinating to read so much of cultural and traditional attachment thru the Annual “Monthi Fest” rituals added with liturgical services duly combined with old hymns, songs and customs. Celebrations of feasts such as these all over the world by the Konkany speaking community that connects us together from all over the world. Whether it is in Israel or India, or whether it is in the Arabian Gulf or America or Canada, opportunities… Read more »