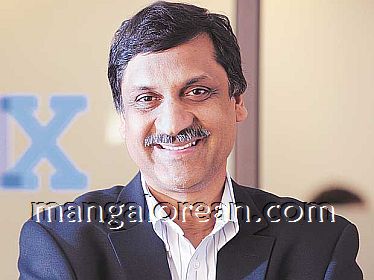 Mangaluru: Mangalureans should be proud to note that Anant Agarwal, a Mangalurean and former student of St Aloysius College-Mangaluru is one among the recipients of 2017 Padma Shri Awards. Anant serves as the CEO of edX, a joint partnership between MIT and Harvard University that offers free online learning. A computer architecture researcher, he is a professor of Electrical Engineering and Computer Science at the Massachusetts Institute of Technology (MIT),-USA where he led the development of Alewife, an early cache coherent multiprocessor, and also has served as director of the MIT Computer Science and Artificial Intelligence Laboratory. He is the founder and CTO of Tilera, a fabless semiconductor company focusing on scalable multicore embedded processor design.

Son of late Dr K L Agarwal and Vijaya, Anant Agarwal is married to Anuradha and the couple is blessed with two children Anisha and Akash. He did his early education at St Aloysius College from 1st to second PUC (1977). He then moved to IIT-Madras where he did his BTech and followed it up with MS and PhD in electrical engineering from Standford University, USA. In 2012, he was named by Forbes magazine among the 15 “classroom revolutionaries” who are using innovative technologies to reinvent education for students and teachers globally.

As the CEO of edX, a worldwide, an online learning initiative of MIT and Harvard, Anant is a leader of the Carbon Project, which is developing new scalable multicore architectures, a new operating system for multicore and clouds called fos and a distributed, parallel simulator for multicore and clouds called Graphite. He is a leader of the Angstrom Project, which is creating fundamental technologies for exascale computing. He contributes to WebSim, a web-based electronic circuits laboratory. He led the Raw Project at CSAIL, and is a founder of Tilera Corporation. Raw was an early tiled multicore processor with 16 cores. He also teaches the edX offering of MIT’s 6.002 Circuits and Electronics.

Agarwal received the 2001 Maurice Wilkes Award for computer architecture. In 2007 he was inducted as a Fellow of the Association for Computing Machinery. In 2011 he was appointed Director of MIT’s Computer Science and Artificial Intelligence Laboratory. In March 2016, he was awarded the Harold W. McGraw, Jr. Prize in Education in higher education as an outstanding leader of the development of the Massive Open Online Course movement. In addition to that, he is also a Distinguished Alumnus of IIT Madras. He has been featured in Guinness Book of World Records too for the largest microphone array in the world. He was conferred with the USA Presidential Award for Young Scientists in the year 1999. He also the publisher of “Anant Agarwal and Jeffrey Lang (2005). Foundations of Analog and Digital Electronic Circuits. Morgan Kaufmann.”

He received Padma Shri, the fourth highest civilian award in the Republic of India in 2017. Team Mangalorean congratulates Anant on his great achievements and for being conferred the Padma Shri 2017 Award.