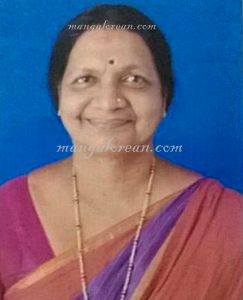 Mangaluru: District Congress Vice President Yashawanti Alva passed away after a brief illness, at a private hospital here, on July 6 at 3:45 am.

Yashawanti Alva (62), wife of M Linganna Alva, a resident of Kadri Shivabagh, was a senior Congress leader and a Zilla Panchayat member. She was admitted to the hospital on July 5 with severe stomach pain.

Speaking to mangalorean.com, Mayor Jacintha Alfred said, “When she was attending the party meetings, she was complaining about a burning sensation in her stomach. She was admitted to the hospital with stomach pain where she breathed her last. The party has lost an active member. May her soul rest in peace.”

The final rites will be held at 3:30 pm. Yashawanti Alva is survived by her husband, son Prathvi and two daughters Preethi and Shilpa.