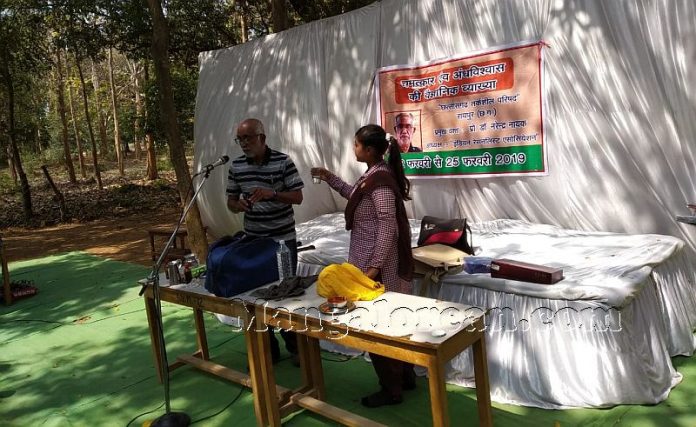 I was on tour of Chattisgarh for four days and an incident that happened at a school called as Manav Seva Samsthan Mandrauth at a village called Megha about 70 km from Raipur is very interesting and certainly worth reporting! At this village there at a school run by a sect called Kabirpanthis (who are quite rational in their approach to most things), a program was held on the 25th inst. The head of the school had invited children from surrounding schools to our interaction about scientific temper. There were around 500 children, several teachers, and villagers. The interaction covered a lot of topics including witchcraft, black magic and also some modern day superstitions like mind-brain activation. This cheating of making children read blindfolded- i.e without light from the object to be visualized falling on the retina had been spreading in this area some years ago and after my visit there and exposure had died down in the urban areas like Raipur, Bhilai etc after a vigorous campaign by some of our organizations. But, now in the past few months, it has been raising its head! This had reached even this place. When I demonstrated the same with a girl from one of the schools a teacher got up from the audience said that her son had undergone the process and could see blindfolded! I told her I would check him later and we went ahead with our interaction. ( (A video in which a teenager sees through a blindfold can be seen here https://youtu.be/EE8u-4kfERk and there are many such online advertising what is called as midbrain activation!)

At this, another person from the audience named Tameshwar Sahu who claimed to be a teacher of Art of living from a nearby place brought a child, who he said had powers of seeing blindfolded. As it turned out he had brought this child just to challenge us! I asked him to bring her on and this little girl of around 8 years was thrust forward asking me to blindfold her and check. Since I had exposed the so-called ‘miracle’ and had explained the trick behind if of reading through the gap between the nose and eyes, he asked whether the children were lying. I said yes. He said whether it was possible that thousands of children would lie. I said yes -when they are taught to! At this juncture, I asked the challenger whether this child could see without the light falling on her eye. He said yes. When he openly agreed to that I pulled out the hood that goes over the face- this made of thick black cloth blocks almost all light instead of the customary so-called ‘blindfold’! That flabbergasted the child as well as the challenger who had expected the usual blindfold! When I covered her face with it and held fingers to be counted and called out. She was wrong every time! When I removed the hood I could see that the child was upset. The children seeing her flop hooted and I felt sad that this little child was humiliated in front of the audience. However, I managed to hug and console her.

But the challenger was not relenting, he continued with his claims as to how she had predicted rightly ninety of the results of the recently concluded Vidhan Sabha elections of Chattisgarh, how she could find out objects all by the power of the third eye etc! He persisted on continuing testing her then and there. I asked him whether he was the parent of the child as their permission was needed for that he said though he was not, he could take responsibility! Then I put forth our customary challenge of reading the number of a currency note which I would fold and hold right under her nose. He said she would try. I held it and she told that she could tell the last three digits. I said it was not possible and she had to tell all. She first gave the last three digits but I said that would not entitle her or himself to anything as I suspected something fishy. I insisted that the whole number should be given. She blurted out a five digit number and as to be expected, the number was wrong even the number of digits being less than what was printed on the currency note! But, what surprised me was the last two digits 40 were correct! This was interesting as chances of guessing that were in 1 in 100! Later on under retrospection I understood how that happened I had been waving the currency not under her nose and during that process she had managed to have a glimpse of the serial number as the last two digits are quite large!(video of the child trying to read the number of the note is here https://youtu.be/IsHjO2qIS18 but please do not post it on any public media without blanking the face of the child.) The man who brought her to the program to challenge us can be seen in the video wearing a blue kurta.

But her teacher Tameshwar Sahu said that she could not perform as it was the usual practice that ten minutes of meditation and yoga were needed before the performance! Then the local organizer Dr Sukhedeve proposed that he could take up a challenge with as many hours of yoga and meditation at a later date at Raipur and he would give a crore to him if she could do that. The challenger persisted with his diatribe about ancient science of India which could enable people to see with the third eye and all that but I told him that I was not interested in any debate but only a practical demonstration under rigidly laid out preconditions and one of them would be the consent of her parents. He said he would bring them along for the challenge! The situation there was such that if the little girl had been pressurized a little more she would have burst into tears raising the sympathy of all and making us look like cruel old men tormenting an innocent child!

Later on, the teacher who had said that her son had been subjected to midbrain activation” after paying a fee of four thousand rupees was reading blindfolded but when she tightened it started weeping and shouting that his eyes were hurting! Her husband then told her not to torment the child and she had stopped. After seeing our demonstration it became clear to her as to how she had been misled into believing that her son could see blindfolded!

After the metros and grade 1 cities, the thugs of the midbrain activation scam have now spread to rural areas where they have now started plying their cheating business. With fancy claims like ancient Indian science and third eye activation, they have started duping parents with this new jargon. In urban areas, the charges for this process are in tens of thousands while in the smaller places it is a few thousands! However, the common factor in both is the gullibility of the species! Our people just want to hang on to their beliefs and the cheats exploit their gullibility and most of the people do not even want to accept that they have been taken for a ride. But the campaign against this scam is picking up again. Three years ago when I had been to Raipur we had taken up exposure this following which a sustained campaign by the local organizations had forced such scamsters to close shop. Since public memory is short they had started it again some weeks back and it was good that my visit there brought the issue to the forefront again. We are just waiting for the challenge to be taken up under controlled conditions which we are going to specify. However, going by our previous experiences it is going to be unlikely!