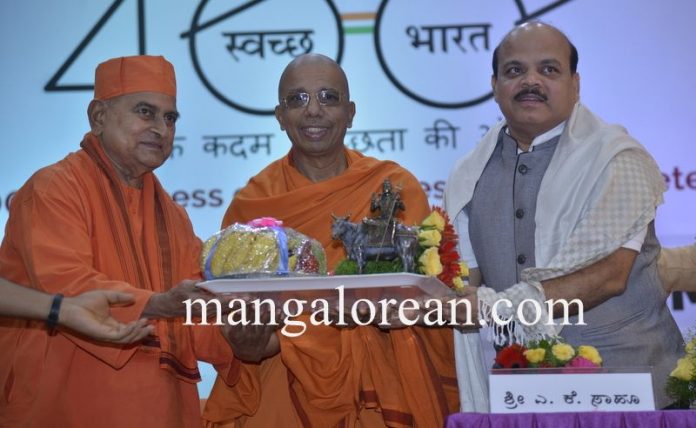 Mangaluru: Ramakrishna Mission Mangalore has been organizing Swacch Mangaluru Abhiyan for the last two and a half years on special request from the Govt. Of India. The Abhiyan which was in the 3rd phase and nearly 60 groups in different parts of Mangaluru and nearby, and actively involved in the cleanliness drive and have been successful in creating an awareness about hygiene and cleanliness among the public. Now they have completed 400 cleanliness drives in the 3rd phase on 28th May 2017.

Due to the onset of Monsoon, a break will be given in the ongoing Abhiyan, which will resume from October 2017. Hence concluding programme of the 3rd phase of Swacch Mangaluru Abhiyan was held in the Ashrama auditorium at 10 am on Sunday, 11th June 2017. Srimat Swami Gautamanandaji Maharaj, Vice President, Ramakrishna Math & Mission presided over the function. Dr. N Vinay Hegde, Chancellor of Nitte University, Sri Nalin Kumar Kateel, Hon. MP of Dakshina Kannada Dist., Capt. Ganesh Karnik, Hon. MLC, Sri A K Sahoo, Director ( Finance) of MRPL, and B H V Prasad, GGM of MRPL participated in the programme as Special Invitees. On this occasion, all the volunteers of Swacch Mangaluru Abhiyan were honoured.

This campaign which was initiated on the 1st February 2015, has been going on in full swing, with many volunteers from Schools/colleges/organizations coming forward to take part in this unique project in order to make Mangaluru a cleaner city, under the campaign “Swachh Bharath” launched by PM Modi. And now after completing 400th project under this campaign, is something that needs to be complimented. I think it is a very good initiative taken by Ramakrishna Mission with a strong motto to see that Mangaluru is kept clean under PM Modi’s “Swachh Bharath Abhiyan”.

Remember when PM Modi had said, “Is cleaning only the responsibility of the karamcharis? Do citizens of India have no role in this? We have to change this mindset. We reached Mars. No PM or Minister went. It was the people who did it, our scientists who did it. So can’t we create a Clean India?. If this is evaluated by a photo-opportunity, then we would be doing a disservice to the nation. We all must come together and do this (clean India) wherever we are. This is not about Modi… Modi is only one of its 1.2 billion people… This is a people’s task. India can do it. People of India can do it.”. Yes, volunteers under the guidance of Ramakrishna Mission are doing a great job of cleaning, but it’s also the responsibility of the general public to see that they don’t litter the place again which has been cleaned with dedication and community service by these volunteers. Yes, the members and volunteers of Ramakrishna Mission took PM Modi’s words very seriously and did launch this Clean Drive Project of 40 weeks, in order to have Clean India/Clean Mangaluru.

Today’s 400th Cleanliness Drive programme began with invoking God’s blessings through a prayer song rendered by Swamis of the Ashram, followed by welcome address by Capt Ganesh Karnik, where he said that the main prop of Ramakrishna Mission programme has been the dedication and commitment of youth volunteers and students from different institutions in and around Mangaluru. Added to their dynamism is the devoted service and zeal of our devotees – well-wishers and friends who have continually supported the Ashram. Govt. officials and agencies have also lent all the possible help in this programme. It’s nice to note that with the support and encouragement of all the supporters and well-wishers we have accomplished the goal of conducting 400 cleanliness drive.

In his presidential address, Swami Jitakamananda said, ” As our main intention was to create awareness among the masses about cleanliness, we involved more and more public in the drives by forming different group of volunteers participating in the drives in different parts of the City. Today, as we have reached a major milestone of 400 drives, we wish to thank all the volunteers and well-wishers and patrons for their un-stinted support. Added to 400 cleanliness drive, we brought awareness on this campaign through 30 magic shows of Kudroli Ganesh, which reached out to the common mass with the message of awareness on cleanliness. We have now decided to take forward this campaign to the Gram panchayat, where we plan to involve villagers to keep their surroundings clean.”

” Although we have completed 400th drive, we still invite all the interested persons, who feel in their small action lies in the future of our great nation, to come forward and join this mighty cause. Let’s work together towards a Clean Mangaluru and Clean India. Leadership, co-ordination and commitment were the three main factors that resulted in the success of our project. Also the support from team leaders and volunteers we could reach 400th drive very successfully. Volunteers were the pillars and backbone of this project. Not to forget, the media also played a vital role in highlighting our efforts, thereby bringing us applauds and compliments from all over the world. Even the citizens were part of this great mission, without whom this project would not have seen the light of the day. Although we have created awareness about cleanliness among 80% of citizens, we need to try hard to make sure 100% of the citizens get this message. thank You” added Swami.

Since last year, Ramakrishna Mission has taken up special initiative named “Arpana” of distributing branded clothes to poor and needy people from rural areas. Last year about 6000 people had benefited from this programme. This year, Ashrama has plans to reach out to 20000 people of rural areas of Dakshina Kannada & Udupi Dist. This programme was inaugurated in the Ashrama on this occasion by Srimat Swami Gautamanandaji Maharaj, and Swami Jitakamananda- a few people received the clothes during today’s programme.

Srimat Swami Gautamanandaji Maharaj addressing the audience said, ” Better keep yourself clean and bright; you are the window through which you must see the world. An old proverb says, “Cleanliness is next to godliness.” This means that cleanliness comes next to godliness in importance. But true godliness surely means cleanliness of soul and body. It is an absolute necessity for one’s self respect. Cleanliness of body is necessary for physical health. No one can keep healthy who is afraid of soap and water. Not only the regular washing of hands and face, but the frequent and thorough bathing of the whole body, and the wearing of clean clothes, are conditions of good health.

“To keep our house and neighborhood clean is our utmost obligation as it the only remedy available for national health and hygiene. The uneducated people need to be instructed in civics and cleaning surroundings. Cleanliness of body leads to the cleanliness of mind, and thereby to the soul. Governments and administrative divisions should engage themselves more seriously and bring to book those who are responsible for littering up the public places. Just as light is a symbol of truth and goodness, and darkness of ignorance and evil, so dirt is a symbol of moral evil and cleanliness of moral purity. Sin is dirt; and in all religions the sinner prays to God for cleaning. I compliment Ramakrishna Mission for their great achievement in Swachh Mangaluru abhiyan, and I am sure it will be role model to the entire nation. Let’s all make Swachh as part of our lifestyle” added Swami.

MP Nalin Kumar Kateel and Vinay Hegde also spoke and complimented Ramakrishna Mission on their accomplishment of 400th Cleanliness Drive. In conclusion, Why only Ramakrishna Mission? Cleaning the nation is not a day’s job. Neither can this be achieved by just govt agencies. It demands participation from each and every responsible citizen. Ramakrishna Mission has always stood in the forefront in the service of the society. They seize this opportunity to serve the nation through leading from the front by taking up this cleanliness drive. The Initiative of the Drive includes: Cleaning roads and public places; Awareness programme through distribution of literature ; Urgent & minor road repairs; Clearance of drainage and garbage; Renovation of dilapidated and neglected bus shelters; Painting and beautification of compound wall; Clearing non-usable dumping places for public utility; Developing gardens and planting saplings at road medians; Adopting a few roads; Planting saplings on roadsides; and Cleaning and painting in the govt. school premises.

Yes, with PM Modi and his government launching a mission called, Swachh Bharat, where our PM took broom for seconds, so did big people who would never know how to catch a broom in a lifetime. Now if the streets are dirty again, there are reasons, one of them there aren’t enough garbage bins to throw garbage, and worse, no public toilets, and then you are forced to dirty up the place, it could be citizens mistake, and in the same time, government’s too for not providing better facilities. We need more than some media campaign, we need some real groundwork being done from government. You want me to not litter, well then provide me garbage bins, you don’t want me to pee on the roadside, well have public toilets installed etc etc. Well, while Ramakrishna Mission volunteers and rest of the citizens are trying to keep city clean, the government should also cooperate in providing enough dustbins/garbage bins and also enough toilets. The govt officials should also join hands with the volunteers and note how the Swacch Bharath campaign is progressing.

“…Swachh Bharat, where our PM took broom for seconds” – Report. It’s unfair to expect Modi to spend hours cleaning the streets. He has managed to inspire tens of thousands of volunteers to take up this initiative. He alone can’t do everything. By the way, how come there is no word on local MLA (‘beautification’) who chose to ignore this campaign for 2.5 years? Oh well, this is the sad state of our society. By the way, special thanks to this portal for covering this great campaign week after week. Your reporting with tons of pictures were very informative. Unfortunately… Read more »