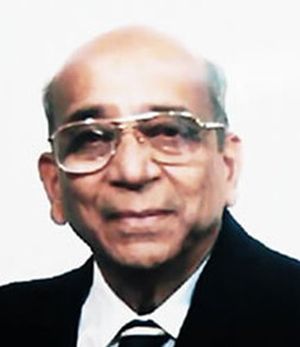 Gollerkery Vishwanath Rao, is kind, humble, very helpful and down to earth person. He is the third person in the history of India to receive Mahatma Gandhi International Peace Prize Gold Medal. He considers winning this Peace award, the highest point in his career and life for that matter.

Mr. Rao was born to Late Sri G. Krishna Rao, who was a lawyer by profession and Late Smt. Girija Bai on November 11, 1919, in Kadri, Mangalore. Mr. Rao spent his first 18 years in Mangalore and always considered Mangalore as his home town. He moved to Paris in 1948, upon a recommendation of Sarvepalli Radhakrishanan who was Indian Ambassador to UNESCO at that time.

Early part of his education was at Ganpathi High School and Govt. College, Mangalore. Later, he completed B.Sc in Mechanical and Electrical Engineering from Banaras Hindu University. He applied for Indian Railway Engineering Services however, Mr. Rao says, it is destiny that he was not accepted and God had other plans for him. He went to Ipswich, UK on Govt. of India scholarship. He was told his training was far superior and was sent to University of Berkely, California, USA. He studied present day equivalent of MBA for three years.

Mr Rao met Dr. S. Radhakrishnan in San Francisco who was extremely happy to meet and hear about Mr. Rao and suggested he go to UNESCO in Paris. He went to Paris under the scheme of Young Professional Programme and eventually became Assistant Director General of UNESCO. Once he retired he was requested to take charge of Mason de Linde in Paris where most of the graduate and postgraduate students from India resided and was Director of the same for 18 yrs. At the same time he continued to function as Special Advisor to Director General of UNESCO, which he does even today. During his tenure as Assistant Director General, he used to travel to UNO Headquarters, New York three times a year and has given several speeches there.

He firmly believes Dr. S. Radhakrishnan who was Vice Chancellor of Banaras Hindu University, when Mr. Rao was studying there as his sole motivator.

Mr. Rao is married to Mrs.Uma Rao. Together they have a son Jayanth – works at UNESCO at present and daughter – Jyotika is a Professor of Dance and Music and both are married and live in Paris, France

Awards and honors:
• Winner of Gold Medal as best outgoing student in Engineering, Banaras Hindu University.
• Winner of Gold Medal three consecutive years for elocution, prompting Vice Chancellor Dr. S. Radhakrishanan to say “aren’t you going to give a chance to others to win”
• Gold Medal for promoting peace over a period of 50 yrs awarded in Chanakya Puri, New Delhi.
• Awarded Mahatma Gandhi International Peace Prize Gold Medal. First winner of this award was Mr. P. V. Narasimha Rao, former Prime Minister of India, second Mother Theresa and Third Mr. G. Vishwanath Rao.
• Dr. T. M. A. Pai Gold Medal for his contribution to Konkani Community in 1995.
He has established a scholarship for meritorious students at Ganapthi High School in Mangalore. His contributions mainly are towards peace in general and education of Konkani children and social awareness specifically.

I met him through mutual friend in New York in 1988 during one of his trips to the United Nations. Even when I met him recently after 18 years, I still find him full of energy and very sharp and was delighted to see me again. He was only glad to hear about Mangalorean.com and exclaimed “what a wonderful idea to bring Mangaloreans together”.

What impressed me the most about him is, even though he has won so many awards and reached very high position in UNESCO, he is still very humble and kind.

Mr Rao’s message to our readers:

Whatever work you are doing, do it with intensity and total loyalty. I believe in luck and destinies, when an opportunity knocks take it and do your duty honestly
Mangalorean.com salutes Mr. Rao and wishes him all the best in his life.
Submitted by Dr. K.B. Mallya

Sree VeeraMantesh Swameeji mbl:918553860151, India:
Very good article. Life of Dr.Rao and words used for him both are ideal. Dr.Rao’s guidelines to ppl are inspiring and enlightening.