I held her close to me. There was my six-year-old “mother” peacefully sleeping, with an angelic smile on her face. Well! She was my daughter and I her real mother, but the journey of the last six years with my little one proved otherwise. They were years of Misery, years of Pain, years of mental and Physical Abuse and Rosia was the one who had stood strongly beside me.

Wordsworth had quoted in his poem that Child is the Father of Man and in my case, my Rosia was my parent figure too. She was my Mother and daughters sometimes can be mothers too and this is when I decided that I must submit this story as a dedication to my little mommy.

It was her birth that finally brought me my freedom, my Happiness and my Second Chance. One wrong man in your life can cause havoc and that was what had happened in my life too. I had met Andrew, an extremely attractive sexy young man in my early twenties. After a whirlwind of romantic courtship, I had fallen in love with a man who was even more “madly” in love with me. Or so I had mistakenly thought then!!!!

He was the typical Movie Hero who would woo me with flowers and chocolates and sweep me off my feet with his wonderful gestures. He was my Dream lover! The perfect Gentleman who treated people below him with respect, had a great sense of humour and loved watching movies and bike rides. That was all that I was looking for!! But the only dark lining in this silver cloud of mine was the nasty little temper that he had, which made him behave like a possessed man at times. The fatal mistake that ruined my life forever was me ignoring the warning signs. The silliest of things would drive him crazy. I owed it to the circumstances, where everyone in the family was against our love story and the lousy job he had then. If anything went against him, within minutes he would slash his hand with a blade and thrash his head against the wall. Like a fool, blinded by love, I thought it was just him being immature. And as all women who wrongly assume, I thought that I would change him too!!! I couldn’t have been more wrong!!!

After the families gave in and the wedding took place Andrew started unfurling his real self to me. Life with him became a nightmare. Within a fortnight I realised I had chosen a monster for a life partner because there wasn’t a day that would pass by without him hitting me on the flimsiest of excuses. After two rib fractures and an eardrum rupture, I realised I was in an abusive relationship. Like most “literate” illiterate women living in India, I kept thinking to myself that prayers, counselling sessions and retaliating would help. Nothing did. To make matters worse I was pregnant, so, I did the worst thing anyone could ever do. I kept silent and suffered inwardly.

The Social stigma of having to live in a society which does not accept Divorcees kept me from sharing my problems with my family and loved ones. And to top it we were living in another town far away from my parent’s home. The Devil (My husband) would pretend to be an angel whenever my Family visited me because he was so sure that I would never have the guts to tell them the truth and break their hearts.

When Rosia turned two she realised that there was something wrong with her “Daddy- not- so Dear”. She would see me weeping every other day and she would end up crying. But Rosia was the one who told my parents, during one of their rare visits home, in her baby lisp that “Daddy beat Mommy”. Mommy hurt, Cry every day”. My parents confronted me and then I broke down and told them the truth about the beatings, the verbal abuse, the mental and physical torture. After a painful Divorce procedure that took more than two years, I was finally, legally free from the Monster. I was back home living with my daughter and my parents.

But then began the real struggle. We were out of the clutches of Jason, but we had to face the entire world on our own now. Rosia remained my pillar of strength even as people around us remained judgemental, sometimes indifferent and sometimes plain mean.

I had to start life from scratch again. I found a teaching job far away from home and I had to work part-time too to help with the extra expenses of the family. There was always an Independent streak within me, so though we were living in with our parents, I never wanted to burden them with our financial problems. Rosia never complained even when I came late at times, or even when I had to sit with my laptop and work on writing assignments. She was fond of art and she would quietly sit by my side without throwing any tantrums or trying to seek my attention and draw and draw and draw.

In School, when someone would ask her about her Dad she would say very boldly that Her Dad had chosen not to live with us and her Grandad was her Hero and Dad all rolled into one. I would see the pain in her eyes every time she saw her friends’ dads come by, hug their little ones and pick them up from school, but there was never a single day she would share her pain with me.

I still remember the day Rosia turned Four and I was being asked by a friend as to what had gone wrong in my marital life. Just as I was about to begin my tragic tale, she walked over to the two of us and told my friend point blank “Mom has forgotten about the story. Please don’t talk about it again” and went back to her paint and brush. That’s when I realised that my daughter was being protective and also trying to tell us that there was no point in going backwards in life.

Then I met Shiva, an old classmate from College. Sweet, Caring, lovable and kind. We became the best of friends and then he proposed. But I couldn’t say a “Yes” to him because I was scared. Once bitten, twice shy. One he was from a different Religion than us, which meant that my parents would never say yes. And two, I was afraid that if Rosia wouldn’t like him, then there would be no point trying to pursue this relationship. I kept the friendship going and to Rosia, uncle Jai was just one among her Mama’s friends.

One night as we were lying on our bed and I had just finished telling her bedtime story, Rosia turned around and asked me “ Mama, don’t you think Uncle Shiva is really sweet!” I didn’t know where this was going, so I just said, “Yes, He is!” She continued blushing, “Well! Don’t be mad at me but this evening at the Mall when you were busy with your friends I kind of asked him if he could be my Dad! He asked me to ask you and let him know. Please say yes. I really like him and he likes you Mama! I ‘ve seen him staring at you many many times!!”

That was a month ago! After which, there was a lot of family drama which involved my parents kicking up a fuss because they had lost trust in my ability to judge people. But it was Rosia who convinced them that Uncle Jai was a really good man.

There was no looking back after that! MY little flower girl is all excited about her Mama’s wedding and is busy planning for it too. She turns 7 tomorrow. As I kissed my sleeping little angel again, I thought to myself that Wordsworth was never ever wrong when he penned those words. My Daughter was more of a Mother to me in every way possible!!!! 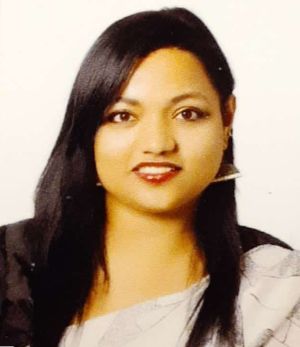