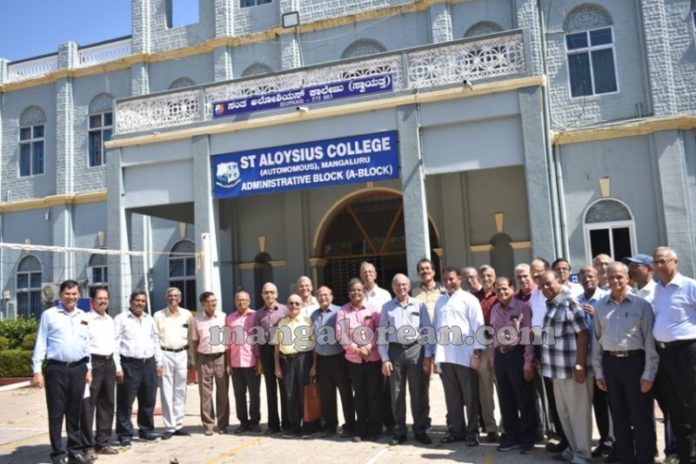 Mangaluru: Seems like Yours Truly of Team Mangalorean/Mangalorean.com has become the Official Reporter of all the St Aloysius Institutions Reunions that have been hosted recently, namely the ‘1974 SAC Batch’; “1975 SAC batch”; 1977 St Aloysius High School Batch” and now it’s the turn of the Good Old “Pokri ” aka “Naughty & Notorious Boys” of the B Com 1970 Batch of St Aloysius College, who hosted one of the memorable and well-planned “GOLDEN JUBILEE REUNION BASH:, for the FIRST time, where nearly 30 classmates out of the 79 members of the B Com 1970 batch reunited after FIFTY years once again and met on the comm on a common platform, where Friendship and bonhomie were rekindled, talents exploded, memories were recalled, good old jokes and funny moments shared- and it turned out to be the BEST REUNION BASH these Young Fellows between the vintage age of 65-67. 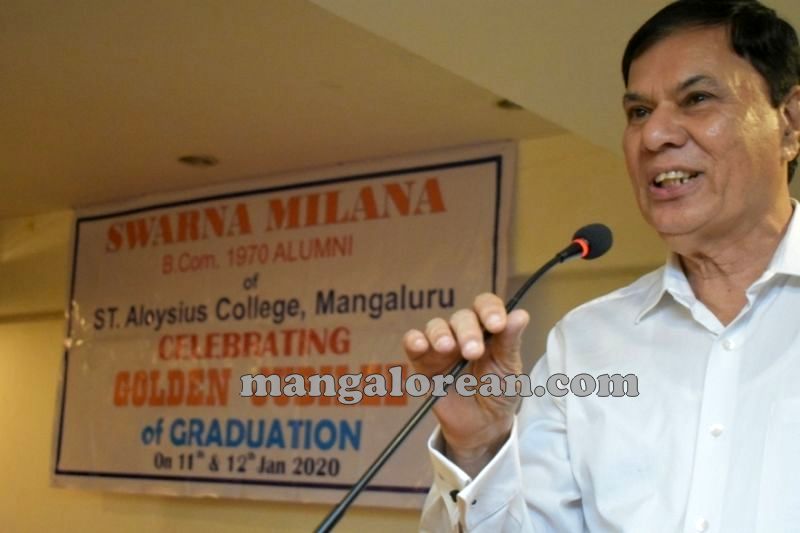 The group was predominately of the same trend, where a few of them had lost few parts in their body, like hair, teeth, added to that hearing-loss or bad sight-but they were all still young like they were during their college days in 70’s. Old is Gold!-that’s right. We don’t believe age is any more than a mere number. As they say that “Ageing is not ‘lost youth’, but a new stage of opportunity and strength”- there is no age limit when you are still capable of doing great things in life, either in co-curricular activities, entertainment, or sports. No matter what age someone has reached, they are all still young in their minds and there is a huge need for a redefinition of how we see age. And like these boys of 1970 B Com batch, who themselves admit that they were naughty and notorious, and did lot of mischief during college days, but in reality after college have turned out to be high-class Professionals in banking Sector, Business, Chartered Accountant and Entrepreneurship. 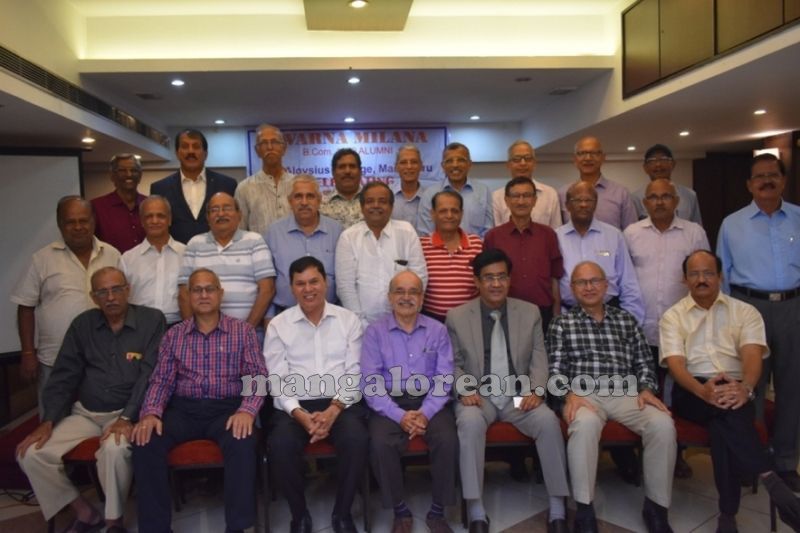 Especially during a Reunion of classmates, it’s always a history, where past memories are shared and cherished. Yes, reunions-they can be excitedly anticipated or painfully dreaded. Either way, the first hour or so can be awkward as classmates shuffle in from all over. Reunions should include time for catching up and renewing old relationships. Getting past that awkward hour will get a little easier, if there is lots of fun and easy reunion ice breaker games. And for that matter, the reunion or call it a get-together of a bunch of classmates who shared the same classroom or may be shared the same benches came together to have a social night out.

Yes, Class Reunions or Alumnae Reunions are a chance to brag about what they may or may not of accomplished. For some there is the fear of what has not been accomplished. And there are some, that are just interested on how far people have come. There is also a chance to look at the humorous side of things. Spending time looking at the fashion and the hair in old photos, and is also a chance to look back at some of the stupid things that were done while being classmates. And this Reunion of Class mates meeting together after 50 years, was indeed a memorable one, and every one of them who joined in the Golden Jubilee Reunion Get-gether had a jolly good time and made the best use of fun and frolic they could enjoy during the two-day celebration, on 11 and 12 January 2020. 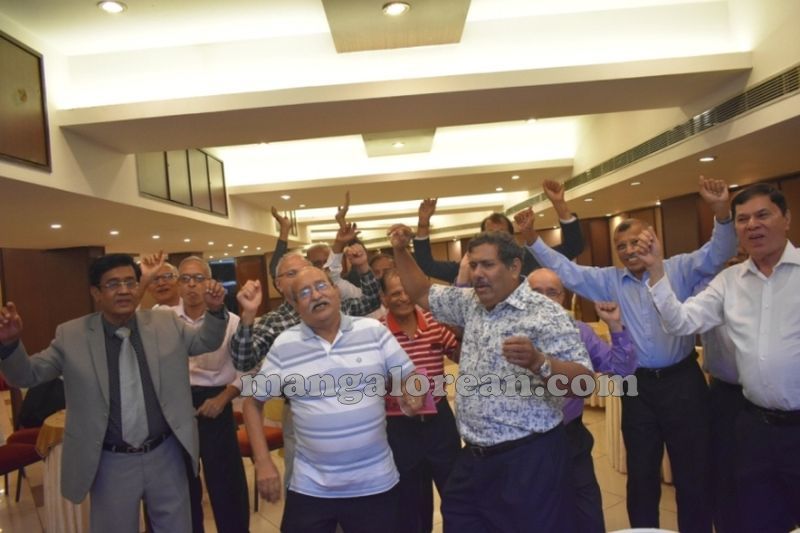 On Saturday, 11 January the batch mates gathered at Hotel Deepa Comforts, being the First day of the Reunion, a Bash jointly co-ordinated by Michael D’souza and Peter Oswald Rodrigues. The celebration began with a prayer song by Peter Rodrigues with befitting hymn “Bind Us Together Lord”, followed by welcome address by Michael D’souza, where he also appreciated the love and care shown by their lecturers and their role in shaping and moulding their lives with good values, discipline and moral. Yashwanth Prabhu-Ex-Chairman and Managing Director of Oriental Bank of Commerce spoke on behalf of all the 1970 B Com class mates, and brought back memories of their class and college days- he recalled the best days of student life in St Aloysius College, and cherished the memory spent with their principal Fr L F Rasquinha, Prof B S Raman, Prof Shanker Bhat, Prof U D Nayak, Prof K T Shetty, Prof Valerian D’mello, and few others. 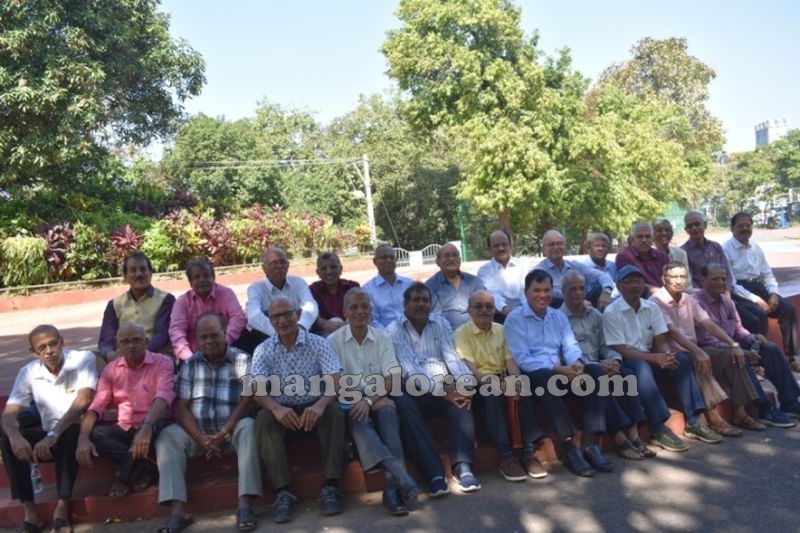 A two minutes silence was observed to pay respect to the departed souls of their class mates, namely- Samuel Sydney Mohan, Patrick Pais, Pratap Chandra Rai, Nagesh Kamath, Madhav Rao, George D’souza and Ganesh Shenoy- it was indeed a sad moment to miss these seven class mates on the joyous Reunion celebration. Not it was tin e for some spot games and fun & frolic, which was conducted by Peter Rodrigues- and every one actively participated. While the fun games were conducted, including Tongue Twister game, simultaneously it was fellowship time, and everyone cheered for a prosperous & Happy New Year 2020, and wished to host their Platinum or Diamond Jubilee Reunion, if not many kicked the bucket by then? 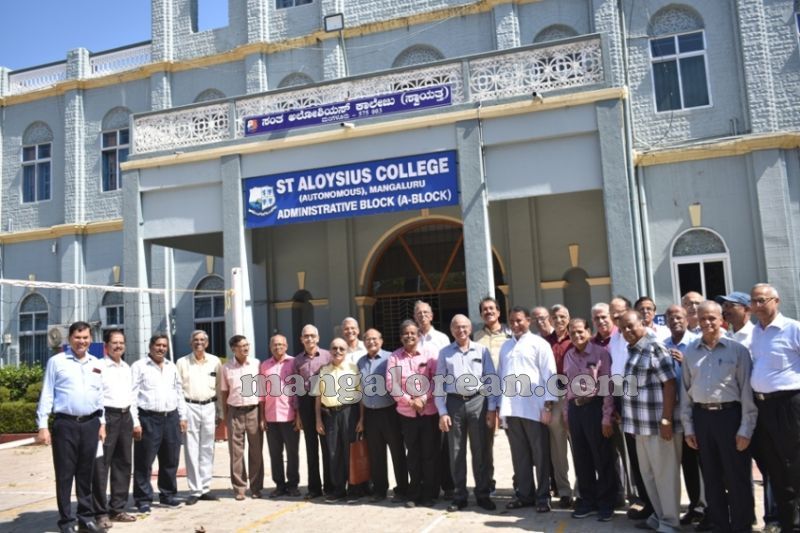 All this fun, frolic, sumptuous food along with fellowship, music and dance, with a housie housie game marked the First day of the Golden Jubilee Reunion, which culminated with vote of thanks proposed by Gerald Monteiro. On Lazy Sunday, 12 January it was a day to explore the much changed College, where after a sumptuous breakfast, the class mates toured the campus, visited the New museum, swimming Pool, Centenary Ground, Chapel, and assembled at B Com class room, to bring back memories of their B Com class days of 1970. Fr Praveen Martis SJ-the present Principal of St Aloysius College also joined the group in the classroom and interacted with the 70’batch. Few of them brought back memories of their classroom life, and it was fun to listen to some of the stories, some troublesome, of their activity of 1970 B Com batch.

After spending a hour long time in the classroom, the group headed back to the college hall, for a formal function, where they all acknowledged the value based education received from SAC and felicitated two of their beloved lecturers, Prof Shanker Bhat, in his 80’s and Prof U D Nayak, aged 92. The duo lecturers were felicitated by present Rector Fr Dionysius Vas SJ, along with Fr Praveen Martis SJ, Principal of SAC, Santhosh Kumar Kadri, the President of St Aloysius College Alumni Association (SACAA), and Allen Pereira- former CMD of Bank of Maharashtra. After being felicitated bot Prof Bhat and Prof Nayak totally overwhelmed expressed their immense gratitude to their past students, and also their College, and as a kind gesture Prof Bhat promised to donate Rs one lakh to the development of St Aloysius College-Deemed to be University in the nearest future.

Speaking on the occasion, Rector Fr Dionysius Vas SJ said, “While you all exited out of St Aloysius College, I wasn’t even born then, but as a Rector of SAC I am overwhelmed to see you all, who have served the society in your respective professions. For us Jesuits it is important to know what our men and women are doing because we feel proud of their achievements when they leave our institution. As they say that ‘An Aloysian is Always an Aloysian’, there are three challenges- Academic Excellence, Character Foundation, and Social Concern’- and you all have proved it”. 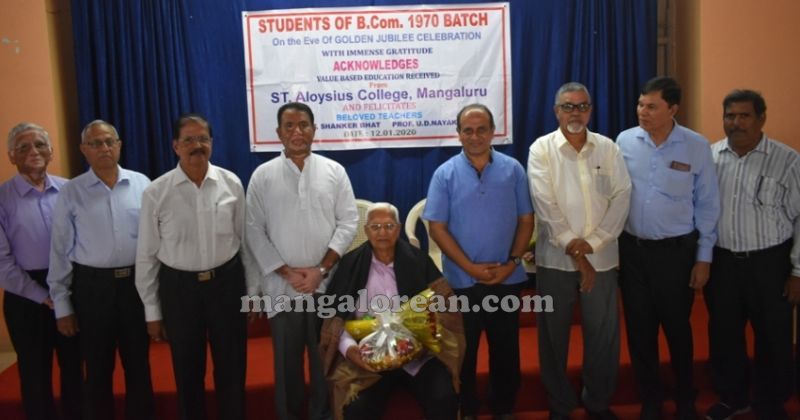 No doubt, the two parts of this “Golden Jubilee Reunion’ of 1970 B Com Batch of St Aloysius College was well organized by Michael D’souza and Peter Rodrigues, and these class mates enjoyed every bit of the fun and social moments, that they want such Reunions in the years to come. Apart from kudos to Michael and Peter, special compliments to Vikram Rao Sujir, who meticulously and professionally compered the proceedings on both days. A job well done!

Hello Alfie Sir,
It would be great if you could also share the picture of then 1970 batch picture. Will definitely hit the right chord. Great detailing though..🤗