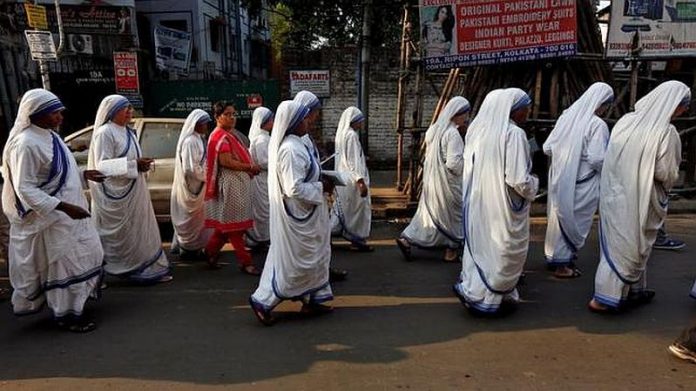 No bail yet for Sister Concelia Baxla, a Missionaries of Charity nun, and her staff under arrest for over 230 days now

In our Country, today people who commit murders in broad daylight, swindle crores of public money, indulge in rape, and commit other atrocities against humankind roam scot-free because they are “Innocent until proven guilty”. On the other hand, there are thousands of innocents who languish in jails for years without any charges, and these do not have the political influence or money power to escape the tyranny of the law. Once such case in point is Sister Concelia Baxla and her staff Ms. Anima Indwar.

The Missionaries of Charity, founded by Mother Teresa, is a worldwide organisation of over 5000 Christian nuns who are serving the poorest of the poor in India from the 1950s. The ubiquitous humble souls with the trademark white saree with a blue border are the down to earth religious nuns who run 79 MoC homes for children in the country. Today, It is very saddening to note that myths are being spread, information distorted, and baseless innuendos are thrown around regarding the Missionaries of Charity and Catholics in general.

Sr. Concelia Baxla was arrested on July 4, 2018, in connection with the reported sale of a child from the Nirmal Hriday home in Ranchi. Her bail plea was for the third time rejected by the Supreme Court of India in the last week of January 2019 because the police have not filed any formal charges against her. Mr. Michael from Alliance for Defending Freedom (ADF) India says this is very ironic. When the incident first made news, baseless allegations were made against the Missionaries of Charity by a biased media. This is a deliberate attempt by forces inimical to the Christian Community to malign the Christians in this country, he added. We understand that ADF is making all efforts, coordinating with the best legal brains in this country and is leaving no stone unturned for the release of Sister Concelia and her staff. The Supreme Court of India has remarked that the charges of child trafficking are heinous but the actual sections under which Sr. Concelia is kept under arrest is unknown. A copy of the FIR is not available in the public domain.

The many homes of the MoC open their doors to the poor, helpless, and the unwanted and treat them with respect and dignity. In the category of unwanted are the thousands of teenage girls who end up with an unwanted pregnancy. Many otherwise land up at the nearest illegal abortion clinics in the country that murder the unborn. The intervention of the MoC to provide shelter and care to the unwed mothers is to prevent the murder of the unborn. Possibly some informed consent may be taken in writing from the mothers with regards to any medical treatment or decision making. This in no way amounts to be a blanket consent handing over the ownership of the newborn to MoC as vilified in some sections of the media. These women go through pregnancy and deliver the child. Nirmal Hriday is not an adoption agency, has never acted as one, and takes no ownership of the newborn. NirmalHriday has only rejoined the Government adoption system after a three-year hiatus. The biological mother has all ownership of the child but is unable to provide care. The decision to put up any child born outside of wedlock for adoption is purely the informed decision of the biological mother and the prospective adopters. The staff of Nirmal Hriday escort the unwed mothers, their babies, and their guardians to the hospital and the Child Welfare Committee office. The CWC has no proper records and gives no acknowledgment for the babies entrusted to them. So, one wonders when it is the duty of the government to take care of her citizens and the government has failed and it has got its priorities wrong. It is in this space that selfless individual and organizations mostly associated with the churches come forward and help the poor and the needy. Thus if the murder of the unborn is not seen as a heinous crime in this country and the unsubstantiated allegations of child trafficking is heinous- God save my country.

The laws of the land

Citizens can adopt in India under three major legislations: the Hindu Adoption and Maintenance Act of 1956, the Guardians and Wards Act of 1890 and the Juvenile Justice (Care and Protection) Act of 2000, amended in 2006.

All adoptions in India are required to follow the procedure set out by the Central Adoption Resource Agency (CARA). In case a child’s biological parent(s) decide to place the child in adoption, the laws state that the Indian State is the guardian until such time as a family is chosen to parent the child.

For adopting a child to be legal, CARA procedures should be followed. Any hand over of a child in a hospital to a family is not a legal adoption.

• Trafficking in human beings or persons is prohibited under the constitution of India under Article 23(1).
• Protection of Children from Sexual Offences (POSCO) Act. 2012, a low to protect children from sexual abuse and exploitation.

The above are just two of the anti-human trafficking laws in India. With a view to tackling the menace of human trafficking, Ministry of Home Affairs, Government of India has undertaken a number of measures. Ignorance of the Law is no excuse.

The role of the Catholic church

The arrest of Sr. Concelia points to a reality that the Catholic Church in India being all that powerful is actually helpless in ensuring that justice is rendered to one of the religious sisters. This raises another important question that cannot be ignored. What about the poor in our community who do not even have access to a lawyer and are languishing in jails for years without any charges framed. Who will stand up and talk for these helpless poor among us.

Theodore Mascarenhas, Secretary General of Catholic Bishops Conference of India has expressed his concerns in a blog.

Click here to read: An innocent sister in Jail.

The Catholic Church plays a vital role in the NGO sector around the world and also in India. Education and healthcare are two of the areas where they have filled up space with the sole aim of helping the poor and the needy with unconditional love based on the teachings of Jesus Christ. The allegation of Child trafficking is a very serious issue in the eyes of the law. One of the problems with the Catholic Church is that the different arms of the church work in silos.

Sometimes resulting in scenarios where some members of a denomination themselves do not know what the other members are doing. It is time the Catholic Church came out with a document sensitizing her people who are in the frontline working with children and marginalized. Perhaps, there is a need for more professional management of Church affairs. It is not sufficient if a priest or a nun does an MBA, it will not always make them a good manager. The community has a rich pool of professionals from various streams that should be harnessed. Sister Jayasree Boppatti, a Montfort nun, based in Bangalore and working with around 50 foster care homes taking care of more than 500 children states the Missionaries of Charity nuns are absolutely innocent and feels that the trust that these nuns placed on the extended staff in good faith could have been misused by an individual. She reiterates that Sister Concelia or the others from the congregation are no way involved in any child trafficking. This is a completely wrong application of the law, she added. She also says that the nuns and priests should be more prudent and be well versed with the relevant laws when dealing with children and the administration of social service in a secular environment.

What can you the reader do

Unfortunately, this situation is a combination of the ignorance of the religious authorities, high handedness of the authorities, manipulations of the political authorities, and the apathy of the justice system. There is an online petition started on Change.org