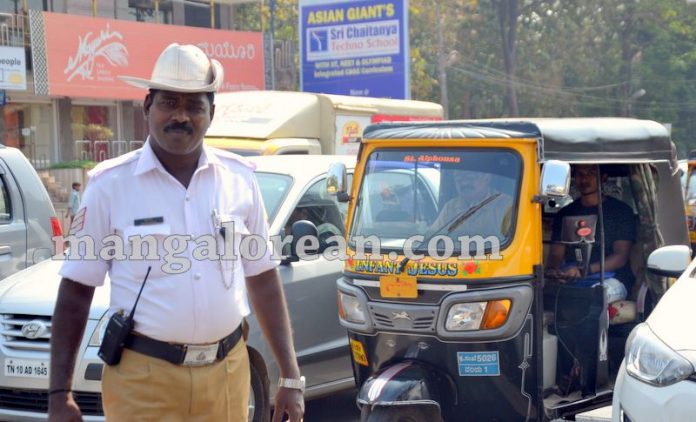 Not Just a Traffic Cop, Shanthappa Babu is also a Writer and Poet

“You may get an eye from an eye bank or blood from a blood bank. But you can’t get a head if you lose it in a road accident!”. Another one ““There is no need for a speed-breaker in front of a ‘Women’s College’. (In-directly refers to Besant Women’s College, where he is stationed most of the time)-Vehicles automatically slow down?”- these are couple of humour messages compiled by traffic Cop Shantappa Babu in his book ‘ Masth Maja Traffic-2015’.

Mangaluru: In the present day scenario where we come across many traffic cops while we drive, ride or walk around in the City- how many of these traffic cops do you think are sincere, honest, non-corrupt and very much dedicated to their work. I guess not many, and I bet you will agree with me. But there are quite a few other traffic cops who are very much committed and dedicated to the duty assigned to them in seeing that the traffic rules are followed, help pedestrians cross the congested roads, nail those who break the traffic rules/laws etc. Last time I did an exclusive column on Traffic Cop Rosamma, whom I picked as one of the most dedicated, strict and disciplined lady traffic cop that I have come across. And this time it was time to pick yet another of my favorite gent cop, Shanthappa Babu, aged 37 who has been promoted as a Head Constable at Mangaluru Traffic West Station-Pandeshwar.

Something what I liked about Shanthappa Babu which was highlighted in a daily national newspaper is that he not only likes what he is doing as a traffic cop, but pens down some of the instances/incidents that happens daily in the traffic world, and then compiles them into stories and poems. While other traffic cops may not record their experiences, Shanthappa Babu writes them in a his small pocket notebook, which he later converts them into a poems, or a short stories. Amazing but true- and I wanted to meet this guy, and I did and here you have more history on him.

Quite knowledgeable with traffic rules and regulations, Shanthappa can tell the motorists as to which rules they have violated and what would be their consequences, regarding fines or other punishments- “Smart Cop” Babu knows them all. Born to Babu and Yamuna, Shanthappa hails from Sajipa Padu in Bantwal taluk, and in 2002 after completing his PUC, he joined the police department, which he thinks is the best decision he made because he being the first among other family members to get a government job. His efforts and hard work in his police career, has now earned him the Head Constable post at the Mangaluru West Traffic division.

Due to financial drawbacks, he had to discontinue his studies even though he had secured 68 % in PUC final exams. But he never gave up, he once again made up his mind to continue his studies, and so he did his correspondence course in BA through Mangaluru University, where he secured 57%. Presently he is pursuing his studies in MA in Kannada at Mangaluru University. He had also appeared for the KSA exams, but unfortunately failed to complete it twice- but Shanthappa is very much determined to reappear again for the KSA exam and pass it. Best of luck Babu, from Team Mangalorean!

When asked what made or who inspired him into the hobby of writing stories or poems, he replied ” I was very much inspired by the writings of Prof Bhuvaneshwari Hegde, who happens to be a noted humour writer. I am so overwhelmed that the preface for my book ‘Masti Maja 205’ has been written by Hegde. Prof. Hegde has been my mentor and guiding force in my writing spree. He has also praised me during public functions for my efforts and achievements in my writing talents in spite of my busy schedule as a traffic cop”.

When asked how does he put up with arrogant motorists who come up with excuses when they get caught for any traffic violations, for which he replied, ” I don’t heed to any arguments or silly excuses that motorists pose at me when they are stopped for traffic violations. They need to use their common sense when they drive or ride around, by following the traffic rules. Just by ignoring the rules, and then try to come up with excuses and argument when caught, I don’t entertain such people. But in few cases if their excuses prove to be genuine, then I give them a break and urge them to be careful next time. I come across may funny excuses from these traffic violators that I love to incorporate/compile as stories or poems in my next book.”

“My work gives me enough grist to pen poems or write articles. Both sweet and bitter experiences are common on roads and also the subject of my writings. I meet hundreds of people daily and closely observe their behaviour on roads. While I see many educated people caring two hoots for traffic norms, I have also seen many Good Samaritans risking their lives to save others. All these scenes remain etched in my mind, and I derive ideas from them for my poems and short stories. Sometimes, I just jot them down in a small diary for future reference. I never let my writing affect the job.” said Shanthappa.

Being on the road for may years as a traffic cop and come across many experiences dealing with the motorists and pedestrians, Shanthappa Babu who decided to bring out a book of all these experience as a traffic cop with a touch of humour in it, was able to come out with his compilations of 13 humour stories, in a book named ” Masth Maja Traffic-2015″. Couple of the homour quotes in his book are “You may get an eye from an eye bank or blood from a blood bank. But you can’t get a head if you lose it in a road accident!” (referring to the importance of use of helmet); and another one- “There is no need for a speed breaker in front of a ‘Women’s College’.(Referring to Besant Women’s College)- Vehicles automatically slow down?”.

Shanthappa Babu not only writes poems, but also attends poetry sessions and recites poems at literary conferences. He is thankful to his friends, his superiors and colleagues at the police department for encouraging and supporting him in his passion towards writing stories and poems. He is planning to bring out yet another book which will be exclusive of short stories- release date is yet to be finalized.

Speaking to Team Mangalorean, ACP Tilak Chandra – Traffic Sub-Division said, ” Shanthappa Babu has been performing his duties to the sheer satisfaction of the department. He performs his duties with interest, honesty, dedication and commitment which is very much needed in the police force. Apart from his police job, his interest in writing stories and poems should be complimented, and he does it without any interference to his regular police job. Wish him all success in his writing talents and also in his police career”. Uday Nayak- ACP-Central Traffic Sub-Division has said, “Shanthappa Babu is a punctual cop and a hard worker. His passion for writing does not deter him from discharging his duties honestly. Since policemen work under a stressful atmosphere, one should engage in such extra-curricular hobbies”.

Team Mangalorean wishes Shanthappa Babu all success in his endeavors, either in his police career or in his career as a budding writer/poet. Best of luck!