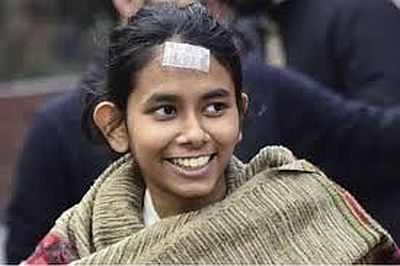 Kolkata: A day after she was denied permission to address students at Calcutta University, Jawaharlal Nehru University Students Union President Aishe Ghosh was not allowed to campaign for the Jadavpur University Student union election.

With the JU authorities not allowing her to address the students inside the campus, Ghosh, a Student Federation of India leader, spoke at a meeting outside the university premises.

The JU authorities have claimed that outsiders have never been allowed to campaign in the student union elections in the university.

The issue came up in the state Assembly, where a leader of the Left Front Legislature Party Sujan Chakraborty asked why Ghosh was not allowed to enter the CU campus and address the students.

An irritated West Bengal Chief Minister Mamata Banerjee said too much politics was being played over the denial of permission to one person.

In an oblique reference to Ghosh, who had sustained a head injury when she was beaten up by masked individuals in the JNU hostel, Banerjee said so much was being said over one blow on the head and reminded Chakraborty how she was beaten up with sticks near her home in south Kolkata’s Hazra in 1990.

Banerjee had sustained severe head injuries after she was hit on the head multiple times on August 16, 1990, when she was leading a Congress procession in Hazra crossing in support of a bandh called by her party.

“Do you remember what you people had done to me?” Banerjee asked Chakraborty.

Regarding Chakraborty’s allegation that democracy was under threat in the state with the opposition not being allowed to hold its programmes, Banerjee said the highest number of rallies and meetings are held in Kolkata.

“We allow all rallies. But still they say there is no democracy in Bengal,” said the Chief Minister.

She also addressed students at the Presidency University, after the authorities gave her permission.

Taking potshots at the state’s ruling Trinamool Congress, Ghosh said the situation in Kolkata was the same as in Delhi.

“In Delhi, those opposing the Citizenship (Amendment) Act and the National Register of Citizens exercise are not allowed to voice their opinion and speak. We are seeing a similar situation in Bengal,” she said.

However, Ghosh said the real fight was with the Rashtriya Swayamsevak Sangh and Bharatiya Janata Party and all those opposing these forces should come together.