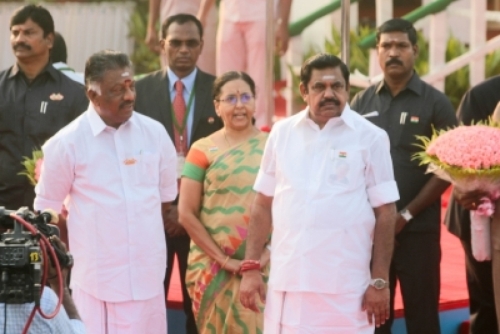 Parties in TN root for job quota for Tamils

Chennai: Political parties in Tamil Nadu are in favour of reserving a percentage of jobs in organised private sector for the residents of the state.

The extent of quota in the state is more than the 50 per cent cap prescribed by the Supreme Court.

Interestingly, the first call for job reservation in private sector in Tamil Nadu was given by PMK in mid 1990s when Ford Motor set up its plant near here.

“When Ford Motor set up its car plant in Maraimalai Nagar, I organised a protest gathering about 10,000 people demanding the locals be appointed in all the posts,” PMK Founder S.Ramadoss said.

The demand for job reservation for locals has gained ground amid the controversy over north Indians being appointed in central government posts in the Tamil Nadu and also a large influx of people from other states like Bihar, Uttar Pradesh, Assam.

“We are not demanding job reservation only for Tamilians or the sons-of-the-soil. Our demand is that reservation should be for people who are living in the state for a minimum number of days,” Arul Rathinam, President, PMK Social Media Wing told IANS.

He said the job reservation demand is in the organised private sector and not in the unorganised sector like shops and others.

On Wednesday, the PMK, an alliance partner in the ruling coalition, urged the government to pass a law reserving 80 per cent jobs in private sector to the people of the state.

In a statement issued here, Ramadoss referred to the law passed recently in Andhra Pradesh, mandating 75 per cent of the private sector jobs for the people of the state, and said after liberalisation of the economy, the availability of jobs in the state and central government departments in Tamil Nadu has gone down by one-third.

“Hence only private sector can provide decent employment opportunity. But the private sector owing several reasons does not provide employment to the people of the state. It is important to reserve certain percentage of jobs to the local people,” Ramadoss said.

“Our leader M.K.Stalin-DMK President- had stated there should be some sort of reservation in the private sector jobs for the people of the state. There should be a fine balance between jobs reserved for jobs and the open category so that there is no disharmony,” DMK Spokesperson A.Saravanan told IANS.

“We can’t say outsiders should not come to Tamil Nadu seeking jobs in private sector. Both the extreme – no jobs for outsiders and all the jobs for the outsiders – will create disharmony,” Saravanan added.

Will such a restriction not impact the flow of investments?

“Tamil Nadu will continue to get investments owing to its skilled labour and infrastructure. Further various tax incentives are given to industries on their investment. Investors decide on their investments taking such aspects and not just the availability of cheap unskilled labour,” C. Ponnaiyan, former Finance and Law Minister of Tamil Nadu and AIADMK’s State Organisation Secretary told IANS, while expressing his “personal views”

The people should question non-performing state governments for failing to create jobs, resulting in migration of population to developed states like Maharashtra, Tamil Nadu, Andhra Pradesh and others, Saravanan said.

Such a situation should not be exploited by other states which are lagging in industrial development. It is the job of the government of those states to create job opportunities there and prevent migration, was the general view of the political parties.

“The people living in below the poverty line (BPL) without employment opportunity are very high in Tamil Nadu. The accommodation of labourers from other states in Tamil Nadu industries, trade and commerce will jeapordise the livelihood of the poor able-bodied workforce of Tamil Nadu. Unless checked on time, this situation maybe exploited by negative minded political forces and create unrest in the state,” Ponnaiyan said.

R.Srinivasan, Secretary, Tamil Nadu Hotels Association (TNHA), hoped the hotel industry will be exempted from the ambit of any law on jobs for locals in Tamil Nadu.

Many hotels here have youth from North East working as table cleaners.

“In hotel industry, up to server level, one can get local labour force. But for cleaning the tables, utensils and others, one has to depend on the labour from outside the state even though we give more than the minimum wages,” Srinivasan told IANS.

“Those who come to work in hotels consider it as a temporary job. From villages they come to the city to work in a hotel which provides food and shelter. After sometime they move on to some other sector,” he said.

“The boys and girls in the rural areas are educated now and they are not willing to work in the farm. They migrate to the city seeking better earnings,” Srinivasan said.

According to PMK’s Rathinam, it is strange to say that there is lack of workforce in about seven crore population of Tamil Nadu and that it forces companies to hire people from outside the state.

He went on to ask, “Why should software companies hire people from other states when there is talent in the state?”

Meanwhile industry lobby bodies and corporate officials declined to comment on the subject when IANS contacted.