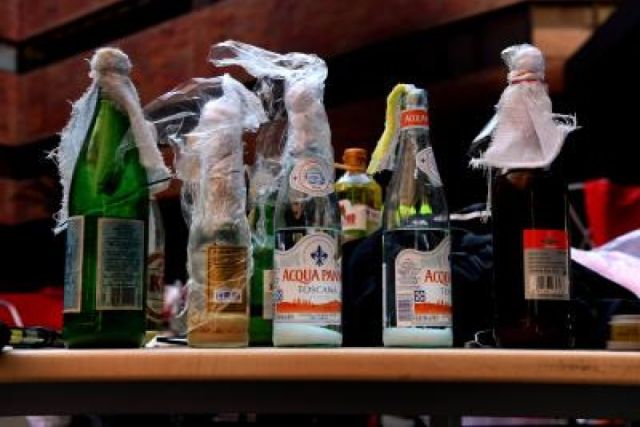 Hong Kong: Over 40 petrol bombs and other weapons were found on the wrecked campus of Hong Kong’s Polytechnic University, after police lifted a 13-day cordon around the premises which was the scene of violent clashes between anti-government protesters and the force.

Police said on Monday they were alerted by the varsity on Sunday afternoon to a small number of petrol bombs and dangerous chemicals still on the grounds after the initial clear-up, reports the South China Morning Post.

Both the police and fire departments said the removal operation had to be suspended because of protests in the area on Sunday. They planned to return to the campus on Monday to pick up the remaining weapons.

Earlier, the university said in a statement that 20 petrol bombs and several offensive weapons were found on the campus on Sunday morning.

With the grounds dangerous for students and staff, management asked for their understanding that access could not be granted to the site on Monday and Tuesday.

More than 1,000 radical ­protesters and their supporters occupied the campus and engaged in fierce battles with police on November 17, the South China Morning Post said.

They blocked the roads near the university leading to the Cross-Harbour Tunnel and started fires on nearby bridges.

The force responded with tear gas, sealed all campus exits and asked all those inside to leave.

About 1,100 people came out in the days that followed, although some escaped.

Those aged 18 or above were arrested on suspicion of rioting, while about 300 minors were let go after recording their details.

Since the clashes erupted, a total of 3,989 petrol bombs, 1,339 pieces of explosives and 601 bottles of corrosive liquid were found, whereas 573 weapons have been seized.